Why does PM fear disobedience?

Op-ed: Uprooting of Arabs viewed in Israel as abomination, while expelling Jews has become the norm

People refer to the forced removal of Arabs as part of any future agreement as expulsion, uprooting or transfer, yet when those who are expelled are Jews, it is only the "extreme right" that uses these terms to describe the act. The tragedy of Jewish expulsion from Gaza and northern Samaria is dubbed "evacuation."

Citizens were expelled by their own countries only during the rule of such monsters as Stalin – who uprooted the "Germans of the Volga" and the Chechens only out of the fear that they would join the Germans who were advancing toward their regions. The State of Israel holds the patent on the phenomenon whereby a country uproots its own people. This does not exist anywhere else in the world. Menachem Begin and Ariel Sharon invented this anomaly. While all cultured nations view the expulsion of populations as "ethnic cleansing" and a crime against humanity, in the state of the Jews, and only there, it is the norm – on the condition that those who are expelled are Jews.
West Bank
Great year for settlers
Hagai Segal
Op-ed: Leftists rejoice in Migron evacuation, but they know Right has won West Bank war
Great year for settlers
In 1990 Yossi Sarid and Yair Tsaban wrote in Yedioth Ahronoth: "We are against (IDF soldiers') refusal to serve in the territories, but the day the order to transfer (Palestinians) will be given will also be a day of refusing orders." Moshe Negbi, the "high priest" of the rule of law, wrote: "If sovereignty will be applied without granting voting rights to the Arabs, I will consider disobedience to be justified." Amos Oz went even further, saying "In the face of the expulsion and exile of the Arabs – we will not let you do it, even if it means dividing the state and the army." These comments did not spark the same uproar as Naftali Bennett's interview with Channel 2's Nissim Mishal, in which the Habayit Hayehudi chairman said that if he "received an order to evacuate a Jew from his home, my conscience would not permit me to do so and I would ask my commanding officer to excuse me." This is because the uprooting of Arabs for diplomatic purposes is justifiably viewed here as an abomination, so disobedience is accepted as something that is only natural. But the expulsion of Jews has become the norm, so refusing to take part in it draws harsh condemnation. 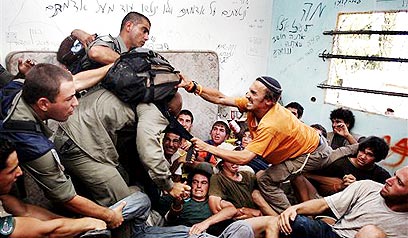 Particularly repulsive is the artificial outcry of Likud leaders such as Netanyahu, who declared that Bennett "will not sit in my government"; and Ya'alon who said Bennett's remarks "shocked" him; or Erdan who claimed the remarks caused "severe damage to the IDF." Does this mean we should expect more expulsions from the Likud? And if not, let's see Likud promise that it will not expel any more Jews under any circumstance and enact a law forbidding "expulsion and uprooting."

In 1995 Ariel Sharon, who carried out two expulsions, replied to the same question Bennett was asked by saying "As someone who served in the army for many years I say – a soldier must follow orders, and if he feels the order goes against his conscience, he should explain the situation to his commander and be prepared to suffer the consequences." Bennett repeated Sharon's instruction almost word for word. In 2004, as a response to Ariel Sharon's plan to withdraw from the Gaza Strip, Netanyahu's father, the late Professor Ben-Zion Netanyahu and several other hard-liners signed a manifesto urging officers, soldiers and police to disobey orders to dismantle Jewish settlements. The petition called on them to "listen to the voice of their national and human conscience and not participate in acts that will tarnish them, and that they are liable to regret all their lives." The PM's brother Iddo, his uncle, Professor Nathan Netanyahu and Attorney Dafna Netanyahu, Iddo's wife, also signed the petition. Where is Benjamin Netanyahu leading his party after he has distanced himself so much from his relatives' ideology?