'He will be on Israel's side.' Hagel
Photo: AP

Powell says Hagel 'doesn't have to agree with Israel on everything'

Former US Secretary of state defends Obama's choice for defense secretary; says he is a 'very strong supporter of Israel,' but should have said 'Israeli lobby,' not 'Jewish lobby.' McCain: Why would he oppose calling Iranian Revolutionary Guard a terrorist organization?

WASHINGTON - Chuck Hagel is "a very, very strong supporter of the state of Israel," Former Secretary of State Colin Powell said Sunday of President Barack Obama's choice for defense secretary, adding, "that doesn’t mean you have to agree with every single position that the Israeli government takes."

Speaking to NBC's "Meet the Press," Powell said "My judgment and my knowledge of Chuck and my discussion with Chuck would suggest that he wants to see both sides come to the table and find a solution. He supports the peace process. But he is uppermost, a very, very strong supporter of the State of Israel.

"He's voted for billions and billions of dollars of aid to Israel. So, I have no question that when it comes to challenges that have anything to do with putting Israel at risk, Chuck Hagel will be on Israel’s side," the retired general and former secretary of state predicted.

Powell said that efforts to describe Hagel as an anti-Semite are "disgraceful" and that basing the accusation on his reference to the "Jewish lobby" is unfounded.

"Chuck should have said 'Israeli lobby' not 'Jewish lobby' and perhaps he needs to write on a blackboard 100 times, 'It is the Israeli lobby,'" Powell said on NBC.

"I'm very supportive of the State of Israel, so is Senator Hagel, and you will see that in the confirmation hearings," said Powell.

"But it doesn't mean you have to agree with every single position that the Israeli government takes," he added.

Hagel was last week picked by Obama to take charge at the Pentagon, but he faces a tricky Senate confirmation hearing given skepticism among some US lawmakers, especially over several past remarks regarding Israel.

Critics of the maverick Nebraska Republican took to Sunday television news programs to drive home concerns that Hagel opposes sanctions and is satisfied with containing Iran, as opposed to preventing it from obtaining a nuclear weapon. 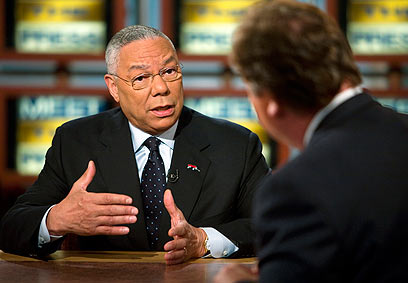 'Force is on the table.' Powell (Archive photo: Gettyimages)

Addressing the criticism, Powell said "I think what Chuck Hagel has said is that nothing is ever off the table, but he's one who believes in the prospects for negotiation. We have been ready to negotiate under the right set of circumstances with Iran for the last several years with our friends and allies and so, force is on the table, but I’m glad that we have people like the president and like Chuck Hagel who will be very careful." Tennessee Republican Senator Bob Corker reiterated concerns about Hagel's views on Iran, Israel and US nuclear weapons modernization, but also aired another charge against him: His temperament. "But I think another thing that's going to come up is just his overall temperament, and is he suited to run a department or a big agency or a big entity like the Pentagon," Corker told the ABC's "This Week." "There are numbers of staffers who are coming forth now just talking about the way he has dealt with them," added Corker, without elaborating. Corker's office did not immediately respond to an e-mail requesting details on the alleged staff complaints. Senator John McCain, R-Ariz., said that at this point would not vote for or against Hagel, his friend and 2000 presidential campaign chair, to replace Defense Secretary Leon Panetta, citing "significant questions" that remain for Hagel to answer during his Senate confirmation hearing.

"I honored Chuck Hagel's service. He's a friend," McCain said Sunday on CBS News' "Face the Nation." "My questions about him - and they will be raised in the nominations - are, what is his view of America's role in the world? Whether he really believes that the surge was the worst blunder since the Vietnam War. That clearly is not correct; in fact, it's bizarre. Why would he oppose calling the Iranian Revolutionary Guard a terrorist organization? (It's the) same outfit that's on the ground now in Syria killing Syrians, same outfit that was exploiting the most lethal IEDs into Iraq killing Americans."

Hagel said a few days ago that there is "not one shred of evidence that I'm anti-Israeli, not one (Senate) vote that matters that hurt Israel.

"I have not supported unilateral sanctions because when it is us alone they don't work and they just isolate the United States," he said.

Israeli officials confirmed that the political establishment was concerned about Hagel's past statements, but one official said the government plans to "keep an open mind."

"At the end of the day what will matter is the policy led by Obama. If he will commit to preventing a nuclear Iran by any means, then every member of the administration will be committed to this," a senior Israeli official said. "When all is said and done, what matters are the deep strategic relations between the countries – beyond the personnel issue."