Op-ed: Republican senators were the only ones who passionately grilled Hagel on his lack of support for Israel

Watching the Chuck Hagel US Senate confirmation hearings for secretary of defense, I almost became physically sick. To watch my fellow Jewish senators, all liberal Democrats, suck up to Obama and Hagel with softball questions against the interests of their own people and Israel was more than I could handle. The spectacle of southern Republicans senators, with almost no Jewish constituents in their states, standing up for the Jewish people and Israel against Hagel's evasive and nonsensical responses, while fellow Jews sat idly by, will stick with me for a long time.

Bless the Republicans for doing what is right while shame on my fellow Jews for not learning from history. The actions of these Jewish Democrats concerning the Hagel nomination do not bode well for the future of our people or Israel.
Controversial Nomination
Israel's nightmare
Sever Plocker
Op-ed: Possible appointment of Hagel as defense secretary result of Bibi's support for Obama's rivals
Israel's nightmare

Committee chairman, Democratic Jewish Senator Carl Levin, who prior to the hearing had already indicated his support for Hagel's nomination by calling him "well qualified, included in his opening remarks only a reference to Hagel's "troubling statements" concerning Iran without specifics or follow up, with not even one mention of Israel. During the hearing it was Levin who called Hagel "a person of integrity" and came to his rescue when Hagel was confused about US policy regarding Iran and containment.

The other Jewish senator on the committee, Richard Blumenthal, totally ignored Hagel's record concerning Israel and only murmured his dismay that a man who had served the country had to endure strong inquiries from the Republicans. After the hearings, he stated that he would support Hagel despite the fact that most observers believed that Hagel looked confused, uninformed, and ill equipped for the position during the hearing.

It was the Republicans who were the first and only senators who challenged Hagel's previous statement on the Jewish lobby. "The political reality is … that the Jewish lobby intimidates a lot of people up here,” Hagel told former Mideast peace negotiator Aaron David Miller in a 2006 interview. “I have always argued against some of the dumb things they do because I don’t think it’s in the interest of Israel. I just don’t think it’s smart for Israel.” Senator Roger Wicker, a Mississippi Republican, pressed Hagel on whether he still believes that is true. 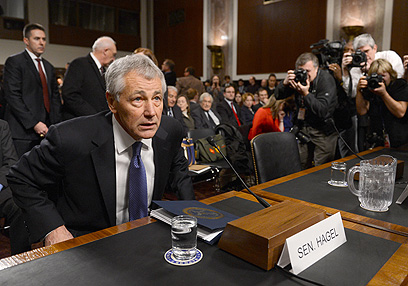 Republican Senator Lindsey Graham of South Carolina followed up by asking Hagel to "name one senator" who had been intimidated in that way by AIPAC and name "one dumb thing we (Senate) have been goaded into doing because of the pressure from the Israeli lobby," adding "I cannot think of a more provocative thing to say about the relationship between the US and Israel."

Despite the fact that 69% of the Jews voted for Obama and donated heavily to the Democratic Party, the Republican senators were the only ones who passionately grilled and interrogated Hagel on his lack of support for Israel, while all the Democratic senators tried to cover up this fact. Hagel was confronted by several Republicans for refusing to sign congressional letters seeking a terrorist designation for the militant Islamist group Hezbollah and the Iranian Revolutionary Guards. The ranking Republican senator James Inhofe of Oklahoma reminded the committee that in 2000 an overwhelming majority of senators sent a letter he sponsored to President Clinton reaffirming their solidarity with Israel during Arafat's terror campaign and Hagel was one of just four who refused to sign the letter. Senator Graham, referring to the letter, told Hagel "the lack of signature by you run chills down my spine." A month before his death, Ed Koch, the former mayor of NY, told the Algemeiner Journal that he hoped that Democrats in Congress will oppose Hagel's appointment, saying "if Hagel is not confirmed it'll be because the Republicans take him on and a few good Democrats." But in reality not even one Democrat was good enough to join the Republicans, including the eleven Jewish Senators. Many leading Jewish Democratic senators and congressmen who are known to be pro-Israel were in a rush to publicly endorse Hagel weeks in advance of the hearing. The leading Jewish Senator Schumer from NY needed only 90 minutes of conversation with Hagel to come out in support of him and to encourage his Senate colleagues to also support him. Senators Boxer, Feinstein, and Congresswoman Wasserman, the chairman of the Democratic National Committee, stated that even though they were concerned with his comments about the "Jewish lobby" and his voting record, they accepted Hagel's regrets and apologies and his verbal reassurances about supporting Israel and facing Iran. Purim is coming soon and we will read the Book of Esther. After Queen Esther told Mordechai, her uncle, that she cannot go to the king and plead with him to save the Jewish people because she worried about her own self survival, Mordechai relayed to Esther the following words: "Do not think that you will escape the fate of all the Jews by being in the king's palace. For if you will remain silent at this time, relief and salvation will come to the Jews from another source, and you and the house of your father will be lost. And who knows if it is not for just such a time that you reached this royal position."

I hope the Jewish senators, congressmen and other influential Jews who serve in Obama's administration remember these words before it is too late.