Age of innocence over

Op-ed: Obama's visit to region will bolster US-Israel ties, but it will not reignite peace process

One of the few things Israel and the Palestinians have always agreed on is that almost everything, if not everything, is the US' fault. Israel and the Palestinians are exempt from finding a reasonable solution to the conflict because everything is "US policy." The president "doesn’t understand," is "too involved" or "not involved enough." His advisors "have yet to decipher the complexity of the Middle East." America's policy is "naïve" because the Americans, in general, are "naïve."

Three months after President Obama's scheduled visit to the region, any Israeli-Palestinian agreement that is reached will be rejected by both sides. "The president was wrong," they'll say, "his ideas were premature and the situation is complicated." Obama, for his part, will focus on foreign policy issues that are at the top of Washington's agenda: China, North Korea and Pakistan.
US Policy
Kerry determined to resolve conflict
Yitzhak Benhorin
Analysis: Unlike Obama, top US diplomat has not lost faith in stalled Israeli-Palestinian peace process
Kerry determined to resolve conflict
And yet, two months after his second inauguration, Obama will be visiting the region. From Israel's standpoint, any presidential visit is important. Since its inception, Israel's most important strategic-diplomatic asset has been its relations with the US, and every presidential visit bolsters the strategic ties. The visit becomes even more important when we consider the fact that the US is expected to detach itself from the Middle East in the coming decade because the focus of its foreign policy will shift and also in light of its " energy independence" and zero dependence on oil from the region. In addition, domestic issues currently top Washington's agenda, and the voting public that elected Obama twice is less interested in foreign policy and does not support "adventures" in the Middle East or "entangling alliances," which Thomas Jefferson warned against in his inaugural address in 1801. 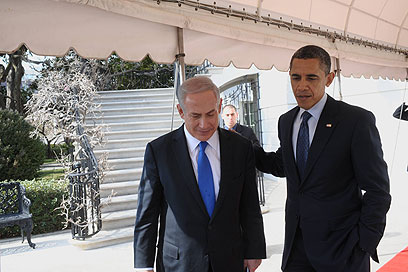 On the other hand, the US recognizes the instability in the Middle East and the potential for a flare-up: Syria is being ripped apart; Egypt is in the midst of an unexpected process of changes; the Palestinian Authority is weaker than ever and the Americans fear for its existence; Jordan is frozen in time and Saudi Arabia and the Gulf States fear that Iran will go nuclear. Therefore, Obama's visit will focus on Iran and Syria, on America's diplomatic options and on trying to coordinate positions with Israel. The US expects Israel to avoid taking any unilateral measures that are not consistent with its policy objectives.

The relations between the security establishments of Israel and the US are solid, but for a few years now Washington has been under the impression that Israel's diplomatic corps is not attentive and disregards American interests. The president hopes to rectify this situation. Obama is not really naïve, nor is he surrounded by dreamers. American policy may lack sophistication or creativity at times, but the president is under no illusions when it comes to the Israeli-Palestinian peace process. He is well aware of the difficulties involved in implementing the "two-state" model at this stage and understands that the gap between Israel and the Palestinians is too wide at this point. The equation is quite simple: Netanyahu cannot and no longer wants to accept the "Clinton outline" from 2000-2001 or the Olmert-Abbas agreements from 2008. He cannot agree to a Palestinian state with "temporary borders" because this would require new maps that do not include certain settlements. The Palestinians cannot accept futile negotiations "without preconditions" and without taking past agreements into consideration. A mock process would cause them to lose the support of the international community. The idea that the process can be reignited with declarations and perhaps a three-way summit in Washington is ludicrous. Moreover, Obama is not coming with an original plan of his own to bridge the gaps. Rather, he is, at best, going to present a package of "trust-building measures." Therefore, the visit is an important one, but not in relation to the "peace process," which will remain frozen until a new, paradigm-breaking way of thinking emerges.