Op-ed: Law defining terror would make it difficult for Europe to blame Israel for all of Mideast's problems

The US and Israel have common values – at least this is what people say in front of the cameras during official visits. After the kind words comes the closed meeting phase - the demands. In Obama's and Netanyahu's case, the familiar sour faces also appear very quickly.

The Americans' interests are different than Israel's: A peace agreement with the Palestinians, Israel bowing its head before Turkey and a promise that there are no intentions of attacking in Iran. The Americans are supported by the weight of the European countries. Israel is supported only by its claims. But the situation is different when it comes to the war on terror. The Israelis are backed by the Americans against the European position. We were reminded of this recently when Bulgaria released the findings of the investigation into the July 2012 terror attack in Burgas. Sofia said Hezbollah was responsible for the bombing, and the European Union (which Bulgaria is a part of) mumbled uncomfortably.
Gaza Photos
The truth about terrorism
Yigal Walt
Op-ed: As Gaza kindergarten photos show, terror is an ‘acquired taste’ imparted through education
The truth about terrorism
Since the end of the Second World War, the Western world has had trouble defining what terror is. Seemingly, this is an academic question for political science researchers. But in actuality, definitions affect actions. When you cannot define a common enemy, it becomes difficult to cooperate in the fight against this enemy. The cliché says "one man's terrorist is another man's freedom fighter." In Europe clichés have the power of policy, and when Palestinian terror flourished, these clichés helped people bury their heads in the sand. It was convenient for the Europeans to view the Palestinians' actions as a legitimate struggle. On the one side there was the occupying Israeli army, on the other a militant organization. The fact that the Palestinian organizations operated against civilians changed nothing: The terror groups' leaders traveled freely all across Europe, raising money and initiating terror attacks. Some of these attacks, by the way, were carried out on European soil. Behind the scenes the cooperation between Israeli and European intelligence agencies was increasing, but the European leaders found it even more difficult to recognize terror for what it was. 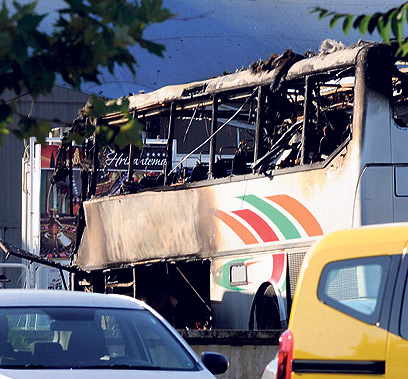 The Americans, on the other hand, classified Hezbollah as a terror organization in the 1990s. They got their first lesson in terrorism during the lethal suicide bombing on October 23, 1983 in Beirut, Lebanon, which killed 241 Marines. The sites were difficult, the trauma even more so. Since then there were additional lessons. Israel successfully recruited the US, but it failed in Europe.

Those who are looking for the line that separates the two continents will find it there – in the definitions of terror; not in the approach to Israeli policy vis-à-vis the Palestinians, but in the attitude towards the armed militias in the Arab world. The Europeans look at the Middle East and see a region with many cultures. The Americans see danger. Bulgaria's declaration that Hezbollah was behind the Burgas attack put the Europeans in a healthy dilemma as far as Israel is concerned, and moments such as these cause officials in the Foreign Ministry to rub their hands together delight: Now the Europeans have to decide what to do about their own results. Can they accuse Hezbollah of planning and carrying out a terror attack without classifying it as a terror organization? This is also true for Europe's approach towards Hamas. The European predicament presents an opportunity for Israel. Efforts are currently being made to introduce a law to define terror in the European Union. If these efforts bear fruit, the definition will lead to a conflict with facts. The Europeans will find it difficult to ignore Iran's involvement when the terror organizations are designated as such. Despite Europe's tradition, such a law would make it hard for it to automatically point an accusatory finger at Israel every time something bad happens in the Middle East.