PM to Obama: Israel cannot cede right to self defense

US President Barack Obama and Prime Minister Benjamin Netanyahu held a joint press conference on Wednesday after a lengthy meeting at the prime minister's residence.

Netanyahu addressed the press conference first and thanked Obama for previously hosting him in Washington. "I hope the good will and warmth of Israeli people made you feel at home," he told the US president.

He stated that the main issue discussed in the meeting was the Iranian issue and noted that Obama had stated clearly that he intends to prevent Iran from obtaining a nuclear weapon.

"Today we have both the right and the capability to defend ourselves, as you said. Today the essence of the state of Israel is the fulfillment of the age old dream of the Jewish people to be masters of our faith. This is the essence of the state, this is how I know that you appreciate we can not cede our right to defend ourselves even though you are our greatest friend and Israel has no greater friend that US."

Addressing the Syrian issue, Netanyahu said: "We must stop the carnage seen in the last two years. We share a motivation of stopping the chemical weapons from falling to terrorist hands and I know the best way to do so is to work with other nations in the area as well as the US."

Finally, commenting on the Israeli-Palestinian conflict, the prime minister said: "Israel remains fully committed to the solution of two states to two peoples. We extend our hand of peace to the Palestinian people."

Netanyahu expressed hope that Obama's visit will help Israel achieve peace with the Palestinians. "Let us sit down and negotiate without preconditions, let us bring peace."

Obama on his part promised to work closely with Israel and do whatever is necessary to keep Iran from obtaining nuclear weapons, "the world's worst weapons." He also pledged to investigate whether chemical weapons were used this week in the neighboring Syria's two-year-old civil war.

"We prefer to resolve this diplomatically and there is still time to do so," he said. But he added that "all options are on the table" if diplomacy falls short.

"The question is, will Iranian leadership seize that opportunity," he added. The president said Iran's past behavior indicates that "we can't even trust yet, much less verify."

"We agreed that a nuclear Iran would be a threat to Israel, the region and the world. We do not have a policy of containment, our policy is to stop a nuclear Iran and there is still time to do so," he said.

Obama addressed reports of the use of chemical weapons in Syria and said that US teams are working with countries in the region as well as with international organizations to try to understand whether a red line had been crossed. 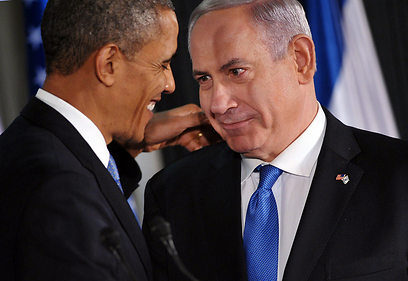 Obama also reaffirmed his commitment to Israel's security. "My job as president is to keep the American people safe. Bibi's job is to keep Israel safe. In past trips I have visited destroyed homes, I visited Sderot and met children that want to live in peace.

"As president I have made it clear that American commitment to Israeli security is nonnegotiable, we hold more security and training than ever before. And the includes more support for Iron dome which has saved lives."

He further added, "America's support for Israel is unprecedented and the connection has never been better as was shown today." The US president stated that he discussed with Netanyahu an extension to military cooperation and stated that the US we took steps to make sure there is no threat tot the funding of Iron Dome.

"Israel will receive 200 million in aid, this is our guarantee that Israel will continue to hold a qualitative edge."

Addressing the Palestinian issue, Obama said he did not want to make grand statements not matching the reality on the ground. He emphasized that he intended to listen first, before he spoke. Obama stressed that it was in Israel's clear interest to establish a sovereign Palestinian state. He also noted the fact that the previous year did not see any Israeli killed in a West Bank terror attack.

Obama said this was a reminder that Israel has an interest in keeping a strong and stable Palestinian Authority." We must find the basis to build lasting trust on which such a peace can be based," he said. 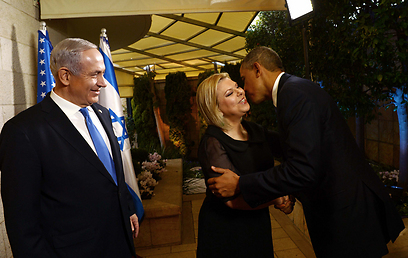 Obama wrote: "It is a great honor to reaffirm the extraordinary bond between our two countries. By every measure, from security to our economy, our cooperation has never been greater, and that in part is because of the strong commitment of Prime Minister Netanyahu. May our bound continue to grow on behalf of people and prosperity for all people."

The president earlier met with President Shimon Peres at the President's Residence.

After meeting with Peres, the two gave brief statements. Peres said, "It is a real pleasure to sit with a true friend. "After the meeting I have more confidence that your vision can transform the Middle East. You arrived here with an impressive record, particularly in the field of security and I want to thank you very much for many sleepless nights.