Op-ed: In Jerusalem speech, US president went over the head of a prime minister he does not trust

Try to imagine for a moment what would happen if Prime Minister Netanyahu would speak before American students at Columbia University and call on them to rise up and demand that their politicians block any gun control legislation or encourage the students to act determinedly against President Obama's health care law. What an uproar such an act would have caused in the US and the world over – and justifiably so. The prime minister of Israel, the headlines would say, is intervening in the most sensitive issues of American politics.

Obama took off his gloves during his speech in Jerusalem. In front of a captive and adoring audience, he called on young Israelis to wake up, stop being indifferent and take their future into their own hands. He urged them to prod their politicians into action and push them toward achieving peace with the Palestinians while not ignoring the facts related to demographics, security and the occupation. The call was perfectly packaged in thousands of beautiful words that evoked a sense of security and calm in every Israeli – mainly because they were spoken by the president of the United States.
Presidential Visit
Through Obama's eyes
Alon Pinkas
Op-ed: US president sees Israel as a strong country which must make decisions rather than seek sympathy
Through Obama's eyes
But the truth cannot be ignored: In his speech, Barack Obama encouraged the Israeli public to rebel; to rebel against the concept that has existed here for the past 20 years; rebel against the narrative of PM Netanyahu and the Right; rebel against the Barak-Sharon-Netanyahu legacy, according to which there is no one to talk to on the other side, Mahmoud Abbas is no different from Ismail Haniyeh and settlement construction must continue. Despite the expressions of fondness toward Netanyahu, the American president does not believe the Israeli leader. He does not believe his statements and does not trust his intentions vis-a-vis the Palestinian issue. Four years were enough for him to understand who he is dealing with. Even the appointment of Tzipi Livni as the head of the negotiations with the Palestinians was not enough to convince Obama that Netanyahu's position had changed. 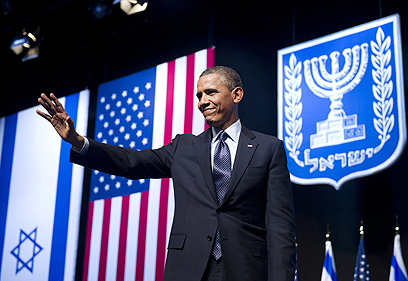 This is why Obama bypassed Netanyahu in his speech and spoke directly to the Israeli people, right over the prime minister's head. This is who I am, Obama said, this is what I believe: I will protect and help you, but I will not cut you any slack with regards to the Palestinian issue. You, the Israelis, already have a state, and they, the Palestinians, are being smothered under the occupation. I am familiar with the excuse, Obama said between the lines. I've heard it all and I can recite the list of all the threats, disappointments and frustrations that have been accumulated over the years. But excuses are not a plan. A Palestinian state, on the other hand, is, so get moving.

During the first day of his visit Obama played by all the rules dictated by the Israelis: He hugged Bibi, took a photo with the Iron Dome, complimented the prime minister's wife and slammed Iran. But in America, such compliments come with a price tag, and the price was the speech at the International Convention Center in Jerusalem. Obama took advantage of his second day in Israel to put on the agenda the issue that really matters to him and that he will not back down from in his second term: The establishment of a Palestinian state. To clarify just how determined he is, Obama had to come here equipped with his full arsenal. Obama's advisors did their homework and prepared an "Israeli" speech which mentioned all the right people (Begin, Rabin) and featured exact quotes (David Grossman, David Ben-Gurion) in the necessary historical context (Holocaust, historic right, Israel is here to stay). Obama said all the right words: You are not alone, Eretz Nehederet, vibrant democracy. By the time Obama began discussing the Palestinian issue, every Israeli had fallen in love with the president, who until now was called a hater and not a friend of Israel. So Obama proved that he is not a hater; but a very concerned friend who does not believe one word that comes out of the politicians' mouths. Obama has learned his lesson from the first term. Seemingly, this time around he is not trying to force anything on anyone. But his refusal to stand by the Palestinian demand for a settlement construction freeze does not mean that he supports the continuation of building in the settlements. He realizes that if he calls for a settlement freeze, the Palestinians will not be able to move an inch, as they would not be able to demand any less than what the president of the United States is demanding.

Therefore, Obama is not making any tactical demands, but he is declaring, louder than ever, what the strategic goal is – an independent Palestinian state based on the 1967 borders. And if in order to achieve this goal he has to be kind to Bibi, shower the Israelis with warm words and say a few words in Hebrew – so be it; as long as the message is heard. Now, more than ever, it seems that the message has been heard. Now we just have to wait and see how it all plays out on the chessboard of the reality in the Middle East, which will remain in place after Air Force One takes off for Washington.