The media focus was primarily on his meetings with Netanyahu and Abbas. It's clear his intent was not to jumpstart the long stagnated "peace process" between Israel and the Palestinians, since he brought no new ideas to the table.
Kerry Visit
A flight to nowhere
Hagai Segal
Op-ed: What causes a serious man such as John Kerry to believe he can succeed where others failed?
A flight to nowhere
He said he was interested in "listening" to both sides. Yet, by virtue of his speech to Israeli students in Jerusalem, he appeared to be nudging Israel's next generation into pushing leadership toward his vision of how to resolve the conflict. This means Israel will be asked to keep making all the sacrifices, while the Arabs make none. Secretary of State John Kerry has just returned as part of a new ongoing effort to jump start negotiations. Obama also seems to have backed away from what many have seen as his disrespectful treatment of Netanyahu since he came to office four years ago, as was evidenced by their warmer public banter. It's not that he feels any differently about the Israeli PM, he simply seems to realize Netanyahu won't be forced into making risky territorial sacrifices which put Israeli lives in greater jeopardy. However, this didn't prevent Obama from agreeing with Abbas' assessment of the most important issue preventing peace between Israel and the Arab Palestinians.

In his post-meeting remarks, Abbas once again made settlements the obstacle to peace, saying "peace shall not be made through….settlements." 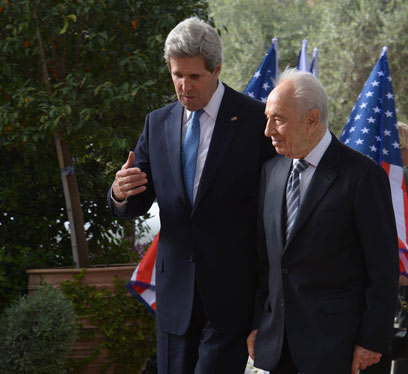 Abbas walked away from direct negotiations with Israel in 2009 over the building of settlements. Israel responded by freezing construction for 10 months, yet Abbas refused to re-engage. He has continued to abstain from direct talks and has demanded a freeze on construction before he returns to negotiations.

While standing next to Abbas, President Obama, to his credit, said requiring demands be met ahead of negotiations is pointless. Having said that, he concurred with Abbas that settlement construction is one of two key issues which are necessary to resolve the conflict. He said the other is Israel's security. However, there are two reasons why this is a misrepresentation of the facts on the ground. First, while settlements are a matter which should be discussed during negotiations, their existence cannot be compared to the right of Israel to exist. Putting them on par is a fundamental breach of moral standards. Israel's right to exist is non-negotiable, and it must be addressed first and foremost. Aside from Israel’s security having no moral equivalent, calling settlements the number one issue is baseless. Why? There were no settlements during the wars of '48 and '67. Since they didn't exist, what was the main issue then? This is where the underbelly of the Palestinians gets exposed. Settlements are not, nor have they ever been the obstacle to peace. The real issue is the Arab refusal to accept the existence of a Jewish state, period. This was the #1 issue in '48, '67 and in every other conflict since. It remains the real issue to this day. Abbas has even stated publically he will never accept a Jewish state of Israel. Accepting a Jewish state on land the Arabs covet as theirs would put Abbas squarely at odds with Hamas and all Islamist fundamentalists. It could also put his life in danger. The second reason why settlements aren't the number one issue is because the Palestinians themselves say so. A recent study conducted by the Palestinian Center for Policy and Survey Research revealed two issues which are of greater concern. The first is poverty, and the second is the strife between the various political factions. This tends to suggest Abbas is fabricating the importance of settlements, which actually makes sense from his perspective. Why? Poverty and political strife are both internal issues which cannot be blamed on anyone else. They must be addressed among themselves. By making settlements the marquee issue, he deflects attention away from the Palestinians' own problems and points the finger of blame at Israel. Avoiding their own accountability and vilifying Israel is something the Arabs have repeatedly done since Israel’s rebirth in 1948. This should come as no surprise to anyone. However what is surprising, and disappointing, is Israel's best friend, the US has taken the bait. If President Obama wants to be a broker of peace he need not have a conversation with the leaders of Israel. Peace has always been their goal. He also needs to realize what the true obstacle to peace is, and it has nothing to do with settlement construction.

Dan Calic is a writer, history student and speaker. See additional articles on his Facebook page