Op-ed: How much more bloodshed is needed for Obama to understand that Israeli concessions will not bring peace?

For many years Israel has been trying to explain to the West, including US President Obama and the liberal media, that the root of the Israeli-Arab and Palestinian conflict is extreme Islamic indoctrination to Jihad, violence, and hatred against the West, the US and Jews. However, the West, including President Obama, seems to dismiss such an argument as an excuse and insists that the roots of the conflict and lack of peace are the so-called Israeli occupation, the settlements, poverty, and a sense of humiliation and hopelessness among the Arabs, especially the Palestinians.

Now, after the horrible bombings in Boston, which killed and maimed many Americans, Obama and the liberal media seem still to be in denial of the truth and seem to be looking for any motivation other than the fact that anti-US Islamic indoctrination to hatred was the root of the Boston attack.
Boston Aftermath
Western world must wake up
Eitan Haber
Op-ed: When will Americans use their power, brains to lower flames of terror in destructive half of world?
Western world must wake up
It took the president one day after the bombings to bring himself to call the bombing ”an act of terror” and not simply a tragedy. I guess in his mind such acknowledgment would have implied that Islamic terrorism was at play. Then after the capture of the second Boston bombing suspect, the president gave another speech calling the bombers “terrorists” but never brought himself to say “Islamic terrorists.” Moreover, he scolded and warned the American people against “a rush to judgment - not about the motivations of these individuals; certainly not about entire groups of people. But the facts show that these bombers were motivated by radical Islam. Obama for years has been in deep denial of the fact that even though not all Muslims are terrorists, all those who have been committing terrorist acts against the US, Israel and the West over the last decade have been Muslims. Obama’s apology tour of the Muslim world, and his demand that Israel make endless concessions to the Palestinians reflect his disturbing world view that the US and Israel are somewhat partly to blame.

The two brothers were ethnic Chechens who were born and raised in Muslim areas of the former Soviet Union before getting asylum in the US. In 2011, the Russian government warned the FBI about the older brother's connection to radical Islam. After spending six months in Chechnya and Dagestan, two areas that are infested with global Jihadists and al-Qaida, the older brother returned and began observing a strict Muslim lifestyle. He also created a YouTube channel filled with videos glorifying holy Jihad against the West and Islamist Jihadists and preachers. Moreover, the surviving 19-year-old suspect himself told interrogators, according to US officials, that he and his brother were inspired by al-Qaeda propaganda and plotted the bombing to defend Islam. 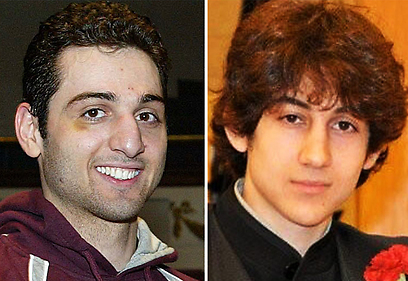 There is no chance for any true peace for the US and Israel for many years to come since several generations of young Arabs and Muslims have already been lost through daily brainwashing to the dark side of civilization, and nothing Israel or the US can do can bring them back. Islamic terrorism is the reflection of a radical ideology in which the central theme of their brainwashing is irrational and obsessive hatred to those who don't embrace Islam.

Otherwise how do you explain the fact that the 19-year-old terrorist, who is described by the media as a normal, nice, friendly kid, placed a bag containing a bomb at the heavily crowded finish line of the 26 mile run. A photo shows that he placed the bomb next to several kids and young females and then walked away knowing that those innocents would likely be killed and maimed. In addition, he and his brother made sure that the bomb was packed with sharp nails and ball bearings designed to amplify the damage and ensure that many limbs would be cut. After the bombings and the report that three had died, including an 8-year-old boy, and more than 260 were injured, he went back the next day to the gym and to attend classes at his the university as if he had done nothing. Two days later, after it was reported that so many people’s legs were amputated, he went to a party at the university dorm as if nothing happened. To the radical Islamists, non-Muslim believers, especially children and women, are not perceived as human beings, but rather as rodents - as portrayed in the Nazi propaganda films when referring to Jews. Similarly, thousands of sermons in mosques, television shows, as well as teachings in school text books emanating from the Muslim, Arab and Palestinian world liken non- believers - including Christians, Jews, Americans, and Israelis - to animals, diseases, and the devil. They glorify martyrdom and death by naming streets, summer camps and soccer teams after suicide bombers.

How much more bloodshed is necessary for Obama and the liberals to understand that even if Israel gave away all the so called “occupied territories”, established a Palestinian state and divided Jerusalem, there would still not be peace but a jumpstart and invitation to another war and more terror? That even if the US would remove every soldier from Afghanistan, Iraq and the entire Middle East and would stop supporting Israel there would still be terrorism in the US committed by brainwashed Jihadists.

Until President Obama and the West change their world view and face this harsh truth, Israel and the US will not be safe from the carnage just experienced in Boston. Shoula Romano Horing is an Israeli born and raised attorney in Kansas City. Her blog: www.shoularomanohoring.com