During visit to Shanghai neighborhood where European Jews found refuge from Nazis, PM says 'today the Jewish nation has a state and army of its own, and no longer needs to plead to be rescued'

Prime Minister Benjamin Netanyahu visited a Shanghai neighborhood where European Jews found refuge during World War II, saying Israel's strong military would ensure they would never again have to seek such protection from others.

The prime minister hasn't directly commented on the raids during his China trip, which is largely focused on strengthening economic ties. On Tuesday, Netanyahu and his wife toured Shanghai's Ohel Moshe synagogue in the Hongkou district that was home to many of the 18,000 Jews granted refuge in Shanghai from the horrors of Nazi persecution.

Hongkou is also home to the Shanghai Jewish Refugees Museum and a considerable amount of prewar housing that has survived destruction during the city's recent rise as a regional financial powerhouse. 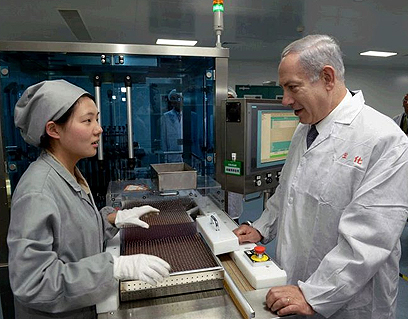 Netanyahu is to arrive in Beijing on Wednesday for talks with Premier Li Keqiang and President Xi Jinping, just one day after the departure of Palestinian President Mahmoud Abbas. China's hosting of the two during the same week emphasizes its desire for a bigger role in the Middle East.

The alleged Israeli attacks on Syria have underscored the difficulty of China's quest to retain a balance in its relations with the regional players. For a second day, Chinese Foreign Ministry spokeswoman Hua Chunying expressed China's opposition to such interventions, without mentioning Israel by name. "We call on all sides of Syria to give top priority to the interest of the Syrian people, launch political dialogue and carry out the political transition as soon as possible," Hua said, in answer to questions at a regularly scheduled news conference. "China also calls on all sides concerned to earnestly respect Syria's sovereignty and territorial integrity, remain restrained and calm, avoid the use of military force and acts that might raise tension, and play a responsible and constructive role in politically resolving the Syrian issue," she said. While in Shanghai, Netanyahu also visited an industrial park and met with Mayor Yang Xiong, with whom he agreed to establish joint research agencies to develop technologies in water use, renewable energy, and public health.