A senior commander in Iran's Revolutionary Guard has warned that his forces will be on watch for possible unrest after next month's presidential election, calling the outcome "unpredictable" and sending the strongest message yet against any attempts to revive street protests, media reported Sunday.

The comments by Col. Rasool Sanaeirad point to a wide-ranging effort by Iranian authorities to intimidate opposition groups that could use the June 14 voting for possible political demonstrations.

Pro-reform groups have been under relentless pressure and crackdowns since major protests following the disputed re-election of President Mahmoud Ahmadinejad in 2009. Ahmadinejad is not running in this election because Iran's constitution bars him from seeking a third term.

But the entry of former President Akbar Hashemi Rafsanjani into the race has re-energized reformists and brought backlash from hard-liners. The Guardian Council, a group controlled by the ruling clerics, vets all candidates and a final ballot list is expected on Tuesday.

Sanaeirad was quoted Sunday as saying the "election is unpredictable," but did not elaborate.

He also warned that a "possible riot in Tehran could spread" to other regions, claiming chances for turmoil are heightened because Iran is for the first time holding both presidential and municipal balloting at the same time. 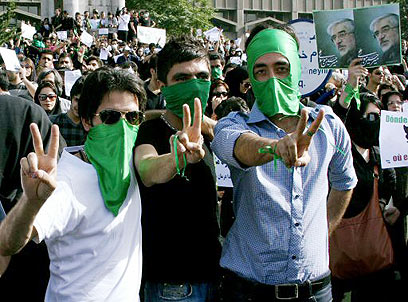 The remarks further suggest that more security controls could be imposed before the election, such as restrictions on the Internet, which was used as the critical tool by the opposition Green Movement in 2009.

Sanaeirad's comments were published in several papers, including the pro-reform Bahar daily.

Despite frequent denials by officials that Internet service will be reduced during the elections, many Web users have complained that services have become very slow and many websites have been blocked, including the pro-Rafsanjani Aftabnews.ir and Meyarnews.com, a site backing another hopeful contender, Ahmadinejad's close aide, Esfandiar Rahim Mashaei.

On Friday, a member of the influential parliamentary committee of national security and foreign policy, Mohammad Saleh Jokar, said the government will block "enemies" using the Internet to "instigate people as we witnessed in 2009."

The pro-reform Aftab daily mocked the snail's pace of the Internet, calling it "escargot" and suggesting authorities would be better off to fully halt the net.

Iranians use proxy servers and other methods to bypass censors and access many popular websites, including Facebook and Twitter, and news sites such as BBC and Voice of America.

A major question is whether the Guardian Council will clear Ahmadinejad's choice, Mashaei. His chances are severely hampered by his association with the president, who has fallen out of favor with the ruling theocracy over his challenges to the authority of Supreme Leader Ayatollah Ali Khamenei.

On Friday, Council chief Ayatollah Ahmad Jannati said the body may disqualify candidates who seek full relations with the United States. Jannati mocked nominees who hope the international sanctions over Tehran's disputed nuclear program will end if the country restores relations with the US.

No high-profile candidate has proposed full restoration - Tehran and Washington have had no diplomatic ties since 1979 - but Rafsanjani has suggested that better relations are possible.