Love thy gay as thyself

Op-ed: Despite significant progress, many in Israel still believe murder of 'diseased' gays 'not so terrible'

Hundreds of thousands of Israelis marched on Friday during the annual Gay Pride Parade – 20 years after the first historic parade took place, and four years after the horrific shooting attack at the Barnoar gay youth center in Tel Aviv. A day of celebration mixed with great sadness.

If timing is everything, then the arrest of the suspects in the deadly shooting just ahead of Gay Pride Week was chilling. It would be difficult to tell the entire story behind the shooting – including the motive and the police's insistence not to define the attack as a "hate crime" – without violating the gag order. But it would be even more difficult not to link the arrests to the gay pride events; to the inconceivable gap between a liberal city painted with the colors of the rainbow flag and an insane man who decides to murder innocent people at a youth center only because of their sexual orientation.
Controversial Photo
Keep gay pride out of IDF
Hagai Segal
Op-ed: IDF Spokesman’s Office erred in publicizing photo of Israeli soldiers holding hands
Keep gay pride out of IDF
Anyone who tries to tell you this wasn't a hate crime needs to take a crash course in reading comprehension: Every murder is a hate crime, and even more so when the murderer targets people because of their sexual orientation. Thanks to a host of very important people, over the past few years the Israeli gay community has made a significant leap on its path toward the enlightened world; from the fringes to the center of the consensus. This is a party that everyone – well, almost everyone – wants to participate in. 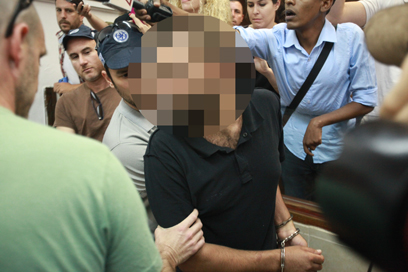 And yet, in the days after the gay revolution, hatred still seethes: Incitement, homophobia, and a general atmosphere of delegitimization created by people – let's call them talkbackers – who believe that killing a gay person is "not so terrible" and that homosexuality "is a disease and gays should die."

These people, who spew their hatred anonymously, increase the possibility that a crazed person will take a firearm and shoot at innocent people. Police officials speak of "an act of personal revenge." What does this mean? Taking revenge on an entire community? On people whose only "crime" is their sexual orientation? The murderer was not confused. He knew exactly where he was. When he entered the gay youth center, he did not aim his firearm at one person; he aimed it at an entire community. Despite all of this, it is hard to walk the streets of Tel Aviv these days without feeling a sense of pride. The rainbow flags are flying high, and thousands of gay tourists can be seen smiling at every corner. The parties, music, love and sex give us the temporary feeling that we live in a country where there is no polarization, oppression, wars, economic woes and expulsion; a country of regular people, of all shapes and colors, who simply want to celebrate the fact that they are here, alive and loving. Who knows, maybe some of this utopian mood will seep into our lives after gay pride week.