There are those who viewed Hassan Rohani as the candidate of the reformists and interpreted his victory in the Iranian presidential election as an indication that the reformists are back on top in the Islamic Republic. But a more in-depth analysis of the situation paints an entirely different picture: It would be a grave mistake to describe Rohani as a reformist.

Rohani is Supreme Leader Khamenei's confidante. He headed Iran's Atomic Energy Organization and served as chief negotiator during nuclear negotiations with the West. Khamenei would not allow a rival to run in the election, and indeed, all the candidates who were thought to be his rivals were disqualified from the race.
Nuclear Program
Beware of Rohani's trap
Ron Ben-Yishai
Analysis: Israel must make certain Obama, Ashton are not dazzled by seemingly moderate Iranian president-elect
Beware of Rohani's trap

Rohani won due to three main reasons: The first – he was considered the most liberal and less rigid of the candidates who were authorized to run; the second reason is that he ran as the candidate of both the reformist camp (headed by Khatami) and the pragmatic camp (headed by Rafsanjani); and finally, he won because the conservative camp had four different candidates in the election race. 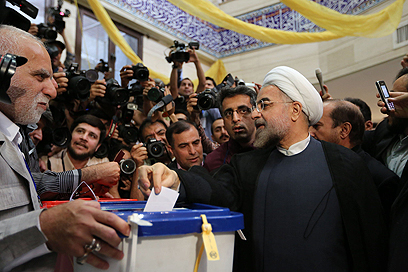 I believe the answer to this question lies in the regime's situation. Domestically, the riots of 2009 posed the greatest challenge for the regime since the Iran-Iraq War, and the regime did not want to risk another internal crisis, which may have erupted had another conservative candidate been elected, particularly after the disastrous eight years of Mahmoud Ahmadinejad. Only a moderate candidate can partially neutralize the explosive situation in Iran by giving the average citizen hope for even the slightest change. Iran has also been hit hard by sanctions and isolated from the international community. The election of a relatively moderate candidate may cause the Western nations to ease the sanctions in order to "give the moderate elements within the Iranian regime a chance." This has happened in the past when Khatami was president, and it may happen again.