The reason for the deadlock in compensation talks between Turkey and Israel is the Jewish state's insistence on defining the damages slated to be paid to the families of those killed during the 2010 commando raid on the Gaza-bound Mavi Marmara ship as an ex gratia payment and not as a result of a "wrongful act," Deputy Turkish Prime Minister Bulent Arinc said.

“In our first meeting (the Israelis) showed no opposition to this. But in the second meeting, they intended to give an ex gratia payment as a form of reparation because they fear compensation (as a result of their wrongful act) will set an example for other cases, which is not a concern to us,” Arinc told bureau chiefs in Ankara on July 23.

Arinc is leading a Turkish team of diplomats and legal experts negotiating the compensation issue with the Israeli government. His comments were published by Turkish newspaper Hurriyet on Wednesday.

On March 22 Prime Minister Benjamin Netanyahu formally apologized to his Turkish counterpart Recep Tayyip Erdogan over the killing of nine Turkish citizens on board the Mavi Marmara vessel, which was carrying pro-Palestinian activists trying to breach Israel's naval blockade of the Hamas-ruled Gaza Strip. Netanyahu also agreed to compensate the families of those killed in the raid. 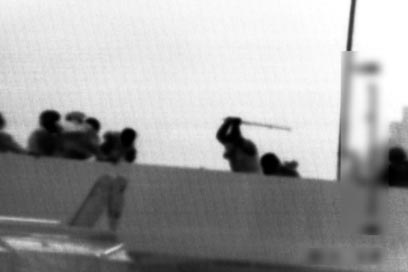 However, compensation talks were suspended after the parties held three meetings in April and in May, with unconfirmed reports that the primary reason was the disagreement over the amount of money.

“The amount of money is not the problem,” Arinc was quoted as saying by Hurriyet. “There are two problematic areas. The first one is that Israel should accept that it’s paying this money as a result of its wrongful act. Nothing less than this will be accepted. And second, we are waiting for them to realize our third condition of cooperating with Turkey in making life conditions easier for Palestinians. We are not talking about the amount of money as our first two conditions have not been met. “We are not going to rush for the money. Israel has to accept its wrongful act. Otherwise we will not say ‘yes’ to them,” he added.

Hurriyet said if an agreement is reached between Turkey and Israel, it will be brought to parliament as an international agreement and will have an effect on ongoing cases against the Israel by the victims’ families. “There cannot be two separate legal attempts to seek compensation. If the governments agree, it will cover (the victims’) demand for compensation as well,” Arinc said.