"Hezbollah's involvement in the war in Syria has not disrupted its preparedness for a war with Israel – the opposite is true," the chief artillery officer of the IDF's Northern Command said Wednesday.

Speaking to Ynet, Colonel Yaron Formosa said Hezbollah gunmen have become proficient in the use of advanced weapons due to the fighting in Syria. "They are continuing to prepare for a war against us, and an isolated incident on the border can lead to deterioration. We are prepared to go to war even tomorrow morning," said the officer.

Meanwhile, the IDF is continuing to investigate the explosion early Wednesday near an IDF force, which was reportedly operating some 400 meters (1,300 feet) within Lebanese territory, near Rosh Hanikra. Four IDF soldiers sustained light to moderate wounds in the blast. 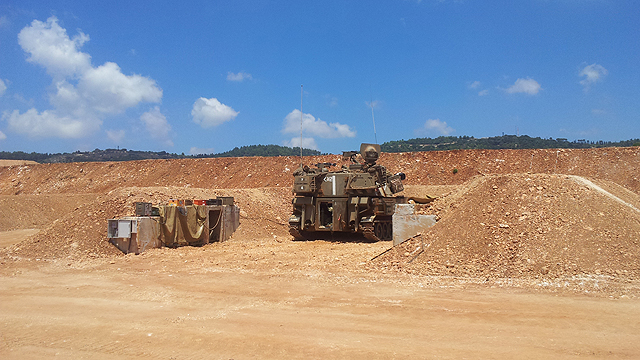 Colonel Formosa stressed that despite Hezbollah's heavy losses in Syria, the Shiite group's lookouts are constantly monitoring IDF activity along the border. "We saw them marking the positions of our artillery guns so they can target them in a war. As a counter measure we are building embankments to protect the weapons and ammunition."

The chief artillery officer said most of the rocket-launching pads the IDF would attack in case a war breaks out have been moved from open areas to villages. "It is difficult to operate in an urban setting. For many Lebanese it will be intolerable. Hezbollah may purposely prevent the civilians from fleeing to the north," he said. "But Hezbollah has tens of thousands of rockets that are aimed at Israel, and we will not be able to operate against them only with artillery fire or the air force. We will need a ground maneuver as well."

Colonel (res.) Yaakov Zigdon, who served as chief artillery officer during Operation Accountability, said "Hezbollah will determine when the next war erupts. We fired 23,100 shells a week during Operation Accountability. They made the difference and gave the north two years of calm. We decided to damage villages after the residents left for Beirut due to our warnings, and they returned to destroyed homes. "Israeli civilians from the north to the center may be 'held hostage,' and no government will agree to this," he added. "Every war is measured by the period of calm it provides until the next war breaks out."