Islamist movement's 'general guide' Mohamed Badie, who was charged in July with inciting the murder of protesters, detained at residential apartment in Cairo

Mohamed Badie, 70, was detained at a residential apartment in Nasr City in northeast Cairo "after information came to the security apparatus locating his place of hiding," the state news agency reported.

The Interior Ministry's Facebook page showed a picture of Badie, with dark rings under his eyes, sitting in a car between two men in black body armor, with a caption confirming his arrest.

"Carrying out the decisions of the public prosecutor to arrest and bring forward the 'general guide' of the Muslim Brotherhood, Mohamed Badie, and through collected information and observation of movements, it was possible for the criminal search apparatus under the direction of Cairo's security (services) to arrest him," according to the caption. Badie was charged in July with inciting the murder of protesters. Together with his two deputies, he is due to stand trial on Aug. 25.

The military removed Morsi from power on July 3 after mass protests against his rule. Morsi, who was freely elected but alienated many Egyptians during his year in power, is in detention at an undisclosed location. Egypt's public prosecutor pressed new charges against Morsi of inciting violence in a move coinciding with a court ruling on Monday that toppled military strongman Hosni Mubarak - arrested after his overthrow in 2011 - can no longer be held on a corruption charge. Morsi was already facing an investigation into accusations stemming from his escape from prison during the anti-Mubarak revolt. These include murder and conspiring with the Palestinian Islamist group Hamas. Almost 900 people, including more than 100 soldiers and police, have been killed since the authorities forcibly dispersed Muslim Brotherhood sit-ins in Cairo last Wednesday. UN Secretary-General Ban Ki-moon on Monday called on Egyptian authorities to free Morsi, who faced mass street protests as he marked a first year in office on June 30, or at least ensure a transparent process. 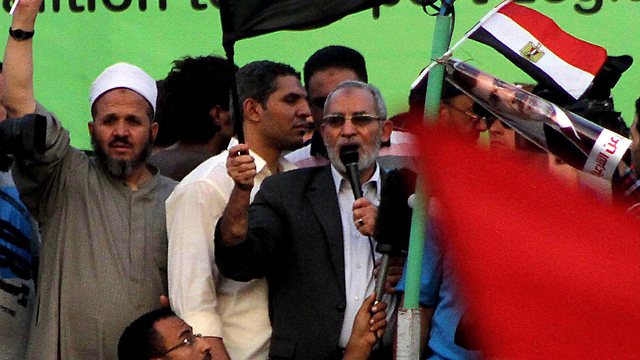 "With such sharp polarization in Egyptian society, both the authorities and the political leaders share the responsibility for ending the current violence. They should spare no effort to swiftly adopt a credible plan to contain the violence and revive the political process," Ban told a UN news conference. The United States also urged Egypt not to ban the Muslim Brotherhood. Founded in 1928, the Muslim Brotherhood used its organizational muscle to propel Morsi to power in last year's presidential election. The group says it has a membership of around one million people in Egypt. The group has inspired offshoots across the Arab world. The Muslim Brotherhood emerged from decades as an outlawed movement to become the best organized political force after the downfall of Mubarak. Members of the Brotherhood - which renounced violence decades ago - are accused by the state of launching a campaign of militancy. The 85-year-old Mubarak, arrested after his overthrow in 2011, can no longer be held on a corruption charge, a court ruled on Monday in a decision his lawyer said removed one of the last obstacles to his release on bail. Fareed el-Deeb, Mubarak's lawyer, told Reuters: "All we have left is a simple administrative procedure that should take no more than 48 hours. He should be freed by the end of the week." A judicial source, without confirming that Mubarak would be released, said Mubarak would spend at least two more weeks behind bars before the criminal court can make a final decision in another corruption case against him. The killing of 25 Egyptian policemen in the Sinai near the desert border with Israel on Monday was blamed by the new, military-installed government on Islamist terrorists. State television carried emotional demands for retribution against the Muslim Brotherhood. The policemen were on their way to their barracks in Rafah when terrorists attacked them with machine-guns and rocket-propelled grenades, according to security sources. Egyptian state television reported that the presidency announced three days of mourning for the "martyrs of Rafah." The United States said on Monday it was still reviewing whether to freeze any of the $1.55 billion it gives Egypt in mainly military annual aid. The United States has been a close ally of Egypt, the biggest nation in the Arab world, since it made peace with Israel in 1979. The United States also voiced concern about the deaths on Sunday of 37 men who authorities said were suffocated by tear gas during a bid to flee custody. "We are ... deeply troubled by the suspicious deaths of Muslim Brotherhood prisoners in a purported prison escape attempt near Cairo," State Department spokeswoman Jen Psaki told reporters in Washington. Having initially defended police action, Egypt later said that two officers had been arrested over the incident. Egypt's second largest Islamic party, Nour, called in a statement for a presidential decree to create an independent fact-finding committee into the deaths of the 37 men and blamed the interior ministry for the incident. European Union foreign ministers will hold an emergency meeting in Brussels on Wednesday to discuss how to force Egypt's army-backed government into seeking a peaceful compromise.