Hagel: US discusses 'facts' on Syria with allies

Secretary of defense says US will continue to consult with Britain on possible strike in Syria despite parliament vote; says Obama seeks international collaboration

US Defense Secretary Chuck Hagel said Friday the Obama administration was consulting with allies to "further develop the facts" about last week's alleged chemical weapons attack in Syria, and options for a response.

Speaking at a news conference in Manila, Hagel said the administration also would continue to seek input from members of Congress on how the US should respond to the deadly attack.

Hagel said Thursday's consultation by high-level Obama administration officials with congressional leaders was "not to convince anyone of anything." He said it was intended as an update and a chance to solicit lawmakers' views on possible US military or other action.

"As we continue to consult with our allies, we'll further develop the facts and intelligence on what happened," he said.

President Barack Obama on Thursday prepared for the possibility of launching unilateral American military action against Syria within days. Asked what Syrian President Bashar Assad could do now to avoid a US strike, Hagel said, "I have not been informed of any change in the Assad regime's position on any issue."

As for the British Parliament's vote against British military action in Syria, Hagel said London has strongly and publicly condemned Syria's alleged gas attacks against civilians.

"That vote in the parliament doesn't change that," he said.

"Every nation has a responsibility to make their own decisions, and we respect that of any nation. ... We'll continue to work with Britain and consult with Britain as we are with all our allies. As to international effort and collaboration, it is the goal of President Obama and our government that whatever decision is taken that it be an international collaboration and effort."

He said the US was going to keep talking to Britain and other nations on "ways forward together."

Hagel was flying back to Washington later Friday.

British Defense Secretary Philip Hammond said on Thursday that Britain would not take part in any military action against Syria after the government unexpectedly lost a vital parliamentary vote on the issue.

"I hoped we would carry the argument but we understand there is a deep well of suspicion about involvement in the Middle East," Hammond told BBC TV's Newsnight programme.

The United States, a key ally, would be disappointed that Britain "will not be involved," he added, but said: "I don't expect that the lack of British participation will stop any action." 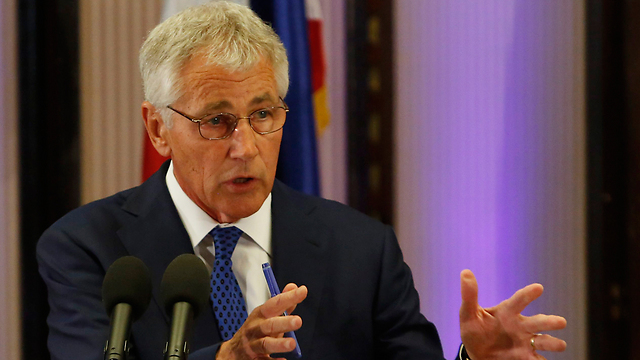 US President Barack Obama is willing to move ahead with a limited military strike on Syria even while allies such as Britain are debating whether to join the effort and without an endorsement from the United Nations Security Council, The New York Times quoted senior administration officials as saying Thursday.

Although the officials cautioned that Obama had not made a final decision, all indications suggest that the strike could occur as soon as UN inspectors, who are investigating the Aug. 21 chemical attack that killed hundreds of Syrians near Damascus, leave the country. They are scheduled to depart Syrian capital on Saturday.

Meanwhile it was reported that chemical weapons attack in Syria last may have been ordered by the brother to Syrian President Bashar Assad, according to a new report from Bloomberg.

The use of chemical weapons may have been a brash action by Maher Assad rather than a strategic decision by the president, according to the UN official, who asked not to be named.

Also Thursday, the Daily Beast reported that the Obama administration refused to send gas masks and other chemical-weapons protection gear to Syrian opposition groups, despite numerous requests dating back more than a year and until the reported chemical-weapons attack that struck the Damascus suburbs August 21.

Obama administration officials told lawmakers on Thursday that they have "no doubt" chemical weapons were used in Syria and that Assad's government had used them, US Representative Eliot Engel, who participated in the call, told Reuters.

The senior administration officials cited evidence including "intercepted communications from high-level Syrian officials" on a conference call with lawmakers, said Engel, the top Democrat on the House of Representatives Foreign Affairs Committee.

They also cited evidence including seeing personnel being moved around Damascus that indicated "it was ready for something big like a chemical attack," he said.

AP and Ynet contributed to this report