Putin: Nobel laureate Obama must hold off on striking Syria

Russan leader says convinced chemical attack near Damascus was 'provocation by those who want to drag other countries into Syrian conflict.' Rebels plan to exploit US-led strikes to launch own attacks

Russia's President Vladimir Putin said on Saturday that it would be "utter nonsense" for the Syrian government to use chemical weapons when it was winning the war, and urged US President Barack Obama not to attack Syrian forces.

The United States said on Friday it was planning a limited military response to punish Syria's President Bashar Assad for a "brutal and flagrant" chemical weapons attack that it says killed more than 1,400 people in Damascus 10 days ago.

"That is why I am convinced that it (the chemical attack) is nothing more than a provocation by those who want to drag other countries into the Syrian conflict, and who want to win the support of powerful members of the international arena, especially the United States," Putin told journalists.

The Russian leader also said that Obama, a Nobel Peace Prize laureate, should consider the potential victims of a military attack against Syria. He urged Washington to present evidence of chemical use in Syria to the UN Security Council.

The United States said on Friday it was planning a limited response to punish Assad for a "brutal and flagrant" chemical weapons attack it says killed more than 1,400 people in Damascus 10 days ago. Washington has five cruise-missile equipped destroyers in the region. The Syrian government denies using chemical arms.

Qassim Saadeddine, a former Syrian army colonel and spokesman for the rebels' Supreme Military Council, said the council had sent a selection of rebel groups a military plan of action to use if strikes took place.

"The hope is to take advantage when some areas are weakened by any strikes. We ordered some groups to prepare in each province, to ready their fighters for when the strike happens," he told Reuters, speaking by Skype. "They were sent a military plan that includes preparations to attack some of the targets we expect to be hit in foreign strikes, and some others that we hope to attack at the same time." The Supreme Military Council is the armed wing linked to the National Coalition, an umbrella group considered to be the opposition's political leadership abroad. 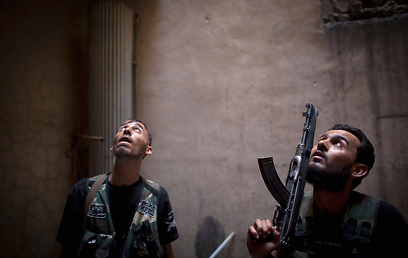 Saadeddine said the plans had been prepared without any help from foreign powers. He said no information had been offered to them by the United States or any other Western countries such as France, which has supported carrying out a strike on Assad.

"The United States considers us to be one of the two parties engaged in a civil war, they haven't spoken to the rebel leadership at large, though they have communicated to the political leaders in the Coalition," Saadeddine said. "There may have been consultations with the head of our council, Salim Idriss, but I cannot confirm this." Syria's two-and-a-half year old conflict began as a peaceful protest against four decades of Assad family rule but has become a civil war that has killed more than 100,000 people. Activists said rockets loaded with poison-gas killed hundreds of people in rebel-held areas outside Damascus, many of them children, on Aug.21. The Syrian government blames rebels fighting to topple Assad for the attack, but Washington says its intelligence shows Assad's forces were responsible. Saadeddine said his forces assessed that a Western attack would happen in the coming days and would last about three days. Saadeddine said the rebels liaising with the council had drawn up a list of potential targets for any strike. "We think it will be something among military sites such as the headquarters of military leadership, military airports, certain weapon storage areas, or launchpads and installations for large missiles such as Scuds," he said. Other sites seen by rebels as likely targets, Saadeddine said, were those belonging to elite forces believed most loyal to Assad - the Fourth Armored Division and the Republican Guard. The opposition blames those units for playing a role in the poison gas attack. Other rebels contacted, without links to the council, said they were also trying to prepare for a potential strike, but that they were struggling to come up with a plan of action.