Op-ed: How many Syrians have to die before President Obama acquires the necessary conviction to lead?

On August 20, 2012 President Obama warned against chemical weapons’ use in Syria, declaring it a "red line." On Dec. 3, 2012, Obama repeated his warning to Assad, saying “The use of chemical weapons is...totally unacceptable. And if you make the tragic mistake of using these weapons, there will be consequences and you will be held accountable.”

Last April, Britain, France and Israel concluded that chemical weapons had been used in Syria. On June 13, the Obama administration finally concluded that the Syrian government used chemical weapons against civilians.
Syria Crisis
European disgrace
Shimon Shiffer
Op-ed: After shirking its duty to prevent use of WMDs, Europe has lost its right to lecture anyone – especially Israel
European disgrace
But nothing happened after that -- except a conclusion by the Syrian regime that it can continue to use such weapons with impunity. Indeed, United Nations Middle East envoy Robert Serry claimed in July that the United Nations had received 13 reports of alleged chemical weapons use in Syria. On August 21, Assad gassed to death 1,429 civilians. What principle was violated upon the 14th use of chemical weapons but not on the first 13 uses? Obama's reactions to violations of his "red line" have been spineless and incoherent: Apparently chemical weapons use is fine if fewer than 1,429 civilians are killed. But if the death count is dispositive, those totals are met every week with Assad's use of conventional weapons. And if chemical weapons use matters because it violates some international moral norm, as Obama recently argued, then his response comes 13 violations (and the related deaths) too late. Obama now wants Congressional approval for the enforcement of his "red line." Such backtracking resembles his attempt last April to condition any US response on a thorough investigation that confirmed Syria's chemical weapons attack to the satisfaction of the international community (in yet another reversal Obama later said that the US was justified in acting unilaterally). If Assad's 14th chemical weapons attack had killed 30,000 people, would Obama still need Congressional approval for military action? How many Syrians have to die before Obama acquires the necessary conviction to lead? Moral leadership aside, there's a reason that the US president is the commander-in-chief: The exigencies of war require executive decisiveness and surprise -- neither of which an open and deliberative body like the US Congress can provide. 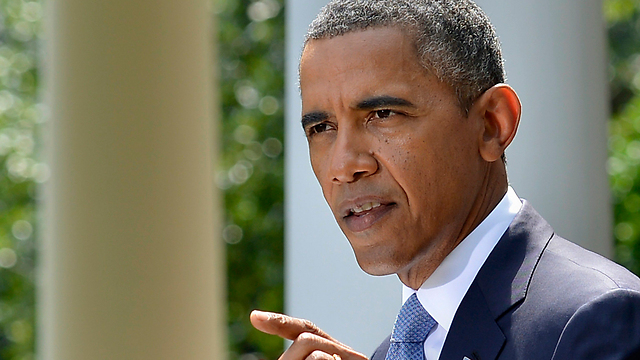 Obama's latest about-face is problematic in at least five ways:

1) It gives Assad more time to move all of his military assets into protected locations, rendering any eventual US strike less effective. 2) Given Obama's stated goal (deterring further violations of an "international norm"), what is to stop Assad from launching more chemical attacks during the window of time that Obama just created until Congress votes on the issue (a few weeks from now)? 3) What signal does Obama's dithering send to the Syrians wondering how much more wholesale slaughter the US will countenance when the mere "prospect of violence on a horrific scale" was enough to prompt US military action in Libya? What signal does Obama's hesitation on Syria send to a far stronger Iran that has been threatening to destroy Israel while developing the nuclear means to do so? And what is Israel to make of Obama's assurances that it will prevent Iran from acquiring nukes? 4) What happens if Congress, like the British Parliament, votes against any military action against Syria? Obama would then be left with an even worse set of choices: flout the will of the very institution he purported to respect and attack Syria anyway (in what might then be a constitutionally questionable move), or renege on his declared intent to punish the violation of a universal norm. Such an embarrassing reversal would undermine whatever little is left of Obama's credibility and US power/influence, and it would implicitly authorize governments around the world to use chemical weapons as they please. South Korean officials rightly expressed concern about the lesson that North Korea would glean from a US failure to punish to Syria's chemical attacks, as did Turkish, Israeli and Saudi officials regarding the Iranian nuclear threat. 5) Meanwhile, Syria's neighbors -- particularly Israel and Turkey -- must now remain for weeks in a state of jittery limbo regarding a potential Syrian retaliation against them, as they wait to see if Congress votes to attack Syria. Worse still, Obama's symbolic "punitive strike," if it even happens, will change nothing on the ground. Assad will emerge unscathed, declare that even the mighty US can't stop him, and continue massacring his citizens, perhaps even with chemical weapons again, knowing how tepid the US response will be. At best, Obama is trying with reluctant half-measures to confront adversaries -- Syria, Russia, Iran, and Hezbollah -- fully committed to victory. Such tentative actions achieve nothing and jeopardize US interests by drawing the US and its allies into a dangerous conflict on the enemy's terms. Elizabeth O'Bagy, a senior analyst at the Institute for the Study of War who has repeatedly traveled to Syria to investigate the facts on the ground, has concluded that there is still a moderate rebel force that shares some US interests and is worthy of US support. A sounder US strategy would both give these rebels the support they need and deliver a decisive military blow that achieves three objectives: 1) Destroy Assad's arsenal of chemical weapons so that they no longer threaten anyone in or out of Syria, 2) Restore US deterrence by establishing that US "red lines" actually mean something when it comes to the use (or development) of WMD, and 3) Threaten the Assad regime in a way that encourages it to redeploy its remaining resources away from reconquering territory and towards establishing a defensible Alawite state in the northwest provinces of Tartous and Latakia (where Alawites predominate). A policy committed to the above three objectives will also make it far easier for the US to resolve the Iranian nuclear standoff peacefully. The only time that the Iranian regime suspended its enrichment activities was briefly after the 2003 US invasion of Iraq, when Iran feared that it would be attacked next. There is very little time left to convince Iran that US-drawn red lines actually mean something; Iran may soon be able to rush across the nuclear finish line undetected, after installing over 1,000 IR-2M centrifuges at its Natanz Fuel Enrichment Plant. Syria will inevitably balkanize, with the Alawites in the northwest, Kurds in the northeast, Sunnis from east of the Alawites to the Iraqi border, and Druze and Sunnis in the southwest. This is the most "stable" outcome, if only because there has been so much sectarian bloodshed that peaceful coexistence under any one regime is at this point unthinkable, and the belligerents are far more likely to lay down their arms if each enjoys the security of its own mini-state that can protect its respective interests and negotiate a long-term peace with mediation by outside powers. But the longer Obama remains spineless on Syria, the longer the bloodbath will continue, with increasingly unpredictable and catastrophic consequences (that could still compel US involvement), and the more the US will telegraph timidity to dangerous regimes deterred only by strength.

Noah Beck is the author of The Last Israelis, an apocalyptic novel about Iranian nukes and other geopolitical issues in the Middle East.