Secret document provided to the Guardian by Snowden indicates US government handed over to Israel intercepted communications likely to contain phone calls and emails of American citizens; also suggests Jewish state 'third most aggressive intelligence service against US'

The National Security Agency routinely shares raw intelligence data with Israel without first sifting it to remove information about US citizens, a top-secret document provided to the Guardian by whistleblower Edward Snowden reveals.

The British newspaper said details of the intelligence-sharing agreement are laid out in a memorandum of understanding between the NSA and its Israeli counterpart that shows the US government handed over intercepted communications likely to contain phone calls and emails of American citizens. The agreement places no legally binding limits on the use of the data by the Israelis.

According to the report, the disclosure that the NSA agreed to provide raw intelligence data to a foreign country contrasts with assurances from the Obama administration that there are rigorous safeguards to protect the privacy of US citizens caught in the dragnet. The intelligence community calls this process "minimization", but the memorandum makes clear that the information shared with the Israelis would be in its pre-minimized state. 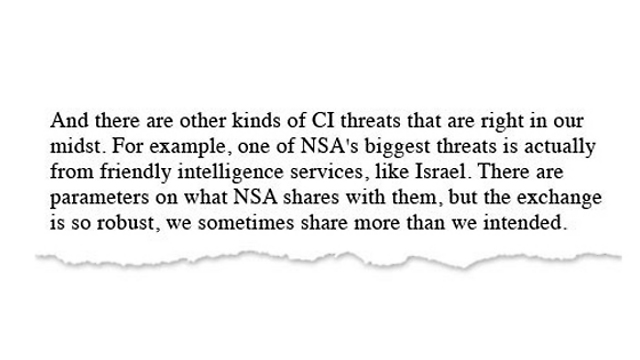 But this is undermined by the disclosure that Israel is allowed to receive "raw Sigint" – signal intelligence. The memorandum says: "Raw Sigint includes, but is not limited to, unevaluated and unminimized transcripts, gists, facsimiles, telex, voice and Digital Network Intelligence metadata and content."

According to the agreement, the intelligence being shared would not be filtered in advance by NSA analysts to remove US communications. "NSA routinely sends ISNU (the Israeli Sigint National Unit - aka 8200) minimized and unminimized raw collection", it says. 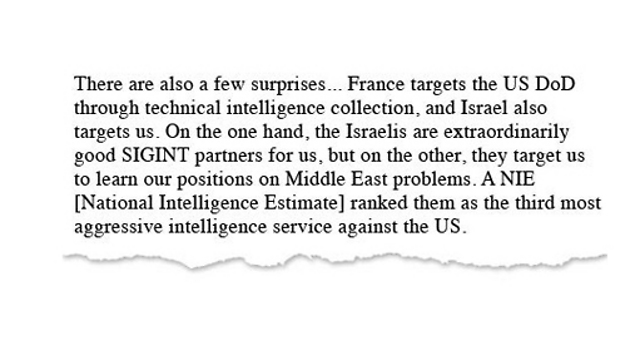 The Guardian stressed that although the memorandum is explicit in saying the material had to be handled in accordance with US law, and that the Israelis agreed not to deliberately target Americans identified in the data, these rules are not backed up by legal obligations.

"This agreement is not intended to create any legally enforceable rights and shall not be construed to be either an international agreement or a legally binding instrument according to international law," the document says. In a statement to the Guardian, an NSA spokesperson did not deny that personal data about Americans was included in raw intelligence data shared with the Israelis. But the agency insisted that the shared intelligence complied with all rules governing privacy. "Any US person information that is acquired as a result of NSA's surveillance activities is handled under procedures that are designed to protect privacy rights," the spokesperson told the British newspaper.

The memorandum of understanding, which the Guardian is publishing in full, allows Israel to retain "any files containing the identities of US persons" for up to a year. The agreement requests only that the Israelis should consult the NSA's special liaison adviser when such data is found.

Notably, a much stricter rule was set for US government communications found in the raw intelligence.

The Israelis were required to "destroy upon recognition" any communication "that is either to or from an official of the US government."

Such communications included those of "officials of the executive branch (including the White House, cabinet departments, and independent agencies), the US House of Representatives and Senate (member and staff) and the US federal court system (including, but not limited to, the supreme court)."

The document mentions only one check carried out by the NSA on the raw intelligence, saying the agency will "regularly review a sample of files transferred to ISNU to validate the absence of US persons' identities". It also requests that the Israelis limit access only to personnel with a "strict need to know." Israeli intelligence is allowed "to disseminate foreign intelligence information concerning US persons derived from raw Sigint by NSA" on condition that it does so "in a manner that does not identify the US person."

The agreement also allows Israel to release US person identities to "outside parties, including all INSU customers" with the NSA's written permission.

The Guardian said that although Israel is one of America's closest allies, it is not one of the inner core of countries involved in surveillance sharing with the US - Britain, Australia, Canada and New Zealand. This group is collectively known as Five Eyes. While NSA documents tout the mutually beneficial relationship of Sigint sharing, another report, marked top secret and dated September 2007, states that the relationship, while central to US strategy, has become overwhelmingly one-sided in favor of Israel. "Balancing the Sigint exchange equally between US and Israeli needs has been a constant challenge," states the report, titled 'History of the US – Israel Sigint Relationship, Post-1992'. "In the last decade, it arguably tilted heavily in favor of Israeli security concerns. 9/11 came, and went, with NSA's only true Third Party (counter-terrorism) relationship being driven almost totally by the needs of the partner." In another top-secret document seen by the Guardian, dated 2008, a senior NSA official points out that Israel aggressively spies on the US. "On the one hand, the Israelis are extraordinarily good Sigint partners for us, but on the other, they target us to learn our positions on Middle East problems," the official says. "A NIE (National Intelligence Estimate) ranked them as the third most aggressive intelligence service against the US." Later in the document, the official is quoted as saying: "One of NSA's biggest threats is actually from friendly intelligence services, like Israel. There are parameters on what NSA shares with them, but the exchange is so robust, we sometimes share more than we intended." According to the Guardian's report, the memorandum of understanding also contains hints that there had been tensions in the intelligence-sharing relationship with Israel. At a meeting in March 2009 between the two agencies, according to the document, it was agreed that the sharing of raw data required a new framework and further training for Israeli personnel to protect US person information. It is not clear whether or not this was because there had been problems up to that point in the handling of intelligence that was found to contain Americans' data. However, an earlier US document obtained by Snowden, which discusses co-operating on a military intelligence program, bluntly lists under the cons: "Trust issues which revolve around previous ISR (Israel) operations."