Egyptian army soldiers operating against jihadists in the Sinai Peninsula discovered that the terrorists are using motorized paradliders that can be used to cross any border barrier. Army Spokesperson Ahmed Ali told a press conference on Sunday that three such paragliders have been seized over the past few days. The paragliders are apparently American made.

Ali also played a video showing for the first time hundreds of Islamists who were detained by security forces. The detainees were filmed speaking about their activities and motives. Many of the detainees are Palestinians or jihadists who arrived in Sinai from other countries. According to the video, Egyptian jihadists who are residents of Sinai are in the minority.

Ali declared that the army transformed its operations in the peninsula from reactive regarding the attacks on its forces, to proactive to "purify Sinai from the terrorizing elements" who pose "a threat, not only to national security, but also regional and international security."

Ali said that the army was surprised with the "sudden escalation of terrorist attacks in Sinai after 30 June 2013," which led the army to similarly escalate their own operations by the second half of August. The paragliders are essentially chairs equipped with a gasoline engine. They can remain in the air for up to an hour. An Egyptian security source told the Al-Masry Al-Youm daily that the paragliders were seized in northern Sinai homes where gunmen were holed up. He said they can fly at an altitude of 150-200 meters (492-656 feet). He explained that the jihad organizations are using them to photograph army positions and occasionally open fire from above using automatic rifles or even rocket-propelled grenades. "This equipment is very dangerous. It is the most advanced we have found in their possession," he said. 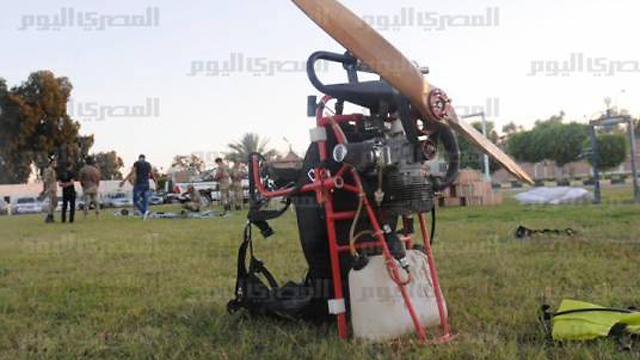 According to Ali, the army has arrested around 309 militants and confiscated a number of munitions, including mortars and rocket-propelled grenades.

He added that some of the confiscated hand grenades bear the stamp of Al-Qassam Brigades – the militant wing of Gaza's Islamist ruling party Hamas. “Hamas is also responsible for securing the borders,” said Ali, who added that houses placed on the border with the Gaza Strip are a threat to national security. Ali stated that while no buffer zone has been declared between Sinai and Gaza yet, the army is securing a distance of between 500 meters and one kilometer at the border. Ali further vowed that once operations are finalized, the army would support an initiative to develop the peninsula. “The last week involved a decisive confrontation with elements that threaten national security,” said Ali. He added that the armed forces present in Sinai are also concerned with protecting the freedom and interests of “the people of Sinai.” "If we had used excessive violence in Sinai, we would have ended terrorism within 24 hours."