Iran says willing to build trust with US on nuclear issue

Iranian Foreign Minister Mohammad Javad Zarif said Sunday in an interview with Lebanese channel Al-Mayadeen, "We are suffering from lack of mutual trust with the US," but stressed that the Islamic Republic was willing to "build trust with the United States" on the issue of the Iranian nuclear program, which was "established for peaceful purposes."

Zarif told the television channel, which is affiliated with Hezbollah, that Iran wants the US to "present a genuine desire for peace and stop using the language of threats."

Addressing the threats of a military strike on Syria, the senior Iranian official said the "call to war is a severe crime that does not serve our friends in the region or the United States." As for the American-Russian plan to disarm President Bashar Assad's regime of its chemical weapons, Zarif said "we've passed the critical stage and we hope that the chances of a military operation against Syria have dissipated."

During the interview, the Iranian FM said he had accepted British Foreign Secretary William Hague request to meet on the sidelines of the UN General Assembly, which will open in New York at the end of the month.

Newly-elected Iranian President Hassan Rohani is expected to address the Assembly on September 24.

President Barack Obama disclosed in a television interview broadcast on Sunday that he had exchanged letters with Rohani and said diplomacy on Syria, backed up by a military threat, is a potential model for negotiations on Tehran's nuclear ambitions. 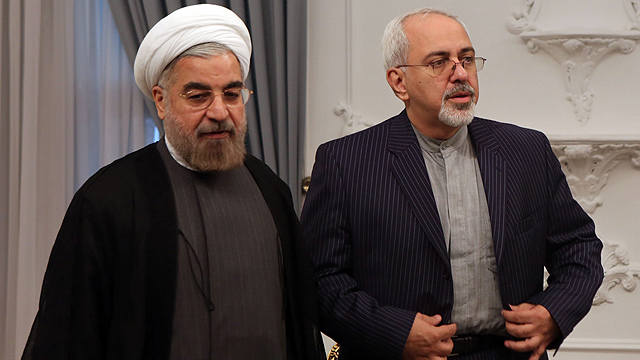 'Lack of mutual trust with US.' Rohani (left) and Zarif (Photo: AFP)

In an interview on ABC's "This Week with George Stephanopoulos," Obama did not reveal details of the letter exchange, but made clear that US concerns about Iran's nuclear ambitions are a "far larger issue for us" than Syria's chemical weapons.

Obama said Iran should avoid thinking that the United States would not launch a military strike in response to Tehran's nuclear program just because it has not attacked Syria.

"They shouldn't draw a lesson that we haven't struck, to think we won't strike Iran," Obama said. "On the other hand, what they should draw from this lesson is that there is the potential of resolving these issues diplomatically." Tehran denies seeking nuclear weapons but the United States and Israel are working under the assumption that Iran is well along toward developing an atomic weapons program.
רשת ABC
X

Regarded as a relative moderate, Rohani has made conciliatory statements toward Washington since coming to office last month. However, Obama said he doubted Rohani would "suddenly make it easy" to negotiate with the Iranians.

"My view is that if you have both a credible threat of force, combined with a rigorous diplomatic effort, that, in fact you can strike a deal," he said. White House spokeswoman Bernadette Meehan said the United States hopes the Iranian government will engage substantively in order to reach a diplomatic solution to the nuclear issue. "We remain ready to engage with the Rohani government on the basis of mutual respect to achieve a peaceful resolution to the nuclear issue," she said. A few days ago the Los Angeles Times reported that the Obama administration and the new leadership in Iran are communicating about Syria and are moving behind the scenes toward direct talks that both governments hope can ease the escalating confrontation over Tehran's nuclear program.

President Obama reportedly reached out to Iran's relatively moderate president through an exchange of letters in recent weeks, the newspaper said.

According to the London-based pan-Arab daily Al-Hayat, Obama told Iran he is eager to "turn a new page" in his government's relations with Iran and even said the US would ease the sanctions on the Islamic Republic.

The report said Obama communicated his message to the Tehran regime through an emissary, the ruler of Oman, Sultan Qaboos bin Said Al Said.

Prime Minister Benjamin Netanyahu welcomed the US-Russia deal on Sunday and stressed his belief that it would have deep repercussions on Iran, Syria's close ally.

He said the deal proved that "if diplomacy has any chance to work, it must be coupled with a credible military threat."

Kerry said the agreement, if successful, "will have set a marker for the standard of behavior with respect to Iran and with respect North Korea and any rogue state, (or) group that tries to reach for these kind of weapons."