Fighting around the country erupts as supporters, opponents of deposed President Morsi take to streets during holiday marking anniversary of war with Israel; at least 51 dead; more than 200 injured

Clashes erupted across much of Egypt between security forces and supporters of the ousted president on Sunday, leaving 51 killed, as rival crowds of supporters of the military and backers of the Islamist Mohamed Morsi poured into streets around the country to mark a major holiday.

State news agency MENA quoted the health ministry as saying that more than 246 people were wounded in the clashes. About 430 of Morsi's supporters were arrested in Cairo when they tried to protest against the army.

Most of the detainees were accused of vandalism. About 25 Muslim Brotherhood men were arrested for possessing home-made explosive devices, and 20 Islamists were arrested in Alexandria for allegedly attacking residents and carrying firearms.

The clashes took place on the day 40 years ago when Egyptian forces crossed the Suez Canal at the start of the nation's last war with Israel. The day has since been declared a national holiday. The military-backed government had wanted the anniversary celebration to be a tribute to the armed forces, whose chief ousted the Islamist Mohammed Morsi in a popularly supported coup on July 3.

But demonstrations across Cairo and much of the country by Morsi's supporters marred the festivities. They and security forces fought pitched street battles for hours in several Cairo locations that now look like combat zones, with small fires burning, black smoke rising and the sound of gunshots piercing the air thick with tear gas.

In some cases, the pro-Morsi demonstrators were set upon by supporters of the military. Authorities said they had arrested 335 Morsi supporters nationwide. 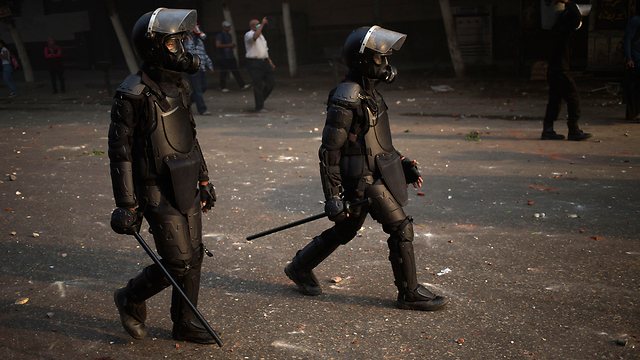 The clashes were the last chapter in the turmoil roiling the country since the ouster in February 2011 of longtime ruler Hosni Mubarak and are certain to set back efforts by the government to revive the economy, especially the vital tourism sector, and bring order to the streets of Cairo, where crime and lawlessness have been rife.

The scene of the fighting contrasted sharply with a carnival-like mood in Cairo's central Tahrir Square, where thousands of supporters of the military waved Egyptian flags, blew whistles and touted posters of army chief Gen. Abdel-Fattah al-Sissi. Adding to the festivities, a military band in green jackets and off white pants played, and men spun in whirling dervish-style dances. 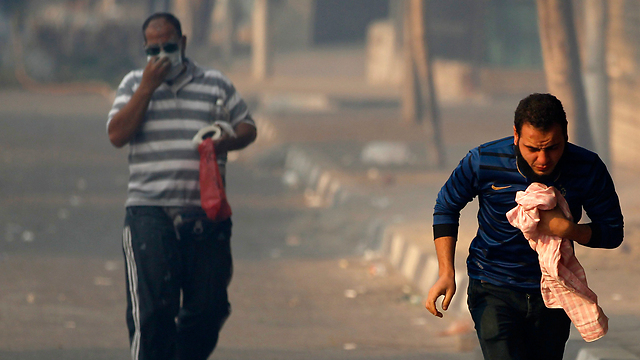 Thousands of Morsi backers meanwhile held marches around the city, shouting slogans against al-Sissi as some headed toward Tahrir in hopes of forcing their way into the sprawling plaza.

At central locations including a southern entrance to the square, police fired into the air and lobbed tear gas to push back several pro-Morsi marches as they approached. Some of the dead however suffered gunshot wounds to the head and chest and the pro-Morsi demonstrators were also lobbing firebombs and firing birdshots at the police.

An Associated Press photographer saw nine bodies lying on the floor of a clinic in the Dokki area, where heavy clashes took place. Most had gunshot wounds to the head and chest.

Soldiers barricaded entrances to Tahrir with barbed wire and armored personnel vehicles. Metal detectors were installed at the entrances and demonstrators pouring into the square were searched by troops.

"The people have one demand: Remove al-Sissi and the president," Islamist protesters chanted, referring to the interim president installed after Morsi's fall.

Violence was also reported in southern Egypt, where one Morsi supporter was killed in the town of Dalga. Police opened fire on a march by Islamists after some of the protesters fired birdshot at the police, according to the provincial security chief, Osama Metwali.