Dieudonné. Half a million followers on social networks
Photo: AP

Annual Anti-Semitism Report released by Israel's Information and Diaspora Ministry reveals that although 2013 did not see a significant increase in the number of violent attacks on Jews and their property, the situation on the ground is much worse

Jewish communities around the world are living with a sense of growing anti-Semitism, although 2013 did not record a significant increase in the number of violent attacks on Jews and their property, according to an annual report released by the Israel's Information and Diaspora Ministry.

The report, which was presented to the cabinet on Sunday by Minister Naftali Bennett, states that "the soul, rather than the body, is the main victim of the new wave of anti-Semitism." According to estimates, the situation on the ground has become much worse.

According to the report, which is mostly based on the database and research of the Kantor Center for the Study of Contemporary European Jewry at Tel Aviv University, the feeling among the world's Jewry stems from the severity of verbal and visual expressions, insults, harassment and threats Jews encounter in their daily life, which create a situation that is becoming more and more difficult.

"The murky atmosphere contributes to a change in European Jews' point of view towards their country and surroundings, and strengthens their personal insecurity," the report says.

Addressing the situation in Europe, the report mentions the results of a survey commissioned by the European Union Agency for Fundamental Rights (FRA) in 2013, according to which 66% of Jews see anti-Semitism as a problem affecting their lives, and 76% believe it has worsened in recent years.

Thirty-eight percent of the respondents said they are afraid of falling victim to an anti-Semitic attack and do not leave the house with "identifying symbols" like a skullcap or Star of David, 23% do not participate in "Jewish" events for fear of being targeted on the way, and 20% are even considering emigrating from their country due to the growing anti-Semitism. According to the same survey, about one-quarter of Jews experienced an incident in the previous year which included a verbal insult, and nearly half of the respondents expressed their concern that they would fall victim to an anti-Semitic incident in the following year. Nonetheless, 77% avoided reporting the incidents, assuming that they would not be taken care of. The Diaspora Ministry report states that "in most cases, it is possible to track the number of violent incidents, like vandalism against public and private property and attacks on individuals, but only if the victims report them." Yet in light of the failure to report the incidents, "it is certain that the monitoring bodies are only aware of a small part of the overall picture."

The level of concern among Jews in Hungary, for example, is very high, and a significant increase is apparent in the Jewish community's sense of fear of anti-Semitic phenomena in the past year – although no real change was recorded in the number of violent incidents. The reasons appear to be the growing nationalistic discourse since the rise to power of the Federation of Young Democrats (Fidesz) in 2010, and the emergence of the extreme Jobbik party, which is a defined as neo-Nazi, as a political force.

Other countries in which recorded high report levels of a rise in anti-Semitism are France, Belgium and Sweden. The situation appears to be relatively less serious in Italy, Germany, Britain and Latvia. The authors of the report, which was presented on the eve of International Holocaust Day, noted that after the survey's publication the FRA removed from its website the definition of anti-Semitism which had been in international use since 2000 and stated that anti-Zionist expressions, hostile attitudes towards the State of Israel's existence, likening it to Nazi Germany and discriminating against it could be considered as anti-Semitism in certain cases.

"No satisfactory explanation has been provided for the definition's removal," the report authors wrote, "apart from the claim that the definition was never officially adopted as a binding document by the European Union."

Another phenomenon mentioned in the report as an expression of anti-Semitism is the "quenelle" gesture, seen as an inverted Nazi salute, which began spreading across Europe in late 2013, as first reported by Ynet.

The researchers believe that attempts to ban Jewish customs like ritual slaughter and circumcision in the continent do not necessary stem from hatred of Jews, but strengthen anti-Semitic messages in any event. 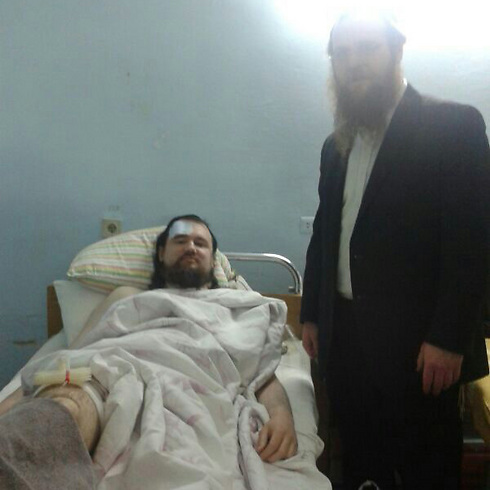 In Russia and Ukraine, expressions of hatred have become an inseparable part of the local Jewish communities' lives. Dov Ber Glickman was stabbed in Kiev about a week ago (Photo: Hatzalah Ukraine)

Seventy percent of the respondents of the FRA survey reported experiencing anti-Semitism online, a phenomenon which has grown in recent years. The Diaspora Ministry report dedicates an extensive chapter to this phenomenon, stating that "it's very difficult to fight the simplicity of posting material on the Internet and the anonymity the person who posts the material hides behind in most cases."

Famous incidents from the past year included a video showing a devout Muslim calling for the murder of all Jews – which was removed only after a sufficient number of complaints; French comedian Dieudonné M'bala M'bala, who invented the "quenelle," gained half a million friends and followers on social networks; and groundless anti-Semitic conspiracy theories reached every house.

In Chile and Argentina, a rumor was started online that the IDF was working to conquer Patagonia in order to establish a Jewish state there, and that Jewish millionaire Eduardo Elsztain had even bought it from the Argentinean president in exchange for cancelling the country's debt to the World Bank.

In Venezuela, Israel was blamed for the death of President Hugo Chavez and accused of attempting to inflame a third world war in which Israel will attack China and Russia.

"In Russia, the Jews are blamed for all of the country's troubles, including the economic situation, and so members of the opposition one hand and Putin's regime on the other hand are accused of selling themselves to Jewish capital," the report says.

Some 100 anti-Semitic websites have been recorded in Italy, in Canada there is an increase in online harassment, and even Web surfers in Kyrgyzstan are blaming the economic and social problems on the Jews. Social networks in Mexico recorded in the beginning of the year a wave of anti-Semitic expressions related to the Holocaust, like "I'm burning like a Jew," which reached the sixth place on the Twitter popularity list. Another tweet combined a children's game with a picture of dead Jews in a concentration camp. "The fact that although there was no military conflict between Israel and the Palestinians, there was still no drop in the amount of anti-Israel statements and actions, once again pulls the rug from under the feet of those who argue that the Jewish-Arab conflict is the reason for the rise in anti-Semitism," Minister Bennett notes in the introduction. The report itself notes that "the anti-Zionism, which is mainly prevalent among the Left and has already become an integral part of the regular worldview of individuals and groups within it, can be defined as a cultural code replacing anti-Semitism and allowing its distributors to deny any connection to anti-Semitism. This denial is defined by researches today as 'anti-Semitism denial' – like Holocaust denial." But there are those who don’t take the trouble to distance themselves from anti-Semitism. In Russia and Ukraine, for instance, where physical and verbal expressions of hatred have become an inseparable part of the local Jewish communities' lives – without the customary discussions in the West about Israel's status and actions.

In the Arab world, the Diaspora Ministry report points to popular anti-Semitic perceptions and accusing Israel and the Jews of conspiratorial involvement in incidents between rival camps in the Arab world, relying on the Protocols of the Elders of Zion, blood libels and images from the Nazi lexicon.

For example, Syrian newspaper al-Thawra, the Assad regime's mouthpiece, claimed that the Zionists were aspiring to take over the world inspired by the Protocols, were inflaming wars and conflicts and were responsible for the civil war in the country. The website of Palestinian news agency Maan published an article "proving" that those fabricated documents were authentic, and the Palestinian Authority's television channel said the Jews were planning to corrupt the Muslims "through women and wine" – a strategy which also originates in the Protocols of the Elders of Zion. In addition, Turkish Prime Minister Recep Tayyip Erdogan accused Israel of being responsible for the ouster of Egyptian President Mohamed Morsi, in Jordanian newspaper al-Arab al-Yawm a writer wondered whether US President Barack Obama knew that the Jews use Christian blood to bake matzot on Passover, and Egyptian newspaper Misr al-Jadida accused Israel of distributing drugs in a bid to harm the Palestinian youth in east Jerusalem.

Yemen's chief rabbi cuts off his side locks

Another example of the "modern" anti-Semitism in the Arab world is the way Adolf Hitler inspires commercials both in Saudi Arabia and in Dubai. A cartoon carried in August by protestors in Egypt and east Jerusalem and spread in social networks, stated that the big difference between Hitler and General al-Sisi was that Hitler killed Jews for his people while al-Sisi was killing his people for the Jews.

The report notes that the past year provided a glimpse into the situation of the few Jews left in Arab countries because of expressions of hatred. In January 2013, pictures of a Jewish cemetery desecrated in Tunisia were spread on social networks. The situation of the Jews of Djerba, about 1,000, is difficult and they live in fear after their main synagogue and school were damaged. The chief rabbi and head of Yemen's Jewish community, Yehie Yosef Salim, spoke in a television interview in his country about the segregation and persecution. He cut off his side locks so as not to be harassed on the streets of Saada. "The Jews serve as victims of the struggle between the forces of the main government and the rebel Shiite Khoti tribe in the northern part of the country, which al-Qaeda activists teamed up with in the 2000s," the report states. Yet the report does praise a "handful of brave liberals (in the Muslim world) which condemn anti-Semitism and even combat it." They take part in interfaith dialogues, in conferences about the Holocaust and its education and in visits to Auschwitz and Yad Vashem. "At first sight, one may find signs of optimism in the annual report, as compared to the previous year there has not been an apparent increase in the amount of anti-Semitic incidents around the world," Minister Bennett concluded. "But the truth is that essentially the situation has only become worse. "Although there were no noticeable incidents this year which created a major global buzz, 2013 was the year in which the anti-Semitic atmosphere swept over the lives of Jews around the world in general and in Europe in particular. We cannot accept this reality."