Dieudonne. 'I am not a Nazi, I am not anti-Semitic'
Photo: AP

Dieudonne says his lawyers will continue to defend banned show in court, he is planning new show with none of language that courts found objectionable

VIDEO – A French comedian said on Saturday he had dropped a show banned for its anti-Semitic language, and was planning one that would cause no objections.

On Friday, France's highest administrative court upheld a ban on a show by the black comedian Dieudonne M'Bala M'Bala in the central city of Tours, days after it was also banned in the western city of Nantes.

Dieudonne said in a statement that his lawyers would continue to defend the banned show in court, and that his new show, about Africa, would have none of the language that the courts found objectionable.

"We live in a democratic country and I have to comply with the laws, despite the blatant political interference. As a comedian, I have pushed the debate to the very edge of laughter," Dieudonne said in a statement on French television.

Dieudonne, 46, has been repeatedly fined for "hate speech", and local authorities in several towns have barred his shows as a threat to public order. 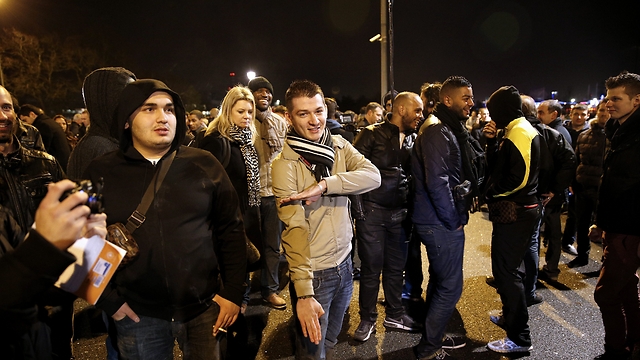 Interior Minister Manuel Valls has urged local authorities to take a hard line in determining whether or not to ban the show. Dieudonne had been due to perform in the city of Orleans on Saturday, but the show was cancelled by a local court following a request by the mayor.

Jacques Verdier, one of Dieudonne's lawyers, told the television channel iTele that the new show would not run foul of the courts.

Dieudonne's lawyers have repeatedly said the bans infringe his right to freedom of speech.

'We were the very symbol of anti-racism'

Critics say the comedian's trademark downward straight-arm gesture is a Nazi salute in reverse. Dieudonne counters that it is meant to be anti-Zionist and anti-establishment, but not anti-Semitic.

"I am not a Nazi, I am not anti-Semitic," Dieudonne said on Saturday.

The founder of the French far-right National Front, Jean-Marie Le Pen, has said he is the godfather of one of Dieudonne's children, but his daughter Marine Le Pen - who now runs the party - has kept her distance from the comedian.

The Jewish comedian Elie Semoun, with whom Dieudonne formed a popular comic duo in the mid-90s, said he did not understand the turn his old friend had taken.

"We worked together for 15 years. How did you support me for so long?" Semoun said in a short act on French TV on Saturday.

"When Dieudo and I started out together, we were the very symbol of anti-racism, to the point that I forgot that I was black and he was Jewish," Semoun said. "Too bad, I loved being black."