The takeover of the Klos-C ship exposed and foiled a strategic Iranian move which, had it been successful, would have been worthy of the definition "tiebreaker." The move was aimed at creating a situation in which, during an active conflict, the IDF missile and rocket interception system would be neutralized or would at least become inefficient. First of all, because according to foreign reports the Iron Dome system is incapable – or finds it difficult – to intercept heavy and long-range rockets like the Syrian-made M-302 that were captured. These medium-range rockets of up to 250 kilometers (155 miles) with a warhead weighing over 140 kilograms (310 pounds) are supposed to be intercepted by another system, Magic Wand (also called David's Sling), which is still being developed in the United States and Israel.
Arms Ship
US: We worked with Israel on tracking ship headed to Gaza
AFP
White House says Obama directed US military to work out contingencies in case it became necessary to intercept the vessel.
US: We worked with Israel on tracking Iran weapons ship headed to Gaza
This critical system, which will be the "second layer" in the multi-layer interception system the defense establishment is planning, will not become operational before 2016. So had the rockets reached Gaza, they would have allowed the Iranian's allies bordering on Israel to go around the Iron Dome system from the top, go around the Arrow system from the bottom, and explode unhindered in population concentrations in Israel – mainly in the Tel Aviv Metropolitan Area and Haifa Bay. During the Second Lebanon War, the Syrian-planned and manufactured 302-milimeter M-302 rockets proved how lethal and reliable they are. They are not accurate, but their heavy warhead and the reliability of the rocket motor make them a cheap "statistical weapon" which allows targeting large civilian communities and causing them heavy losses and damages. Software improvements have been made recently in the Iron Dome system, allowing it to also deal with heavier rockets than the short-range and relatively light Grad. During Operation Pillar of Defense, Iron Dome intercepted medium rockets of the Fajr-5 or M-75 models, made independently by Palestinians, which have a range of more than 70 kilometers (44 miles). But the limited number of Iron Dome batteries the IDF operates will make it very difficult to overpower a large amount of heavy and really long-range rockets like the M-202 or M-302, which will arrive from several directions at the same time, for example from Lebanon and Gaza, or from Lebanon, Gaza and Syria. The initiative of the Revolutionary Guards' Quds Force was aimed first and foremost at serving Iran, rather than Hamas, Hezbollah or Bashar Assad. The Quds Force organized a very complicated logistic operation here, which cost tens of millions of dollars and was carried out secretly while risking an exposure of the violation of UN sanctions by Iran and the Syrian regime. 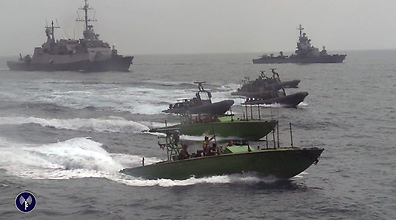 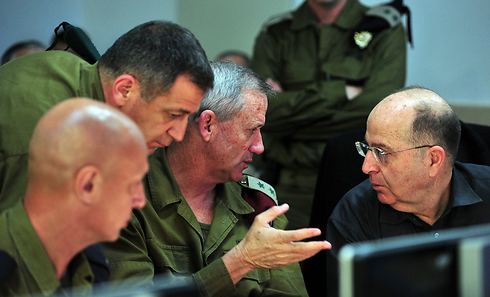 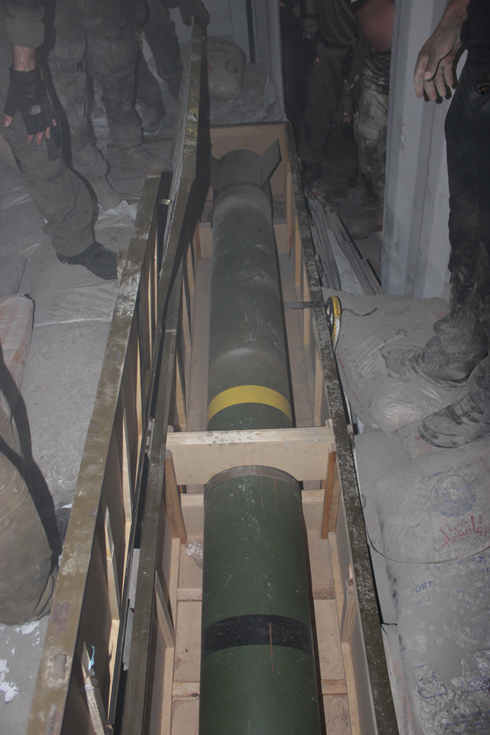 Hezbollah and the Syrians have had thousands of heavy M-302 and M-202 rockets for a long time. The decision to fly a large amount of these heavy rockets from Syria to Iran in order to equip Hamas and the Islamic Jihad in Gaza with them, and likely other groups as well, points to strategic planning.

Quds Force commander Qassem Suleimani would not have entered such an adventure if it were not a supreme strategic Iranian interest. For example, in case Iran decides to initiate an overall high-trajectory offensive on Israel through its messengers: Hezbollah, Syria and the Gazans.

When will Iran decide on such a move?

It's reasonable to assume that this is a response scenario to an IDF and/or American attack on Iran's nuclear facilities. In such a case, it's completely reasonable to estimate that the Iranians would demand that the Syrians and Hezbollah, as well as the Islamic Jihad and Hamas in Gaza and likely also terrorists in Sinai, deal Israel a lethal blow of rockets and missiles on its entire territory.

The Iranians are aware that the situation changed when Israel, with American aid, built a multi-layer rocket interception system. They are concerned that this system will eventually affect their ability to deal Israel a high-trajectory strategic blow, and are therefore preparing a system which will largely neutralize the abilities of Israel's active defense system for at least two years and maybe more – until the Magic Wand system becomes operational. Further proof that this is a supreme strategic Iranian interest and planning can be found in the fact that Suleimani and his men from the Iranian Revolutionary Guards, as well as Bashar Assad's men, were willing to hold their nose and send a delivery of expensive strategic weapons to their bitter enemy, the Sunni Hamas organization, which betrayed the Syrian regime and turned its back on it during its rough time. It's possible that the delivery was only intended for the Islamic Jihad, which is now operating as Iran's main branch in the Palestinian camp, but there is not a single chance that Hamas would have let such a cargo enter the Strip or even Sinai without an early agreement with the Iranians. It's possible that the distressed Hamas even received financial or other aid from the Iranians in return for its participation in the operation.

Nonetheless, the Iranian operation raises two critical questions. First of all, it's not at all clear how the Iranians planned to transfer such a large number of long-range and heavy rockets by land from Sudan through Egypt to Gaza. It's enough to remember the fact that the Egyptian army is tightly monitoring the smuggling tunnels from Sinai and the Strip and systematically destroying them. How did the Iranians and Palestinians plan to transfer such a shipment to Gaza under the Egyptians' nose? The answer may be that the plan was to transfer the rockets to their destination in "drizzles," over a long period of time.

Another question is how the Gazans planned to launch these large rockets from the Strip. After all, they are easily noticeable from the air when being prepared for launching, and likely beforehand too, and they can be accurately bombed from the air, sea and land, even if they are activated from underground launching holes prepared for them.

The obvious conclusion in light of these two questions is that a large part of the rockets on the arms ship – perhaps even all of them – were meant to reach Sinai and be activated from there. It's possible that the Gazans (Hamas, the Islamic Jihad and the Popular Resistance Committees) were supposed to leave the Strip for Sinai and build a hidden launching system there in an isolated area which the Egyptian army finds it difficult to reach and control, for example in Jabal Halal (height provides the M-302 with extra range).

The IDF does not enter Sinai and Israel Air Force planes don't fly in the peninsula's airspace so as not to violate the Egyptian sovereignty. The military regime in Egypt is known to be very sensitive about its national honor, and so an M-302 launching system in Sinai is ideal.

It's even possible that radical Sunni organization Ansar Bait al-Maqdis, which is affiliated with al-Qaeda, would have joined the move initiate by its bitter enemies, the Shiite Iranians. The rockets would have been transferred bit by bit, under the Egyptian army's nose, to the area where the hidden launching system would have been located – and the rest would have been written in the pages of history.

Missed opportunity in US media

In light of the strategic intentions and effort put in by the Iranians, one can say that the exposure and seizure of the Karine A vessel in the height of the second intifada (2002) is the only equivalent of the takeover of Klos-C in March 2014. This is an admirable achievement of the intelligence community.

Like in any successful intelligence-operational campaign, the main accomplishment belong to those who exposed the initial information, the lead, realized that they had something unusual in their hands and decided to share it with others in the community and set a complex move in motion, in which the Mossad showed an ability which vitally complemented what was achieved by the optical and electronic tracking sensors operated by the Intelligence Directorate. 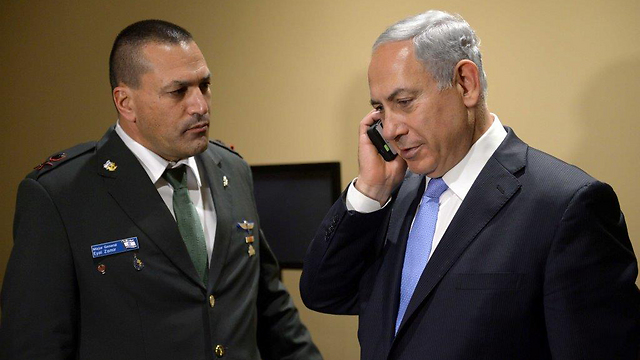 Netanyahu in US. Media busy with Ukraine crisis

The Intelligence Directorate also built the overall picture, and its people not only estimates correctly "what is going on here" but were also able to provide operational intelligence which allowed the heads of the IDF's operational system, led by the chief of staff, to present an optimal thwarting plane.

It's important to stress that the detailed and accurate real-time intelligence information provided the military and political leaders with something worth a fortune: The freedom of choice. They were able to decide which of the thwarting options would provide optimal results with minimum casualties and minimum political, public opinion, legal and media damages. As is customary in such cases, the Operations Directorate and division commanders place a number of options on the defense minister, prime minister and chief of staff's table. For example, bombing from the air or raiding from the sea or other types of operations which were looked into and found to be reliable in the past. Thanks to the detailed intelligence information, Chief of Staff Benny Gantz was able to recommend to Minister Ya'alon and Prime Minister Netanyahu an outline of operation which is both in line with the international maritime law, does not involve any special risk to human life and provides several desirable outcomes: Not just thwarting the Iranian plans and their ramifications, but also a nice public opinion-PR achievement, and mainly in good timing, with Netanyahu in the US, less than 24 hours after he warned President Obama in a conversation in his office against the fraudulent and deceitful methods used by the Iranians. It's a shame, however, that the American media is mostly busy right now with the Ukrainian affair and the administration budget for next year, which Obama presented to the Congress and the public on Tuesday. The American media, like the media in the entire world, has a limited attention span and it is mainly occupied with domestic issues. So Israel missed an opportunity to illustrate to the American public that the Klos-C, sent in an Iranian violation of UN Security Council resolutions, is just an allegory of what the ayatollahs and Revolutionary Guards are doing in Fordo and in other nuclear facilities "for peaceful purposes."