It's not just your grandmother's matzo anymore

In recent years, Passover matzo has undergone a makeover with new recipes and flavors for the large cracker with a big place at Seder table – but a bad rep in the taste department.

When Amy Kritzer was growing up in Connecticut, her mother made lasagna from matzo each Passover.

The holiday, which commemorates the end of slavery for the Hebrews in ancient Egypt, calls for Jews to avoid leavened grain in products like regular pasta and bread, so it's matzo's biggest moment of the year. But lasagna?

"We almost never ate lasagna the rest of the year," Kritzer, 31, laughed. "I was sure I could live without it that one week. But it was like a little challenge, what to do with the matzo."

In recent years, matzo has undergone a makeover as the people who churn it out – by hand or machine – and the people who eat it have come up with new recipes and flavors for the large cracker with a big place at the Seder table – but a bad rep in the taste department.

"It turns out it's a pretty darn good canvas," said Lucinda Scala Quinn, executive editorial director of food at Martha Stewart Living, where the company's test kitchen has been coming up with new ways to use matzo. "We live in an age where everybody, it seems, is an inventive cook. Matzo has been this undiscovered ingredient waiting to be used beyond just kind of breaking it at the Seder," she said. 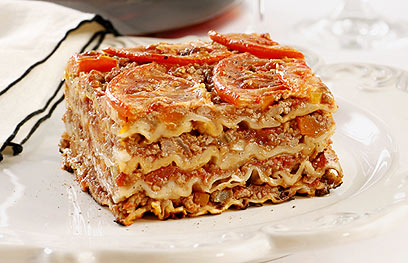 Lasagna from matzo. 'Like a little challenge' (Photo: Danya Weiner)

This year, Passover begins the evening of April 14, and at Kritzer's house in Austin, Texas, where she often hosts Seders, matzo has some new buddies.

"Ironically, all of my non-Jewish friends love matzo," said Kritzer, who has a recipe blog called Whatjewwannaeat. "I think because they don't have to eat it, they're like, 'Matzo, it's delicious.' And all of the Jews are like, 'What, I don't want to eat this.'"

In addition to boxed matzo, from onion-poppy to chocolate-covered, we now have Matzolah, a commercial matzo granola that was 35 years in the making in Wayne Silverman's kitchen.

He put it on the market last year, after selling it in stores briefly over a decade ago, and earned accolades at Kosherfest, an annual showcase for kosher foods. There's maple nut, whole wheat maple nut and gluten-free cranberry orange.

"When a Jewish person sees matzo they say, 'Oy, matzo.' Dry, sticks to the roof of my mouth. And when they see a product for Passover they say, 'Oy, Passover. Even worse.' We've tried to get people away from that notion," said Silverman, in Decatur, Ga.

He chose "The Trail Mix of the Exodus" as Matzolah's slogan.

Doug Freilich of Middletown Springs, Vt., makes small batches of artisanal matzah he calls Vermatzah. He started production about six years ago with help from his wife and two daughters. He makes his matzo in the more traditional round shape using grain he grows and grinds himself, then pops it into his wood-fired oven and wraps it in parchment paper with a delicate tie before gently placing six pieces in metal tins of bright green, red and yellow.

Freilich sells online and ships around the country, also using simple cardboard boxes. Sisterhoods at synagogues like his matzo, as do customers at food co-ops around the Northeast.

"We want to stay small and sustainable and really hold on to that quality," he said, noting that his matzo is "eco-kosher" but does not meet the stricter kosher rules for Passover.

US matzo market worth about $86M a year

The DIYers are in full force on the matzo front. They're going online to show off chocolate-dribbled matzo s'mores, matzo melted cheese sandwiches, matzo brei cupcakes (named for a matzo-egg dish) and matzo napkin rings made of color-copied prints of the real thing.

Taking a cue from gingerbread houses, matzo houses incorporate traditional Passover treats as decorations and chocolate as mortar. Other matzo creations include nutty, fruity brittles and barks in chocolate and caramel, matzo-layered ice cream cakes, toasted matzo crumbles on salads and matzo-crusted chicken cutlets. Quinn likes spreading herb, spiced or lemon zest-infused olive oil on matzo, then baking it, or giving the oil as a Passover gift in a fancy bottle. Matzo-themed kitchen timers, aprons and iPhone cases are abundant.

"There's been quite a bit of movement in the matzo," observed Menachem Lubinsky, Koshertoday.com editor and co-producer of Kosherfest, an event he helped found 25 years ago. "I think the sky's the limit here. The opportunities are enormous." Kosherfest is scheduled to take place in November in New Jersey this year. Last year, it featured about 11 flavors of matzo, he said.

With only two major mass manufacturers of matzo left in the US, Manischewitz in Newark, NJ, and family-owned Streit's on the Lower East Side of Manhattan, American box matzo has lost ground to imports, primarily from Israel, Lubinsky said. More traditional, round and extra crispy handmade matzo – especially "shmura" made of a carefully guarded grain, is also popular.

Lubinsky and others see increasing interest in matzo among non-Jews, and from Jews year-round. "We do just as much matzo during the year as we do for Passover. It wasn't always that way. It used to be probably 80% Passover, 20% daily," said Aaron Gross, in the fifth generation of the Streit family.

The US matzo market is worth about $86 million a year and the Israeli market more than $100 million, Lubinsky estimated.

Even old-school matzo makers like Streit's offer a variety year-round – including whole wheat and Mediterranean, with sun-dried tomatoes, garlic, basil and olive oil. But the company sticks closer to basics for Passover, adhering to special procedures that include thorough cleanings of the nearly century-old factory, a six-story plant in a string of old tenements. Equipment is scrubbed again and again between batches, and the matzo must bake within 18 minutes once the water and wheat are mixed -- all under rabbinical supervision.

Streit's produces 2,000 pounds of kosher-for-Passover matzo an hour between September and two weeks before the holiday begins. "It's just a very painstaking, long, labor-intensive process, and we've been doing it the same way all these years," said Gross, who runs the plant with two cousins.

"They say the most difficult things to make are with the fewest ingredients," he added. "You can't get much fewer than flour and water, right?"