The rabbi who got Abbas to denounce the Holocaust

Together with Imam Shamsi Ali, Rabbi Marc Schneier has made it his life's mission to bring Muslims and Jews closer. Their activity includes Holocaust remembrance event in Tunisia, conference on Shoah and Islam planned by Austrian Muslim community.

Rabbi Marc Schneier, who has been rated as one of the 50 most influential American rabbis by Newsweek magazine and is nicknamed "the celebrities' rabbi," has made it his life's mission to bring Muslims and Jews closer together.

Along with Imam Shamsi Ali, he has established the Foundation for Ethnic Understanding (FFEU) to promote interfaith understanding between "Abraham's sons" around the world.

One of the difficult challenges the rabbi and the imam are facing is commemorating the horrors of the Holocaust in the Muslim world, which tends to ignore the biggest crime of humanity in the recent generations.

The meeting with Rabbi Schneier was held about two weeks ago, several hours before he traveled for a meeting with Palestinian President Mahmoud Abbas, who is perceived as a Holocaust denier.

Rabbi Schneier promised during the interview to get a special declaration from the Palestinian president, and he indeed sent a statement from Abbas on the eve of Holocaust Remembrance Day.

"What happened to the Jews in the Holocaust is the most heinous crime known by mankind in modern times," the statement read. "President Abbas expresses sympathy for the families of the innocent victims – Jews and others – who died at the hands of the Nazis.

"President Abbas stressed that the Holocaust is a reflection of the concept of ethnic discrimination and racism which the Palestinians strongly reject and act against." He added that "the world must do its utmost to fight racism and injustice in order to bring justice and equality to oppressed people wherever they are," and stressed that "the Palestinians people are still oppressed and denied freedom and peace." 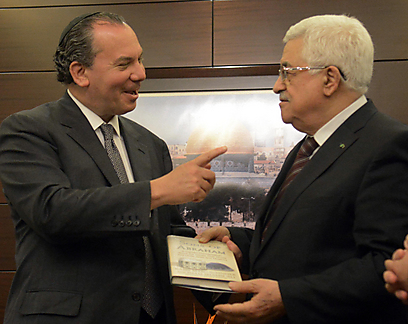 Rabbi Schneier with Abbas. 'He immediately told me that he sees the Holocaust as the biggest tragedy of the modern era' (Photo: Sasson Tiram)
"I said to him, 'You are not just a Palestinian leader, you are also a Muslim leader,'" Rabbi Schneier told Ynet in a special interview. "'I want to see your voice being heard also on issues which are not linked directly to the Israeli-Palestinian conflict. The Jewish community, as well as the Israeli community, have to hear you express your condolences and your empathy on this day.' "And the truth is that even before I was finished, he immediately said to me, 'I see the Holocaust as the greatest tragedy of the modern era, when hundreds of thousands of women, men and children were led to their deaths in the gas chambers. And I will prepare a special message for Holocaust Day for the Jewish world.'"

'I was filled with prejudice'

Rabbi Schneier is an optimist. Only an optimist can walk around Muslim communities, sometimes anti-Israel, and try to promote the commemoration of the Holocaust and bring Jews and Muslims together.

"People grow up, people change," he says of Abbas. "That's the whole idea of repentance: To grow from the mistakes of the past. "If Abbas wrote a controversial doctoral thesis so and so years ago, that doesn't mean that his opinion can't change. I am giving him the benefit of the doubt… I have also gone a very long way. My opinions, which were as racist, have changed." 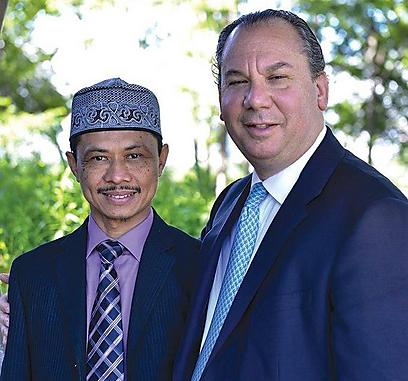 With Imam Shamsi. 'Muslims in Austria have never heard an imam talking against the Austrian silence during the Holocaust' (Photo: Foundation for Ethnic Understanding)
Schneier serves as the rabbi of the Hampton Synagogue in Long Island, which belongs to the Modern Orthodox stream. He met Imam Shamsi Ali about seven years ago in a CBS television studio. "There is no need to mention that we both come from very different places, to say the least," he says. "Shamsi was born in Indonesia and studied Koran in educational institutions in Saudi Arabia. I took the routine course in a rabbinical Orthodox home. I studied at a yeshiva, and I of course had very solid opinions about Muslims – demonic and monstrous. "Had you asked me 25 years ago about my feelings towards Muslims, you would have been certain that I was filled with prejudice. You must know that people are born into prejudice. They don't necessarily choose it. Muslims were no less than monsters to me.

"When the participation of children in a trip organized by the UN was thwarted in Gaza because it included a visit to the Holocaust Museum, the person who responded – at our encouragement – was senior Muslim leader Sayyid Syeed, who serves as the secretary general of the Islamic Society of North America. He is a big fighter against Holocaust denial," Schneier adds. "He sent a very serious letter to Khaled Mashaal and the Hamas leadership, in which he firmly protested their decision. In the letter he even asked leaders in Islamic countries to expose the young generation to the horrors of the Holocaust in order to better understand the Jewish people." 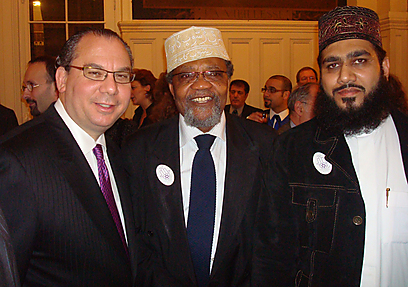 First mass candle lighting at mosques and synagogues in memory of Holocaust victims to take place in 2015 (Photo: Foundation for Ethnic Understanding)
Schneier reviews joint battles he waged with the help of Muslim and Jewish communities in Europe, including on the ritual slaughter and circumcision issues. A book he wrote together with Shamsi, which was funded by King Mohammed VI of Morocco, illustrates that dreams of coexistence and interfaith peace could become a reality. "We are not there yet, in the 'promised land,' definitely not," he says. "But four years ago I wouldn't have believed what we've achieved today: On the latest Holocaust Remembrance Day, Muslims in France, including the Bahrain ambassador, took part in the events. I see it as a huge step that the representative of a Muslim country makes such a gesture. "Last November I was invited by the Jewish community in Austria to speak at a conference about the Holocaust issue. The organizers' next question was whether the imam (Shamsi) would attend too. In the current reality there are some 50,000 Jews living in Austria compared to 600,000 Muslims. It's impossible for such a large community not to recognize a tragedy which took place right here." Schneier adds that "the local Muslims had never heard an imam talking about anti-Semitism, or against the silence in light of the horrors of the Holocaust which took place in this country. It was a new experience for them. "The head of the Muslim community announced then that on the next International Holocaust Remembrance Day the Muslim community would address the Holocaust issue. At the same time, they are planning a two-day conference on the issue of Islam and the Holocaust." Do you help them collect material on the issue?

"Of course. We don't tell them what to do or how, and if it will be as part of some study program, or even connect them to local Holocaust survivors to provide a personal testimony. But we definitely supply them with everything they need. There was a Holocaust remembrance event in Tunisia – for the first time in a Muslim state – that we sponsored. I hope other Muslim countries will join the initiative."

'This is only the beginning'

Schneier and Shamsi engage in another fascinating project, the "twinning of mosques and synagogues" alliance, which brings Jewish and Muslim communities together for joint activities.

"On Holocaust International Day 2015, for the first time, there will be a mass candle lighting at mosques and synagogues in memory of the victims," Rabbi Schneier says. "We are only at the beginning of our journey to disseminate the lessons of the Holocaust to the Muslim world." Rabbi Schneier refers to his activity as a "critical challenge," saying that "you must understand the current demographic situation in the United States, which the Israelis unfortunately don't really see: In 2020, the majority of the United States will be Hispanic-black. The country is changing, along with the list of priorities. It is very naïve on our part to assume that the young generation will continue in the same line. "The current estimates talk about three to seven million Muslims in the United States today, and this community is becoming increasingly influential. We have two Muslim Congress members today, and the large Jewish communities in New York exist alongside even larger communities of Muslims. The goal is to build the bridges between them correctly and work together to advance joint goals and mutual solidarity."