Csanad Szegedi. 'I want to be a bridge'

Two years after being dumped by Jobbik party for admitting he is a Jew, Csanad Szegedi completes astonishing transformation: Going to synagogue, eating kosher and adopting Hebrew name Dovid.

He was a rising star of Hungary's far-right, dumped by his party after he admitted he was a Jew. Two years later, Csanad Szegedi has completed an astonishing transformation: He goes to synagogue, eats kosher food and has adopted the Hebrew name Dovid.

As a leader in Hungary's Jobbik party, Szegedi whipped up crowds by accusing Jews of "buying up the country" and mocking the "Jewishness" of Hungary's political class. Then came the revelation that upended his career: His maternal grandparents were Jews – which under Jewish law made him one, too. Szegedi acknowledged his roots after video surfaced of a suspected blackmailer confronting him with evidence of his Jewishness.

In the political wilderness, Szegedi has apparently had a spiritual awakening.

Last year, he sought out a young rabbi in the local Orthodox Jewish community. After a period of intense religious instruction, Szegedi was circumcised last June, a year to the day after he broke with Jobbik. Today he takes Jewish religion classes with his wife, who is also converting to Judaism.

"I am just as Hungarian as until now, but I have expanded my own identity with the Jewish identity," Szegedi, 31, told The Associated Press. "I have two tasks ahead of me – to teach and to learn. I want to be a bridge." 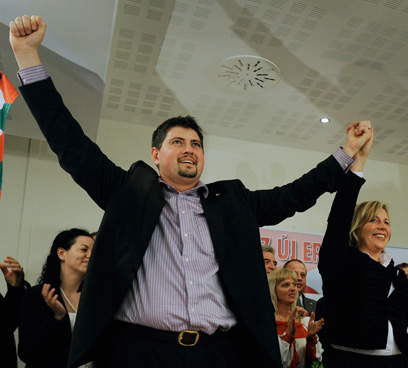 Szegedi. 'I am just as Hungarian as until now, but I have expanded my own identity with the Jewish identity' (Photo: AP)

Szegedi was a founder of the Hungarian Guard, a now-banned militia whose black uniforms recalled the Arrow Cross, a pro-Nazi party that briefly governed Hungary at the end of World War II and killed thousands of Jews. As a Jobbik member, he took one of the three seats the party won in 2009 European Parliament elections.

Szegedi kept his seat after being dropped by Jobbik and went on to advocate stronger ties with Israel and Roma integration, while condemning the rise of extremism in the EU.

The first step in Szegedi's personal transformation came days after Jobbik kicked him out – ostensibly because Szegedi offered the blackmailer hush money, not because he was Jewish.

'I was able to cleanse my own past'

Szegedi had just published a 316-page book of his interviews, speeches and writings, including anti-Semitic rants. He asked bookstores to return several thousand copies of "I Believe in Hungary's Resurrection," dumped them in an oil drum at a railway depot – and set them on fire.

"To burn a book is always a barbaric, primitive thing, but I felt that, symbolically and spiritually, fire always cleanses," Szegedi told The AP. "With this I was able to cleanse my own past and bring that era to a close. The cover has my picture on it and it was very strange to see my face burn."

Still, he decided to save a few copies "so I can give them to my children and tell them, 'This also belongs to your father's life.'"

Chief Chabad Rabbi Boruch Oberlander, who is teaching Szegedi about Judaism, said the former rightist's change of heart appears to be authentic.

"He is still very young so he can start all over again," said Oberlander. "He is winning many friends in the Jewish community."

After his circumcision, Oberlander added, "some Jews said, 'Ah, now we see that he is really serious.'"

Oberlander said Szegedi was an "extreme example" of how Hungarian Jews were rediscovering their identities. Upon learning he was a Jew, Szegedi also found out that his grandmother survived Auschwitz, and his grandfather a Nazi labor camp.

'Most Jobbik voters are not anti-Semitic'

The grandmother, Magdolna Klein, kept her heritage hidden for fear the persecution would be repeated, a common choice among Hungarian Holocaust survivors. Those fears, still present nearly 70 years later, made her plead with her grandson to keep quiet after he learned he was a Jew, Szegedi said.

It was only shortly before she died in March, at age 94, that she was able to accept her grandson's embrace of Judaism, he said.

"On her death bed," Szegedi said, "my grandmother said that deep in her soul she was happy that her youngest grandson was picking up the chain which had been broken in the 1950s."

Szegedi now sees no redeeming values in his former party, but defends its supporters. He attributed his own extremist politics to ignorance and the influence of friends he made when he moved to Budapest from eastern Hungary to study history at university.

"The political intention of Jobbik's leadership is to generate tensions in society," Szegedi said. "It does not make much sense to debate with them, but the majority of Jobbik's one million voters are not anti-Semitic or racist – they are simply people in despair."

Szegedi has spoken to young people about his experiences and racial harmony in several schools, including before a class of 14-year-olds in his alma mater in his hometown of Miskolc, which he called a "rewarding experience." He is planning similar talks at more schools. In May, he spoke to a group of Hungarian schoolchildren about the Holocaust during a visit to Auschwitz.

"Giving a presentation to 40 children at the gates of Auschwitz was surreal," said Szegedi.

Szegedi has visited Israel twice in the past two years. As he spoke to AP outside Budapest's Dohany Street synagogue, the largest in Europe, a tourist from Tel Aviv recognized Szegedi from an Israeli television appearance – and asked him to pose for a picture with him.

"I choose to believe that he had that shock in his life when he discovered he was Jewish," said the tourist, Ofer Kol. "The story was very touching."