Obama. Caught with his pants down.
Photo: Reuters

Analysis: Obama says he's not ruling out any options, but no one is buying it anymore. As the Iraqi army abandons its posts to Islamists, the Obama administration is not left with many options.

US President Barack Obama was sitting in the Oval Office next to Australian Prime Minister Tony Abbott and tried to come up with an alibi for the astonishing events in Iraq that caught the White House with its pants down.

"Over the last year we have been providing them with additional assistance to try to address the problems that they have in Anbar, the northwest portions of the country, as well as the Iraqi and Syrian border," Obama continued. "That includes in some cases military equipment, it includes intelligence assistance, includes a whole host of issues."

However, "What we’ve seen over the last couple of days indicates the degree to which Iraq's going to need more help... from us and from the international community," he added. 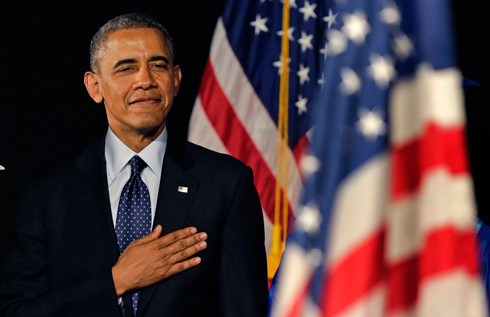 Photo: AP
The American aid came in the form of military vehicles, hundreds of Hellfire missiles and other weaponry from Uncle Sam's arsenal. F-16 fighter jets and Apache helicopters are also on their way to Iraq. But maybe it's best these arms doesn't arrive at all. The Americans had no idea that the Iraqi army they equipped, trained and funded with billions of dollars, would desert these areas without a fight, and leave the American equipment to be taken by the terrorists.

According to the British Telegraph, 800 jihadist fighters from Mosul, a city of 2 million, succeeded in chasing off 30,000 soldiers and 25,000 policeman. 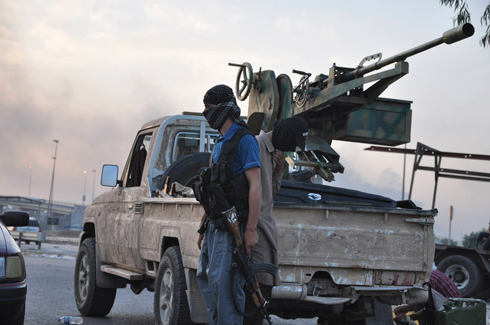 This was the Americans' doomsday scenario. Three years after leaving Iraq, they are watching on TV how extremist Islamist forces, more cruel than al-Qaeda, are racing towards Baghdad in American armored vehicles and besieging the oil fields in the northern part of the country. 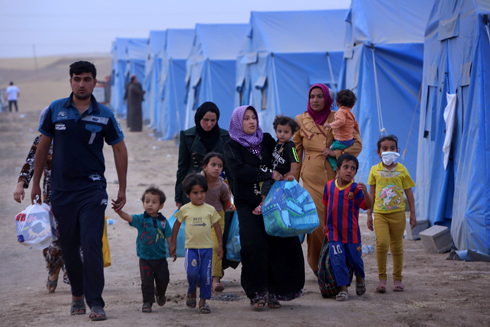 The Iraq crisis already caused a big wave of refugees fleeing areas seized by Islamists (Photo: AFP)
The greatest mistake of George W. Bush's presidency was Iraq. Obama's greatest mistake was Syria. And now the Islamist forces are erasing the border between the two states. These artificial borders were drawn by the British and French in the 1916 Sykes–Picot Agreement and exist solely on paper. In reality, Bashar Assad and Nouri al-Maliki are fighting over control of Damascus and Baghdad and don't really care about borders. Signs declaring "you break it, you buy it" hang near fragile products in American stores. "If you break Iraq, it is yours," former US secretary of state Colin Powell warned Bush junior before the American invasion in March 2003. And this is exactly what happened. Iraq was broken into different districts - Kurdish, Sunni and Shiite.

After almost a decade of casualties and billions of dollars that emptied out the American coffers, the Americans left Iraq in December of 2011. 4,477 Americans were killed in the war in Iraq and 32,000 were wounded. 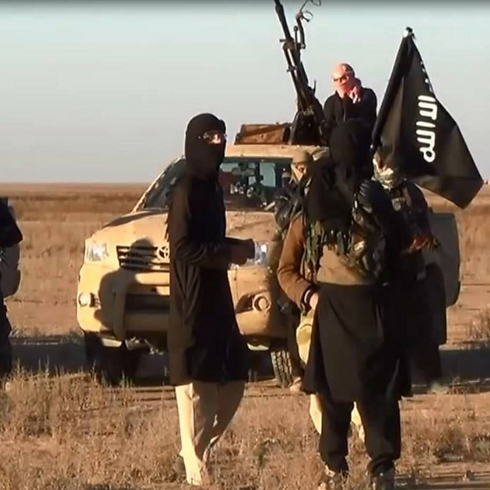 Sunni rebels near Tikrit (Photo: AFP)
But even after the US military left Iraq, thousands of American contractual workers continued training the Iraqi army, and the United States spent $15 billion so far to rehabilitate the Iraqi army. Now, these American contractual workers are being smuggled to safety. Then-president Bush was the one who signed on an exit date for US forces with the Iraqi government, while it was Obama who happily carried out that withdrawal. After all, he was elected with a mandate from the public to get out of Iraq. But even he can't escape blame. Obama's true responsibility in this crisis lies in his disastrous handling of the Syria crisis. In her memoir "Hard Choices," former US secretary of state Hillary Rodham Clinton writes that she supported arming the Syrian rebels in the early stages of the civil war, but the White House refused. Former US ambassador to Syria, Robert Ford, was even blunter when told CNN that the Obama administration's failure to arm the moderate opposition in Syria in a much earlier stage prevented Assad's ouster, and allowed the jihadists into Syria. Those jihadists later started moving freely between Syria and Iraq and operate training camps in the desert. The Iraqi government has asked the Americans to bomb these training camps, but Washington refused. The Americans have a score to settle with Shiite Prime Minister al-Maliki who, instead of being the prime minister of all Iraqis, only advanced his Shiite agenda and actively caused the division in Iraq. They would've liked to re-educate him, but they don't have time for this. Obama said he was looking at "all options," but the world as a whole and the Middle East in particular are no longer buying it. American troops won't be sent to fight on Iraqi soil - this is obvious. But the American president is aware of the fact that a lot is at stake "in making sure that these jihadists are not getting a permanent foothold in either Iraq or Syria, for that matter." What to do? What are the options? Not many. Military analysts explain that an aerial strike alone won't solve the problem. The United States can't strike from the air when it doesn't know what's happening on the ground. Without Americans in the field to guide the attacks they'd have to count on Iraqi forces on the ground, but the Pentagon just doesn't trust them. Another option is launching drones towards intelligence targets. At the moment, however, the Kurds in the north are taking over the oil fields in Kirkuk, and the Iranians have announced that they are sending Revolutionary Guard Corps to Baghdad to help al-Maliki. In Washington, the Pentagon put the military option on the president's desk, and he needs to make a decision.