The Shas movement's new spiritual leader, Rabbi Shalom Cohen, ruled this week that women must not pursue an academic degree – not even in teaching and not even in ultra-Orthodox institutions – as the learning material contradicts the Torah. After the supporters of higher education in the haredi sector rushed to present letters showing that the movement's late spiritual leader, Rabbi Ovadia Yosef, had in fact encouraged women to study, Rabbi Cohen issued an amended statement saying that it is permitted, under certain conditions.
Exclusion of Women?
Haredi women accuse Bennett of discrimination
Kobi Nachshoni
Ultra-Orthodox women slam decision not to include them in economy minister's program for integration of haredim in civil service.
Haredi women accuse Bennett of discrimination
The affair began when Cohen issued his first letter as Shas' spiritual leader, which was published in the Kikar Hashabat website. According to the letter, "Our masters, the greatest sages of Israel, were completely against academic studies, even in haredi colleges, as a significant number of the lecturers are university graduates and do not hold the pure religious outlook we were educated on." Rabbi Cohen further argued that the curriculum in these institutions was based on "research and scientific methods which contradict the views of the Torah," and that therefore "female students should not even think about studying in any academic framework, as this is not the way of the Torah."

The complete ban on women's academic studies embarrassed the Shas leadership and the late spiritual leader's family, as Yaffa Deri, the wife of Shas Chairman Aryeh Deri, runs an academic institution herself, as does Rabbi Ovadia Yosef's daughter, Rabbanit Adina Bar-Shalom, who founded the Haredi College in Jerusalem and even won the Israel Prize for it. 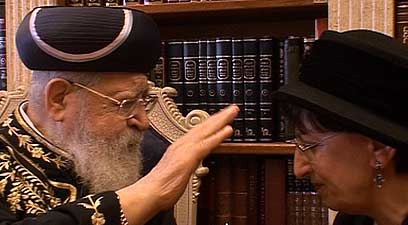 The late Rabbi Ovadia Yosef with his daughter, Adina Bar-Shalom, who founded the Haredi College in Jerusalem

In the past few days, haredi officials have been presenting statements signed by the late Rabbi Yosef, in which he called on haredi women to study in his daughter's institution.

In a letter from 2001, Rabbi Yosef praised Rabbanit Bar-Shalom, for her "blessed initiative to establish a haredi college for girls, in which they will undertake academic studies in different subjects in pursuit of a suitable degree, so that they will be able to integrate into the public market and governmental institutions which the haredi public has had no access to until now." He added that Bar-Shalom's institution was being run "in the spirit of the Jewish people, in a holy manner," and said he hoped his daughter would be "blessed above all women." Rabbi Yosef even urged the public to support the college financially. In a letter from 2004, the rabbi called on the "dear women teachers of the education network to undertake BA studies in education" at the institution. In 2005, he wrote that it was forbidden to study in "foreign institutions which the sages' spirit is not contented with," but that in a haredi college it is permitted and even desirable for women seeking to "let their husbands work on our holy Torah."

In response to the published letters, Rabbi Cohen's associates issued a sort of clarification in the form of a manifesto he had signed together with other rabbis in 2009, which states that under certain conditions, a haredi woman is permitted to study in a "kosher" academic institution.

The associates explained that the rabbis' first statement focused on the permission and the later statement focused on the prohibition, but that he in fact shares the same opinion as Rabbi Ovadia Yosef. In the "amendment" letter the new spiritual leader wrote that married women who are already working in the educational system may complete a bachelor's degree, while single women who are not teachers yet should be interviewed by an "exemption committee" of rabbis, who will only let them study if they are "convinced that it is for a purely spiritual purpose."

In any event, he clarified that "this is all under the condition that all lecturers will be eligible to teach according to the ways of our forefathers, and that all the studies and content will be based on the words of our masters."