Only 75 haredi recruits a month in past quarter
Photo: Yaron Brener

MK Shaked. 'We are at the beginning of a process'
Photo: Gil Yohanan

IDF: Number of haredi recruits down 50%

The number of ultra-Orthodox men who have joined the IDF in the past year has dropped by 50%, with an average of 75 haredi recruits per month in the last quarter, according to figures presented to the Knesset's Shaked Committee for an equal share of the burden. A report presented to the committee by Lieutenant Colonel Shai Tayeb of the IDF Personnel Directorate shows that 601 haredim joined the army in the first quarter of the past enlistment year (July 2013 to June 2014), while only 294 haredim were drafted in the last quarter.
War on Draft Law
Yeshiva students urged not to report to IDF recruitment centers
Moshe Heller
Radical haredi leaders fear young men arriving to receive exemption from military service will be 'brainwashed' to join army or labor market instead of studying Torah.
Yeshiva students urged not to report to IDF recruitment centers
A slight increase was recorded between the first and second quarter, from 601 to 634 haredi recruits, but then, apparently due to the equal burden committee's intense discussions, the number of recruits dropped 30% to 443 in the first three months of 2014. According to estimates, even the "moderate haredim" shut themselves up in the face of the imminent "destruction decree." 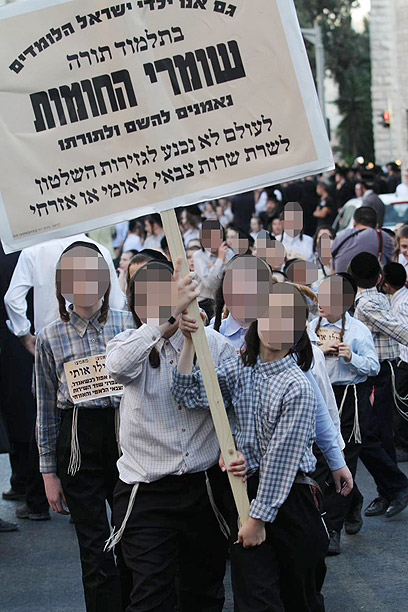 The next quarter began in April 2014, immediately after the final approval of the IDF draft law, and saw a significant drop of 33% in the number of haredi recruits from the third quarter, a 51% drop from the first quarter and a 54% drop from the second quarter.

A total of 863 of the past year's haredi recruits serve in the Netzah Yehuda (Nahal Haredi) units, 819 joined the different Shahar courses and 290 chose regular service, 96 of them in combat units.

The Knesset committee's chairwoman, MK Ayelet Shaked of the Bayit Yehudi faction, appeared satisfied with the army report. "The figures presented to the committee show that the annual targets are being made, yet there is a slowdown," she said.

"We are at the beginning of a process, and these are its labor pains. The haredi society is facing a difficult test after the enactment of a law which changes the order of its life. The state of mind in the haredi public is not easy, but I believe that through cooperation between the military, civil and political bodies, the enlistment process will succeed."

'Only economic sanctions will help'

Attorney Rabbi Uri Regev, CEO of Hiddush - Freedom of Religion for Israel, who has been following the committee's discussions, blamed the situation on the decision to draft haredim, as well as punish draft dodgers, if they fail to meet the targets set by the government. He argued that the decision caused the young members of the haredi members to shut themselves up.

"All of the army's concealment attempts can't cover the fact that the draft law led to a significant drop in the haredi public's integration process," Regev said. "This all happened because the Yesh Atid party insisted on a law devoid of meaning which includes criminal sanctions, and turned down a real efficient law based on economic sanctions." Regev called on the government ministries to remove bureaucratic barriers for the law's implementation, and urged the haredi leaders to understand that disobedience will damage the yeshiva world. "After the damage has already been caused, we should all aspire to meet the targets of military service and civil service," he said. "This will prevent the need to impose sanctions and will spare a painful social rift."

Hiddush Vice President Shahar Ilan added that "if the current draft pace continues, the army has no chance of reaching enlistment targets the government set for next year.

"We saw how proud the haredi public was of the Netzah Yehuda soldiers operating in Operation Brother's Keeper. This is further proof that the targets are achievable. The trust between the army and the haredi public must be restored." Israeli Forum for the Promotion of Equal Share in the Burden said in response that "this is further proof of the failure of what is known as 'the equal share of the burden law.' While the ministers and Knesset members presented the public with a false display of equality and improving the situation, they in fact offered a mass exemption, delayed service and left those carrying the burden alone in the battle."

According to the Forum, "It's time to say out loud that (Finance Minister) Yair Lapid, who grabbed the opportunity of the haredi draft on his way to the government, and Ayelet Shaked, who took it upon herself to lead the committee, abandoned their voters, gave the haredim privileges and an employment advantage and brought about a new law – the law for an unequal share of the burden.

"We must wake up and realize that we are facing irreversible damage with only one solution: Universal draft – whether to military service or civil service."