Bacall, cousin to former president Shimon Peres, was a movie star from almost her first moment on the silver screen. Her title burnished over the years with pivotal roles, signature New York wit, and a marriage to Bogart that accounted for one of most famous Hollywood couples of all time.

Lauren Bacall, the award-winning American film star - and cousin to former president Shimon Peres - died Tuesday in New York City at the age of at 89.

Bacall was born Betty Joan Perske on September 16, 1924 in the Bronx, New York, the only child of Natalie Weinstein-Bacal, a secretary who later legally changed her surname to Bacall, and William Perske, who worked in sales.

Both her parents were Jewish. Her mother emigrated from Romania through Ellis Island and her father was born in New Jersey to Polish-born parents.

Bacall was proud of her Jewish heritage and said "I love being Jewish, I have no problem with it at all. But it did become like a scar, with all these people saying you don't look it"

Bacall was a movie star from almost her first moment on the silver screen.

A fashion model and bit-part New York actress before moving to Hollywood at 19, Bacall achieved immediate fame in 1944 with one scene in her first film, "To Have and Have Not." Leaving Humphrey Bogart's hotel room, Bacall - a lanky figure with flowing blond hair and a stunning face - murmured: "You don't have to say anything, and you don't have to do anything. Not a thing. Oh, maybe just whistle. You know how to whistle, don't you, Steve? You just put your lips together and blow." 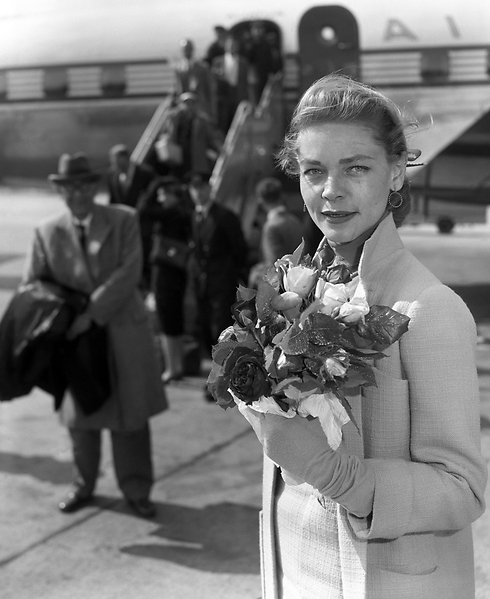 Bacall was proud of her Jewish heritage (Photo: MCT)
With that cool, sultry come-on, not only was a star born, but the beginning of a legend, her title burnished over the years with pivotal roles, signature New York wit, and a marriage to Bogart that accounted for one of the most famous Hollywood couples of all time. The Academy-Award nominated actress received two Tonys, an honorary Oscar and scores of film and TV roles. But, to her occasional frustration, she was remembered for her years with Bogart and treated more as a star by the film industry than as an actress. Bacall would outlive her husband by more than 50 years, but never outlive their iconic status. They were "Bogie and Bacall" - the hard-boiled couple who could fight and make up with the best of them. Unlike Spencer Tracy and Katharine Hepburn, Bogart and Bacall were not a story of opposites attracting but of kindred, smoldering spirits. She was less than half Bogart's age, yet as wise, and as jaded as he was. They starred in movies like "Key Largo" and "Dark Passage" together, threw all-night parties, palled around with Frank Sinatra and others and formed a gang of California carousers known as the Holmby Hills Rat Pack, which Sinatra would resurrect after Bogart's death. She appeared in movies for more than a half-century, but none brought her the attention of her early pictures. Not until 1996 did she receive an Academy Award nomination -- as supporting actress for her role as Barbra Streisand's mother in "The Mirror Has Two Faces." Although a sentimental favorite, she was beaten by Juliette Binoche for her performance in "The English Patient." She finally got a statuette in November 2009 at the movie academy's Governors Awards gala. "The thought when I get home that I'm going to have a two-legged man in my room is so exciting," she quipped. Her persona paralleled her screen appearances: She was blunt, with a noirish undertone of sardonic humor that illuminated her 1979 autobiography, "By Myself" (she published an updated version in 2005, "By Myself and Then Some.")

Bacall was born Betty Joan Perske in the Bronx on Sept. 16, 1924 to Jewish parents Natalie Weinstein-Bacal and William Perske. Her Romanian-born mother gave her the name Bacal after her parents divorced when she was five. She added the second 'l' when she became an actress.

"My childhood is a confusion," Bacall wrote in "By Myself," which made Bacall one of the rare celebrity authors to win a National Book Award. She told of nightmares over the arguments of her parents, of her mother's struggle to earn a living, of being sent off to boarding school. As a young woman, Diana Vreeland, the famed editor of Harper's Bazaar, thought she was ideal for fashion modeling, and Bacall appeared regularly in the magazine. The wife of film director Howard Hawks saw her on a magazine cover and recommended her as film material, and she went to Hollywood under a contract. Hawks became her mentor, coaching her on film acting and introducing her to Hollywood society. He was preparing a movie to star Bogart, based on an Ernest Hemingway story, "To Have and Have Not," with a script partly written by William Faulkner. By this time she had acquired the professional name of Lauren, though Bogart and all her friends continued to call her Betty. In "By Myself," she wrote of meeting Bogart: "There was no thunderbolt, no clap of thunder, just a simple how-do-you-do." On her first day of shooting, her hands were shaking so much that she couldn't manage a simple scene of lighting a cigarette. "By the end of the third or fourth take," she wrote in "By Myself," ''I realized that one way to hold my trembling head still was to keep it down, chin almost to my chest and eyes up at Bogart. It worked, and turned out to be the beginning of 'The Look.' " Work led to romance. The 23-year age difference (he called her "Baby") failed to deter them, but they faced a serious obstacle: Bogart was still married to the mercurial actress Mayo Methot, with whom he engaged in much-publicized alcoholic battles. She was persuaded to divorce him, and the lovers were married on May 21, 1945. "When I married Bogie," she remarked in a 1994 interview, "I agreed to put my career second, because he wouldn't marry me otherwise. He'd had three failed marriages to actresses, and he was not about to have another." Still, she appeared in a few films without Bogart: "Confidential Agent" (with Charles Boyer) "Young Man with a Horn," (Kirk Douglas) and "How to Marry a Millionaire," with Marilyn Monroe and Betty Grable. She had son Stephen in 1949 and daughter Leslie in 1952. She also became active politically, joining her husband in protesting the Hollywood blacklist of suspected Communists and campaigning for Democrats. Few could forget the picture of her slouched on top of a piano, long legs dangling, while Harry Truman -- then vice president -- was seated in front of the keys. But the party began to wind down in March 1956, when Bogart was diagnosed with cancer of the esophagus. On the night of Jan. 14, 1957, Bogart grabbed his wife's arm and muttered, "Goodbye, kid." He died in the early morning at the age of 57. After a period of mourning, Bacall became romantically involved with Sinatra. When an "engagement" was mistakenly leaked by press agent "Swifty" Lazar," the singer blamed her, and he terminated the romance. "Actually, Frank did me a great favor -- he saved me from the disaster our marriage would have been," she wrote in "By Myself." Still mourning for Bogart, Bacall left Hollywood in October 1958. She made a film in England, and did a critically panned play that was significant because she would meet her second husband during her time on Broadway: Jason Robards Jr. He was similar to Bogart in that he was an accomplished actor, hard drinker -- and married. After Robards was divorced from his second wife, he and Bacall married in 1961 but Robards' drinking and extramarital affairs resulted in divorce in 1969. "Applause" in 1970 and "Woman of the Year" in 1981 brought Bacall Tony awards. Among her later movies: "Murder on the Orient Express," ''The Shootist" and Robert Altman's "Ready to Wear." She played Nicole Kidman's mother in the 2004 film "Birth," and in recent years appeared as herself in a cameo for "The Sopranos." For decades she lived in Manhattan's venerable Dakota, where neighbors included John Lennon and Yoko Ono. She was ever protective of the Bogart legacy, lashing out at those who tried to profit from his image. Bacall became friends with Faulkner when he was writing scripts for Hawks. One of her prized possessions was a copy of Faulkner's Nobel Prize acceptance speech on which he wrote that she was not one who was satisfied with being just a pretty face, "but rather who decided to prevail." "Notice he didn't write 'survive,' " she told Parade magazine in 1997. "Everyone's a survivor. Everyone wants to stay alive. What's the alternative? See, I prefer to prevail."