It's not the pudding, stupid

Op-ed: Israel of 2014 is a nation state for rich Jews, high-tech workers and generals' children. So don’t talk to us about Zionism.

The Israelis emigrating to Berlin have been called many things in the past week: Weaklings, Nazis, Holocaust deniers and degraders.

Finance Minister Yair Lapid said that we were "anti-Zionist," that we were leaving Israel for cheaper pudding and selling our values. Others say that Israel is clearly too expensive, but that we must stay here and fight from within for God's little acre that our nation has obtained.

Three years ago, the Israeli society united for a real fight, informing its elected representatives that something isn't working and needs to be fixed. I took to the streets too and participated in the protests, because Israel is my country and Hebrew is my language, and – with all honesty – I would rather live in Tel Aviv than in Berlin.

But that protest didn't work. The government changed, but the housing and food prices only soared. I am telling you straightforwardly, there is no point in waiting for elections. There is no point in sticking posts on politicians' walls and "liking" different protests on Facebook in an attempt to influence them. The people may be replaced in elections, the parties may change their names, but the politicians know very well who they work for – and it not for us. 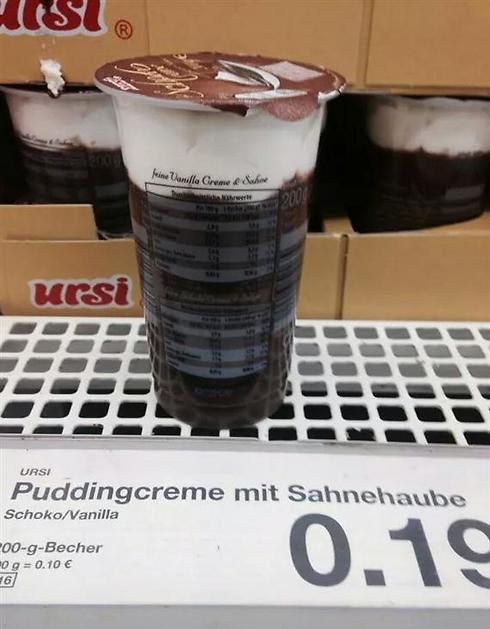 Dairy pudding in Berlin. 'Reducing the price of one product is not enough' (photo from Facebook)

I really don't feel like sitting like a miserable person in a tent on Rothschild Boulevard and hoping that someone will listen to me and help me improve my situation.

I don't know anything about the real estate market, but it seems weird to me that in cool Berlin an apartment costs half a million shekels, while in a Middle Eastern state attacked by missiles people commit to a mortgage for a NIS 1.6 million apartment.

I am saying to the Israeli government point blank: Congratulations, you've defeated us. You've created the exact economy you wanted here. The State of Israel of 2014 is a nation state for rich Jews, for high-tech workers and for generals' children.

Forget about the Israeli government. I am now talking to you, the citizens. Don't put an effort in protesting against public representatives and hoping that someone will listen to you. Vote with your wings. Flock to Ben-Gurion Airport in masses.

The movement I established, Olim LeBerlin ("immigrating to Berlin"), aims to help each and every one of you, both young and old, to escape the violent cost of living in Israel and live in dignity. Why it's clear that if the State of Israel wanted to, it would begin in no time to favor the tenant over the landlord, the junior worker over the tycoon, and your food security over supermarket chains' profit.

I'm not even going to offer the government any ideas. Let the government chase me to Berlin in order to bring me back. And believe me, if we get 100,000 or 200,000 Israelis to emigrate to Berlin, the State of Israel will start changing its policy in favor of us for the first time in decades.

Yes, it's time for Israel to realize that in today's global world it must prove to us every day that it is an attractive place worth living in. Reducing the price of one product a week is not enough. We have already been in this situation three years ago.

And one last thing about my identity. I am 25 years old. I served in the army and I was even an officer for several years. I love Israel and I always defend it in every possible forum to ignorant people who criticize us without understanding anything in the middle of a war.

But I really don't feel like revealing my identity right now. Why? Because the moment the politicians and the media have a name, a face and an address, it's easy to make everything personal, it's easy to tease, it’s easy to mock. It's much easier to slander a person than to deal with the message that person is trying to convey.

And my message is clear: Take care of yourselves and of your future. Israel gave up on you long ago, and it will start looking for you when it starts caring about you.

See you in Berlin!