Analysis: Hezbollah will respond to deaths of six fighters and six Iranians in a strike in Syria; meanwhile, Israel has apparently sent a clear message.

The Israel Defense Forces' latest (alleged) strike against Hezbollah was a harsh slap in the face of the terror organization and a major coup for Israeli intelligence. Two missiles fired from a helicopter claimed the lives of six senior Hezbollah members and six officers from the Iranian Revolutionary Guard.

Among those killed was Jihad Mughniyeh, Hezbollah's commander of the Syrian Golan sector and the son of Imad Mughniyeh, the former chief of Hezbollah's operations who was assassinated in 2008. The question is: Just how far has Israel stuck its neck out with the targeted-killing operation attributed to it, and has it opened the door to a confrontation with Hezbollah along the northern border?

Nasrallah threatened and got hit

The purported Israeli airstrike constitutes a sharp and clear response to an interview Hezbollah leader Hassan Nasrallah gave last week to Beirut-based television station Al Mayadeen in which he threatened Israel with a flare-up in the Golan area and the conquest of the Galilee. And the operation served as a unique opportunity to eliminate in one go a large number of senior Hezbollah officials who were engaged in constructing the future threat to the State of Israel – the Golan Heights front.

Israel's message is clear – zero tolerance for any Hezbollah presence along the Syrian border. The organization was hoping to firmly establish a presence in southern Syria for several reasons. Firstly, vital Syrian positions in the Quneitra province fell last August into the hands of the rebels, and the Syrian regime thus lost control of a large portion of the Golan Heights border area for the first time in some 40 years. This has allowed the rebels to move closer not only to the border with Israel but also to southern Lebanon, an area that is home to a Shia majority and is controlled by Hezbollah. 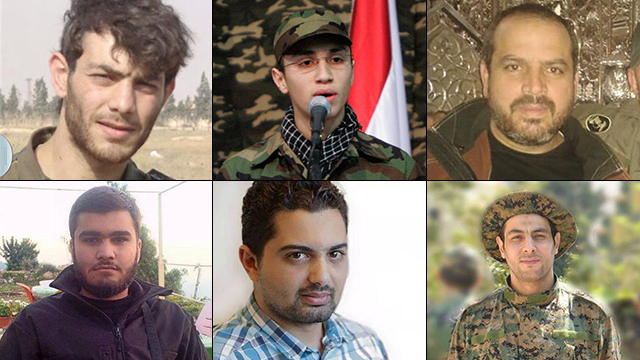 The six Hezbollah fighters killed in the strike

A Hezbollah stronghold in the area is therefore a must in order to protect the southern border against infiltrations by the Sunni opposition. Hezbollah's presence in the area is supposed to compensate for the weakness of the Syrian Army. In addition, the vacuum created on the Golan Heights offers Hezbollah an opportunity to enter a region from which it has never before operated.

The talk now in the organization is of a long front with Israel, from Rosh Hanikra in the west to the Golan in the east. Senior Iranian Revolutionary Guard officials are currently operating in areas along the Golan border that still remain under Syrian control with the purpose of opening a new front against Israel. That's why Iranian officials were also killed in the latest strike.

Israel and the Syrian rebels?

According to Hezbollah, Israel has been helping the rebels since the beginning of the unrest in Syria in an effort to break the Hezbollah-Syrian regime-Iran axis of resistance. The organization's television station, Al-Manar, broadcasts ongoing reports about Israeli aid in the form of arms, money and intelligence to the various rebel groups – the Free Syrian Army, the Islamic Front, and even Jabhat al-Nusra (an al-Qaeda affiliate).

From Hezbollah's perspective, the medical treatment Israel sometimes provides to wounded rebel fighters is proof of the Israeli support for the rebels in general. Israel, Hezbollah officials also say, recruits collaborators from among the patients. These claims position Israel, as the force behind the rebels, against Iran, which supports the Syrian regime and Hezbollah. 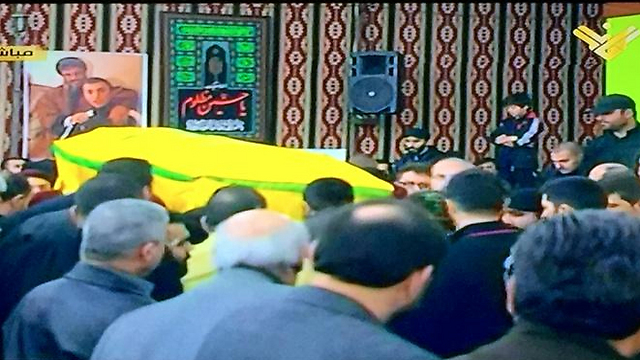 The funeral for Jihad Mughniyeh

In actual fact, there is no evidence of active Israeli aid to the rebels, and all the reports on the matter are conspiratorial or merely theoretical. Nevertheless, the war Israel is waging against Hezbollah certainly weakens the Syrian regime and helps the rebels. Since the outbreak of the civil war, Israel has carried out a number of airstrikes against Syrian military targets to prevent the transfer of weapons to Hezbollah, primarily missiles and perhaps even chemical weapons.

When it comes to the Syrian rebels, it's a case of the enemy of my enemy is my enemy too. Most of the Syrian opposition forces promote radical Islamic and Salafist viewpoints. Most view the so-called Zionist enemy as the next objective after the destruction of the regime of the "Alawite infidels" and the eradication of "the Shias' Hezb al-Shaitan (Party of Satan)."

Many of the Sunni rebels' positions are adorned with black flags and al-Qaeda symbols, and many of the rebels dream of marching to Al-Aqsa Mosque after their conquest of Syrian and Lebanon. It's unlikely that the Americans are taking this into account when they speak of their intentions to train the rebels.

In December, the rebels achieved a significant breakthrough in northwest Syria, following the conquest of Daraa and part of Quneitra in the south. Large Syrian military bases in the Idlib province, south of Aleppo, fell to the rebels, and the Jabhat al-Nusra group in particular. The new situation poses a threat to the passage of troops and ammunition between the Latakia coastline and the Damascus area, and also allows the opposition forces to threaten the Alawite sect's powerbase in northwest Syria. 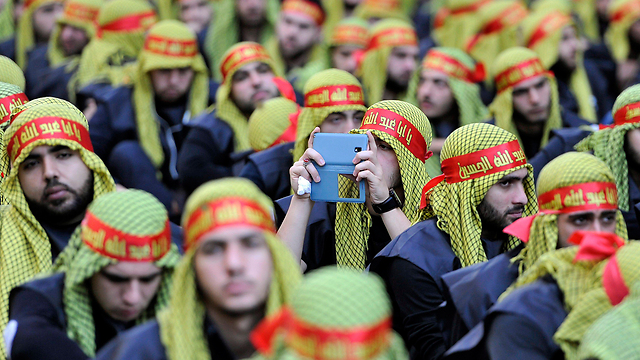 The current weakness of the Syrian regime and Hezbollah stems from the economic crisis affecting their major sponsors – Russia and Iran. Saudi Arabia's slashing of oil prices quickly reflects on the civil war in Syria. Russia and Iran are struggling to meet the huge costs of the never-ending war against the rebels and the survival of Bashar Assad's regime. The West's sanctions on Iran and Russia, due to the nuclear issue and the events in Ukraine respectively, are making things even more difficult.

Israel chose the perfect timing from its perspective. Not only is Hezbollah deeply embroiled in the civil war in Syria, but the entire axis of resistance itself is in crisis and cannot afford to open a front against the "Zionist enemy" at this point in time.

Hezbollah activists are currently threatening Israel ("Prepare your bomb shelters!") and calling for vengeance. But Hezbollah's leadership is well aware of the force of the Israeli response.

The deterrence is still strong

According to some reports, Hezbollah is in possession of around 100,000 long-range rockets and has gained extensive combat experience during the war in Syria. But Hezbollah has been careful not to reopen the Lebanese arena since the end of the Second Lebanon War of 2006, in which close to 700 of its fighters were killed and around 1,000 were wounded.

Pundits writing for Lebanon's An-Nahar newspaper believe that Hezbollah will refrain from responding to the targeted killings in the short term. And if it does choose to respond, they say, it will do so only from the Golan Heights so as to prevent reopening the Lebanese front while it is still involved in the fighting in Syria.

Nasrallah's threat to avenge the death of the latest victims will join the threats heard in the past to avenge the killing of Mughniyeh Sr. and other high-ranking officials in the organization. Hezbollah is unlikely to take action that would prompt a large-scale Israeli response, and will wait for a more "convenient" time to exact revenge.