After Adi Lederman is arrested for allegedly hacking into computers of singers and selling their songs online, American pop star thanks local authorities, as suspect is remanded to house arrest.

The Israeli musician arrested for allegedly hacking several musicians' computers, stealing unreleased tracks and leaking them onto the internet has been named as Adi Lederman.

Lederman, who starred in Israel's version of "A Star is Born" ("Kochav Nolad"), was arrested Wednesday for the hacking. His name was cleared for publication Thursday and the police are requesting he be remanded to house arrest.

Revolution of Love?
Madonna angers fans with call for Mideast ceasefire
Amit Cotler
American superstar attacked by Israeli Instagram followers after posting picture of murdered Arab youth Mohammed Abu Khdeir. In response, she adds picture of three murdered Israeli teens.
Madonna angers fans with call for Mideast ceasefire
An undercover investigation by the Internet crime unit of Israel's anti-fraud police resulted in his detainment and US Federal Bureau of Investigation spokesman Joshua Campbell said the arrest of the Tel Aviv resident was the result of an ongoing investigation by the FBI and Israeli authorities. "This case highlights the international scope of online criminal activity and the need for close cooperation between nations as we collectively identify and bring to justice those who pose a threat in cyberspace," Campbell said.

"I am profoundly grateful to the FBI, the Israeli Police investigators and anyone else who helped lead to the arrest of this hacker," pop legend Madonna wrote in wake of the arrest.

"Like any citizen, I have the right to privacy. This invasion into my life - creatively, professionally and personally remains a deeply devastating and hurtful experience, as it must be for all artists who are victims of this type of crime," she said in a statement.

The investigation began after a complaint by Guy Oseary, Madonna's Israeli-born manager. An expert in Internet crime was sent to New York City to inspect the superstar's computers, where he confirmed a hack originating in Israel.

Demos from Madonna's upcoming album "Rebel Heart" were leaked on December 17. The singer responded with outrage on her social media accounts.

“This is artistic rape!! These are early leaked demos, half of which won’t even make it on my album,” she insisted following the initial leak, calling it a form of terror. 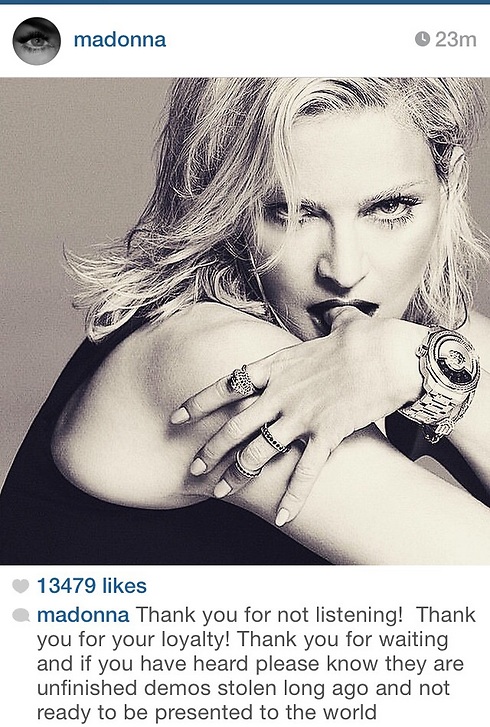 Israeli private investigator Asher Wizman said Madonna's team contacted his company several weeks ago to look into the matter after rumors of an Israeli connection to the leak.

"Our investigator found her computers, at home and at a studio, were broken into from a computer in Israel," Wizman said. "We tracked down the computer, and the man behind it. After gathering enough evidence, we turned to the police and he was arrested today." According to the police, the man "is suspected of computer hacking, copyright violation and fraudulent receipt of goods," a police spokesman said. "During the investigation it appeared the suspect had broken into the computers of a number of international artists, stolen unreleased demos and final tracks and sold them over the internet," the spokesman said. No charges have yet been filed.

Madonna, a devotee of Kabbalah, or Jewish mysticism, has visited Israel several times and chose Tel Aviv to kick off her 2012 world tour. Her ties to Israel's music industry have expanded in recent years, particularly following her collaboration with Israeli DJ and producer Offer Nissim.

After Nissim performed as a warm-up act at Madonna's 2012 concert in Ramat Gan, she invited him to warm up the crowd at her concert in Turkey.

Last week an official remix by Nissim of Madonna's latest single, "Living for Love", was released. Madonna launched the remix on her official Facebook page.

Reuters and Amit Cotler contributed to this report