'Netanyahu is considered by many Americans to be the Churchill of our time'
Photo: AFP

Op-ed: Obama and Israel's center-left political camp in are panicking at the prospect of again having to witness the respect and adoration America has for one of the best prime ministers Israel ever had.

Polls in the United States show that not only does the American public overwhelmingly support Israel, but that their opinions are more aligned with Prime Minister Benjamin Netanyahu’s stand on Iran and radical Islam than with those of US President Barack Obama.

However, the center-left political camp and the leftist media in Israel and abroad seem demonically possessed with fear mongering Israeli voters into thinking that Netanyahu’s upcoming congressional speech and policy disagreement with Obama, will endanger and undermine the important Israel-US alliance.

Daily, they write another opinion piece or quote another so called US- Israel expert that describes another probable hypothetical doomsday scenario of what will happen to Israel and its relationship with the US if Netanyahu speaks out against a bad nuclear deal with the Ayatollahs' Iran and in favor of additional sanctions.

They warn Israelis of an Obama administration backlash such as cutting the $3 billion in military aid to Israel and refraining from using the American veto power against anti-Israel UN Security council resolutions.

Now they tell us that if Netanyahu is re-elected this disagreement will develop to an irreversible crisis and to a fall- off in American support which will affect Israel’s economy and security.

Listening to these "experts" would be funny if it was not so sad that some Israeli voters will actually mistake these baseless worse case scenarios for the truth. 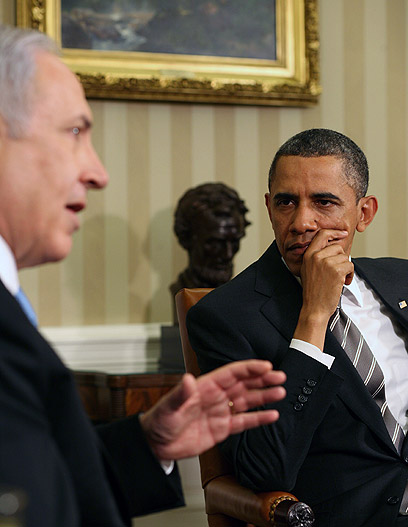 Obama is aware of Netanyahu‘s star power and his effect on Congress (Photo: MCT)

Both Democrats and Republicans in Congress are big supporters of Israel in large part because of their constituents' support of the Jewish state. President Obama, for the last six years has been trying to undermine that public support by trying to create "daylight" between the US and Israel by manufacturing many public spats and artificial crisis with Netanyahu. However, polls reveal that he has failed miserably in achieving his aim.

In 2014, as it does every year, Gallup, in its World Affairs Survey, asked Americans whether they view various countries favorably or unfavorably. Fully 72% of Americans have a "very favorable" or "mostly favorable" view of Israel. Now compare that to the number who told Gallup that they have a favorable view of the other countries or entities in Israel’s neighborhood: Egypt: 45%; Saudi Arabia: 35%; Libya: 19%; Palestinian Authority: 19%; Iraq: 16%; Syria: 13%; Iran: 12%.

Moreover, Gallup polls show that when asked about American sympathy to Israel and to the Arab Nations, the average support for Israel for the last six years while Netanyahu has been Prime Minister has been 62% which is higher than any previous time.

Moreover, a Fox News poll of American registered voters from January 25-27, 2015 which was conducted under the joint direction of Democratic and Republican Research companies revealed that 70% of voters say Obama has not been tough enough on Iran. That number has remained roughly the same since 2009. That tally includes 57% of Democrats, 66% of Independents and 87% of Republicans.

In addition, a 62% majority thinks military force will be necessary to keep Iran from developing nuclear weapons, while 28% say that goal can be reached through diplomacy and existing sanctions alone. Here again, there’s agreement across political party lines.

Second, anybody who is familiar with the US Constitution knows about the concept of separation of powers. Obama is the president but the Republican Congress is the only body who determines the aid package to Israel and Obama cannot touch it.

Moreover, the Congress could decide to cut US aid to the UN for adopting anti- Israel resolutions and to the Palestinian Authority in retaliation for joining War Crimes court or ICC or seeking another UN Security Council bid for statehood. In addition, the Republican majority could use its leverage against any anti- Israel actions the President would wish to take by threatening to withhold the purse strings to finance his political agenda.

Third, the real reason Obama does not want Netanyahu to speak is that he fears that Netanyahu will reveal to the public the truth of how Obama has been begging the Iranians to make a nuclear deal and has already given in to 80% of Iranian demands and has received nothing in return.

To override Obama‘s veto, the Senate needs the votes of 67 members. Ten Senate Democrats on January 27 sent a letter to Obama warning that after March 24, they will be joining 54 Republican Senators on the Senate floor in support of imposing additional sanctions if Iran fails to reach a comprehensive agreement for a political framework.

Obama is aware of Netanyahu‘s star power and his effect on Congress. In fact, when Netanyahu previously addressed a joint session of Congress on May 24, 2011, the New York Times reported that "Mr. Netanyahu received so many standing ovations that at times it appeared that the lawmakers were listening to his speech standing up." Even worse, from Obama’s perspective, The Times reported that Netanyahu’s speech "had many of the trappings of a presidential State of the Union address."

Now we know why the center-left political camp in Israel, the leftist media and Obama are panicked at the prospect of again having to witness the respect and adoration that America has for one of the best prime ministers that Israel ever had, who is considered by many Americans to be the Churchill of our time.