Analysis: If Iran succeeds in its plan to nationalize Golan Heights and gain control of Damascus basin, Israel will wake up to a much more complicated regional reality; tense relationship with US administration is making things even more difficult.

As the nuclear agreement between Washington and Tehran takes shape, and as Prime Minister Benjamin Netanyahu attempts to thwart it, we should not underestimate the importance of the situation in Syria, which is not only exacting a bloody toll at a rate of more than 100 people a day, but is also becoming a strategic threat to Israel which is just as serious as the Iranian threat.

Iran is fully taking the reins over the situation in Syria. The Iranians are working closely with President Bashar Assad, citing the "need to protect him." In practice, not a single military decision is implemented without them. Iran no longer trusts Hezbollah, whose performance so far has produced insufficient achievements.

The Revolutionary Guards commanders have taken command of the Golan Heights front down to the southern city of Daraa. Over 10,000 Shiite volunteers from Iran, Iraq and Afghanistan have been sent to Syria to fill the ranks and curb the rebels' major Sunni offensive towards Damascus.

This is all happening of course over the dissolving Syrian army's head and over Assad himself, who is turning into a puppet counting down its days and watching its lost country.

Israel is watching the Iranization taking place about 10 kilometers from its border with great concern. Iran is in fact taking the place of the enemy from Damascus, which has been Israel's "most convenient" enemy for four decades.

Washington, which wants to reach a nuclear agreement at almost all costs, is turning a blind eye. Moscow, which has already given up on Assad and has come to terms with the fact that it will likely never see the money for the weapons it supplied him with, is completely shutting its eyes. 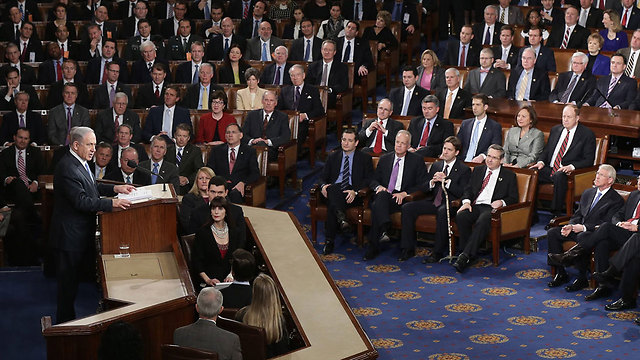 Netanyahu's Congress speech. Reaching strategic understandings with Washington is much more urgent than the extent of supervision over Iran's nuclear program in 10 years (Photo: AFP)

Iran is implementing an extremely realistic strategy and taking advantage of the American disorientation in the area. It's already clear that the Western coalition's response is too little, too late. The United States is sticking to a tactic of dismantling the Islamic State by adding more and more force, but is completely blind to the changes in the balance of power in the region. The US is in fact supporting the transfer of control over Damascus to the Iranians for a shaky nuclear agreement, for a bargain price: Two (Damascus plus Yemen) for the price of one.

The Islamic State is only expanding its wingspan. While the Americans are striking in northern Iraq, ISIS has already expanded its activity to 10 other countries in the world, including north and east Africa, Yemen, Afghanistan, Pakistan, Indonesia, etc.

US President Barack Obama refuses to acknowledge the existence of radical Islamic terror ("there is Islam, and there is terrorism…") and chooses to ignore the fact that the Sunnis' Islamic war against the Shiites is an established fact. But ISIS is gaining power and influence and growing stronger in a geometric series as a fanatic religious and viral phenomenon. Even the attempt to prevent ISIS from gaining control of Libya is being led by Egypt today, not by any of the Western countries.

While Israel is concerned about the Iranian expansion to its northern border, the tense relationship with the White House is making things very difficult. Will the prime minister's Congress speech, over Obama's head, really stop the agreement or only encourage it? That's unclear. But it will definitely not advance the strategic understandings with the administration in Washington, which Israel must reach at this time. And this is a much urgent matter than the extent of the supervision over the nuclear program in 10 years from now.

Israel must carefully monitor the developments. On the one hand, we should avoid getting entangled in a war we're not part of. But on the other hand, if Iran succeeds in its plan to nationalize the Golan and gain control of the Damascus basin, Israel will wake up to a new regional reality which will be much more complicated than Hezbollah – a direct and broad Iranian front which Israel has yet to experience.