Netanyahu at Congress. His warm welcome did not extend to the Democrats
Photo: AFP

An American administration with a grudge

Analysis: Obama is praying for change of leadership in Israel; if Netanyahu gets in again, his new government might find less than full US support on key issues.

There is no reason to be overly impressed by the extent of Prime Minister Benjamin Netanyahu's warm welcome by Congress on Tuesday. It is merely part and parcel of Anglo-Saxon political culture. Nor should one be overly impressed by claims from President Barack Obama and his administration about "close ties to Israel" or the Americans' "rock solid commitment" to defend the Jewish state.

The fact that there is a need to keep making such statements on a regular basis is indicative of the shaky relationship in reality. The deep rift between Netanyahu and Obama and the rest of the Democrats still remains.
Congress Address
Netanyahu's top priority is elections, not Iran
Nahum Barnea
Analysis: Instead of garnering the Democratic members' support in order to torpedo the Iranian nuclear deal, the prime minister's Congress speech only served to alienate them.
Netanyahu's top priority is elections, not Iran

Since Netanyahu accepted John Boehner's invitation to address Congress, the Obama administration has waged all-out war on the prime minister. It is not for nothing that the White House chose to bracket Netanyahu's address to the pro-Israel lobby AIPAC last Monday with speeches from National Security Advisor Susan Rice and US Ambassador to the United Nations Samantha Power. 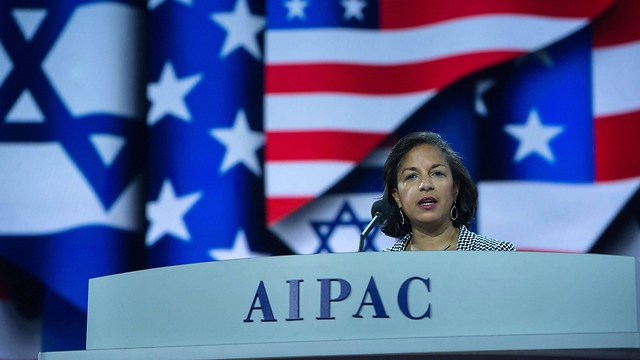 National Security Advisor Susan Rice addresses AIPAC (Photo: AFP)
Rice warned of serious damage to the US relationship with Israel, while Power was there possibly to signal the end of automatic US support for Israel at the UN. Obama and his administration spared no effort in painting Netanyahu as someone whose strategic assessments on Iran were failures, who had nothing new to offer and who did not present any serious alternative to the president's policy.

The rift in relations with the Democratic Party was evident in the Congress speech. On stage behind Netanyahu were two Republicans: Speaker of the House John Boehner, who had invited Netanyahu, and beside him Senator Orrin Hatch, replacing Democratic Vice President Biden, who skipped the event.

The demonstrable absence of dozens of Democratic members of Congress and the pointed remarks by Democratic House Minority Leader Nancy Pelosi, who described the speech as "an insult to the intelligence of the United States", illustrate the magnitude of the Democrats' hostility to Netanyahu.

It is very doubtful that the speech will have any impact on the negotiations with Iran, or on the agreement that they aim to yield. There are still large gaps between the negotiating parties on substantive issues, such as the timetable for lifting the sanctions on Iran, the system of inspections, the time period for inspections, and penalties for violation of key sections of the agreement.

Obama is eager to get the agreement, which he sees as an important foreign policy achievement - an area in which he has had limited success since the start of his term.

Even so, Iran's policy of tough negotiation could well end up being a purely theoretical maneuver, because even if the parties do reach an agreement, Congress could make its implementation difficult.

International treaties require a two-thirds majority for ratification, which means 67 senators. Obama has already announced that the agreement with Iran is not a treaty, and therefore does not intend to pass it to the Senate for ratification. 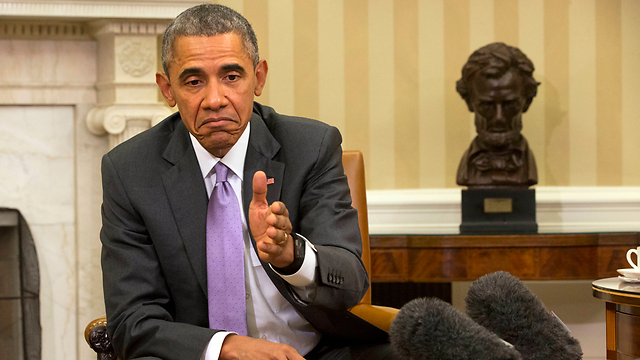 Obama responds to Netanyahu's speech: It had nothing new (Photo: Reuters)
After Netanyahu's speech, the Republican Senate majority leader, Mitch McConnell, said he has proposed a bill to class the agreement with Iran as a treaty. Obama announced in response that he would veto any such legislation. To override a veto by the president also requires a two-third majority in the Senate. The Republicans have 54 senators and the Democrats and the independents caucusing with them have 46. In view of the rift in relations with the Democratic Party, it is highly unlikely that McConnell can muster the 67 senators to overturn Obama's veto.

Meanwhile, Obama awaits the election results from Israel and hopes that a change of government is in the offing. If not, and Netanyahu puts together a narrow government comprising only the right and the ultra-Orthodox, Israel may have to deal with an administration holding a grudge, one that it will be impossible to rely upon for support in issues critical to Israel.

Some of these issues, such as a UN Security Council resolution demanding that Israel withdraw from the West Bank to the 1967 borders within two years, are waiting just around the corner.