The strange comeback of Gideon Sa'ar

Op-ed: If former interior minister does have state's best interest in mind, he should tell us what he really thinks about Netanyahu – or at least keep quiet – rather than join prime minister's campaign.

What happened to the most radiant, promising person who retired from Israeli politics, that he needs to make such a strange comeback, straight into the election campaign?

Gideon Sa'ar is the pretty face of the Likud. A bit less bombastic, a bit more reliable. He wasn't a professional nice guy. For a long time he was, for example, against interfering with the High Court's authorities. When the High Court appeared to be crossing red lines, like the time it struck down the anti-infiltration law, Sa'ar changed direction and supported legislation which would increase the separation of powers. Prime Minister Benjamin Netanyahu was actually against it.

When he felt that it was time to deal with the issue of Tel Aviv businesses that operate on Shabbat, he initiated a change which infuriated many people, including in the Likud. He thought he was right and didn't give up on what he believed.

When Sa'ar retired from politics, only about half a year ago, it was because he knew what many people at the top know. That things cannot go on like this. He knew it wasn't a political matter. He knew it was a national matter. He didn't speak out against Netanyahu. He preferred a thunderous silence. Moshe Kahlon was in the same situation before him, and he retired for the same reasons. I wonder who's next. 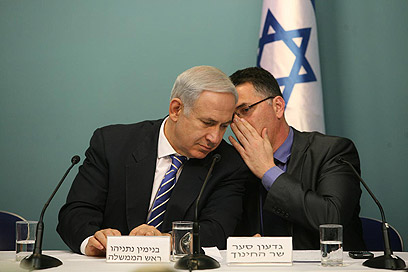 Sa'ar, one of the leading candidates to replace Netanyahu if the Likud loses the elections, is afraid of being perceived as the politician who left at a time of distress (Photo: Gil Yohanan)

Sa'ar is coming back into the arena. It's perfectly clear why the Likud has called him up. There is a real problem. In-depth surveys show that despite the endless series of spins, some of the Likud supporters have had enough. One-third of Likud voters are not in the party's pocket. Their views are closer to the political center and even to the center-left. This one-third is no longer excited by gimmicks and spins.

In the past few days, as Netanyahu increased his focus on Iran, it turned out that the spillover was getting serious. There is no need for one-third of the Likud voters to leave the party. If only a third of the third abandon the Likud, we will have a political upheaval here in less than two weeks.

It's already happening. The Likud may have regained a seat or two in the polls following Netanyahu's successful Congress speech, but public opinion changes guarantee that this recovery won't last more than a few days.

This is the exact point in time when Sa'ar feels he should enter the picture. After all, he is one of the leading candidates to replace Netanyahu, if the Likud indeed loses the elections. Sa'ar is afraid of the clear statement he made by retiring. He is afraid of being perceived as the politician who left at a time of distress.

Opportunism and cynicism are part of the regular rules of the game in politics. Whoever wants to enter the prime minister's bureau must play with different cards. If he does sees the state's best interest in front of his eyes rather than his own personal interest, Sa'ar should be expected to say what he really thinks about Netanyahu – or at least keep quiet – rather than engage in personal calculations.

Sa'ar knows that he has to be in the position of the person who volunteered to help the party at its time of need. So he is volunteering. He is in the picture. This will unlikely help the Likud in the polls, but it will help Sa'ar in the polls.