Signs of a Saudi-led military intervention in Yemen are growing. Saudi Foreign Minister Prince Saud al-Faisal said in a clear voice during a press conference with his British counterpart on Monday that if the anarchy in Yemen is not solved peacefully, the Gulf states will take the "necessary measures" to protect the region from the "aggression" of the Houthis and their allies – the Iranian-backed forces of former Yemeni president Ali Abdullah Saleh. On Tuesday night it was reported that the Saudis were increasing their threat and moving forces to the border with Yemen.
Arab World
Netanyahu's win is convenient for Arab leaders
Smadar Perry
Analysis: The Egyptian, Jordanian, Saudi and Gulf state rulers trust Israel's re-elected prime minister to handle the Iranian issue, and the Americans to pressure him on the Palestinian issue.
Netanyahu's win is convenient for Arab leaders
Al-Faisal harshly attacked Iran over its policy in the entire region and on the nuclear issue. His comments were perceived as a real threat of a Saudi military intervention in Yemen. He spoke a day after learning that the foreign minister of Yemen's ousted president, Abed-Rabbo Mansour Hadi, who fled the Houthis after they had taken over the capital of Sana'a and is governing from the city of Aden, had asked the Gulf Cooperation Council to intervene in the Yemeni crisis through a joint force of the Arabian Peninsula states. 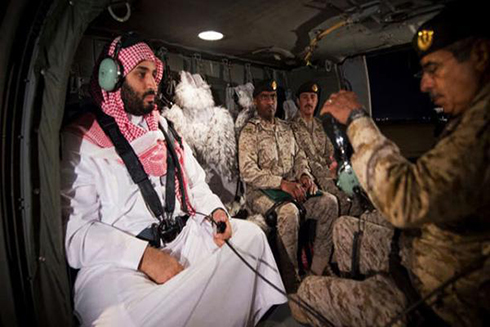 Saudi 'muscle flexing': Defense minister tours the border with Yemen
"We are prepared to accept all of President Hadi's requests for the sake of the Yemini people and their stability," the kingdom's No. 1 diplomat clarified during the press conference. Hadi's foreign minister, Riad Yassin, told al-Jazeera that the Gulf states had accepted Yemeni's request. He said that "arrangements are taking place," but failed to mention what kind of procedures were being implemented and if and when the forces begin would operating on the ground. Kuwaiti Foreign Ministry Undersecretary Khalid Al-Jarallah, however, sounded skeptical about a Gulf military intervention in Yemen. 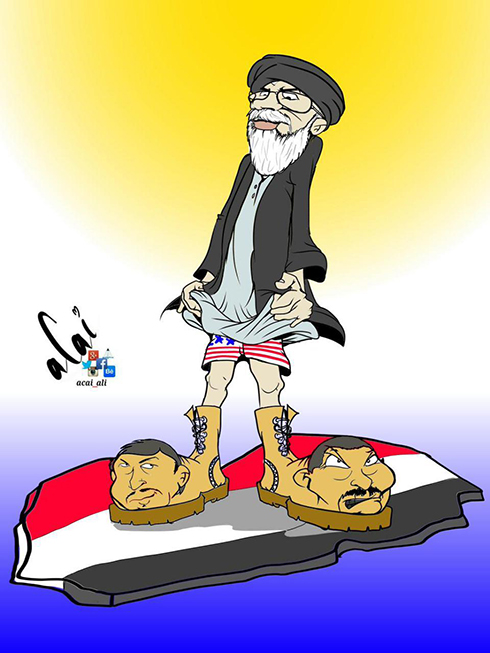 Arab cartoon: Khamenei and Iran negotiate with the US while crushing Yemen

The Al-Quds Al-Arabi newspaper reported Tuesday that the Saudi leadership was working in the highest ranks and consulting other Gulf states on ways to intervene in Yemen in order to help President Hadi maintain his constitutional legitimacy, which is decreasing from day to day, as the Tehran-backed Shiite rebels advance.

In the meantime, Saudi Arabia is settling for a moderate "muscle flexing": In recent days, the Saudi defense minister, Prince Mohammad bin Salman (the king's son), toured the Jizan region in the southern part of the kingdom, near the border with Yemen, escorted by senior Saudi military officials. Sources in the international community are trying to form a dialogue between the Houthis and the ousted Yemeni president's supporters in a bid to prevent an Arab military intervention, but so far it seems that the Shiites are not interested in such a dialogue. Moreover, a senior Shiite rebel even threatened that if Saudi Arabia were to intervene in Yemen militarily, it would be the end of the Saudi royal family. 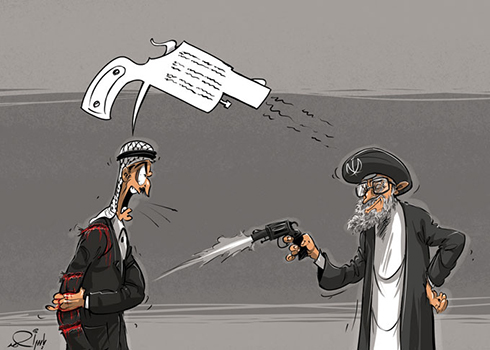 Arab cartoon: Iran is hitting the great Arab force, which is doing nothing, without batting an eyelid
Saudi Arabia will likely weigh its options very carefully before deciding to militarily intervene in Yemen. While Yemen is Saudi Arabia's backyard, and it definitely doesn’t want to see its major Shiite rival – Iran – settling down there, Riyadh hasn't forgotten the lesson Egypt learned in Yemen. In the 1960s, in the Gamal Abdel Nasser era, Egypt intervened in the civil war in Yemen and emerged beaten and injured. Confronting Iran's allies is also something which should be considered very carefully before taking action.

In any event, the talks about a possible military intervention may breathe some life into the Peninsula Shield Force – a joint military force created by Saudi Arabia, the United Arab Emirates, Kuwait, Qatar, Bahrain and Oman in 1984 in a bid to defend themselves against external enemies.

The force was last used in March 2011, when Sunni royal family of Bahrain tried to oppress a revolt of the Shiite majority living in the country, a revolt which was ignited by the opposition and encouraged and supported by Iran. The Shield Force is a well-trained force which includes more than 30,000 officers and soldiers – 21,000 of whom are real fighters. In Bahrain they helped the local forces secure strategic facilities during the 2011 riots. In 2003, the Gulf states agreed to deploy the force in Kuwait for fear of an Iraqi response to the invasion of Iraq. After Iraqi president Saddam Hussein was toppled, there were talks about dismantling the force, but it continued to exist and may now be called back into action. The question is what will happen if the Gulf states take the serious step of sending the Shield Force to Yemen, and especially how Tehran will respond. The ousted Yemeni president is expected to attend the Arab League summit, which begins in Cairo this Saturday. Tehran, we can be sure, will be very attentive to what is said there.