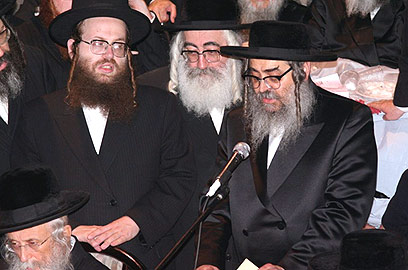 Leader of world's largest Hasidic dynasty slams Shas and United Torah Judaism for joining Netanyahu's fourth government, says their faith in state's leadership is like 'trusting a dog not to bite you.'

While Israel's ultra-Orthodox parties won a major political victory last week upon their return to the government with generous coalition agreements, the anti-Zionist circles insisted on spoiling the party. The Satmar rebbe, one of the prominent Jewish Orthodox leaders in the world, slammed the central haredi factions in Israel and their rabbis for joining Prime Minister Benjamin Netanyahu's fourth government and accused them of "selling the Torah for lucre."
Haredi Demands
Stop calling haredim 'extortionists'
Yerach Toker
Op-ed: As citizens of Israel, the ultra-Orthodox are entitled to ask the state to properly fund the important world of Torah study.
Stop calling haredim 'extortionists'
He added that Shas and United Torah Judaism's faith in the state's leadership was like "trusting a dog not to bite you." Rabbi Aaron Teitelbaum heads one of the two rival factions in Satmar, the world's largest Hasidic dynasty, which is famous for its opposition to secular Zionism and the State of Israel. Hours after the new government was sworn in, he delivered a firm speech at a special fundraiser in New York for Satmar's institutions in Israel, which refuse to be funded by the state.

Rabbi Aaron Teitelbaum. 'The haredim, who will have already tasted the taste of money, won't leave the government but will legitimize the draft law' (Photo: Kol Haolam Kulo)
The rebbe ruled that even those who don't study Torah are not allowed to join the IDF because "whoever arrives at the army as a haredi leaves half secular." He added that the Equal Share of the Burden Law was enacted by seculars while the haredim fought it, but that the amendment planned at Shas and UTJ's request would allegedly make it "kosher," thereby preventing a haredi protests against it.

"The haredim are ready to sell all this for the money they receive, and in return for that they are selling the entire Torah," the rebbe argued.

He said he believed the move to soften the law would not succeed, as the High Court of Justice would not approve the removal of the criminal sanctions, and then "the haredim, who will have already tasted the taste of money, won't leave the government but will legitimize the draft law."

"It's like the famous story about the Jew who arrived at the land owner's home, and the land owner's dog began barking at him. The Jew escaped for fear of the dog. The land owner said to him: 'Don't worry, this dog doesn’t bite, he's a good dog.' The Jews replied: 'Should I trust the dog's integrity that he won't bite me?'

"I am saying the same thing: Can we trust the integrity of the dog, the defense minister, that he won't draft everyone? What if a defense minister with teeth arrives, who is capable of biting?

"We will insist that the agreements won't be implemented, and we won't compromise over any Jews – regardless of whether he studies Torah or not," the Satmar rebbe declared. "As long as he is Jewish, as long as his forefathers' feet stood on Mount Sinai, he must not go to the army, no matter how much money the yeshivot receive out of it."