'Every cultural show which empathizes with murderers is an absurdity'
Photo: Gil Yohanan 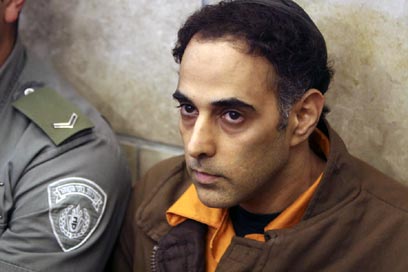 A festival in the service of murderers

Op-ed: Film about prime minister's assassin and play about IDF soldier's murderer are a cynical use of freedom of expression and artistic freedom in order to advance murderous ideologies.

He did it out of love for his homeland. He is a hero. It's true that he murdered - maybe one person, maybe many, maybe masses. But he was created human, and a human side can be found in every single person.

So why don't we produce a film or a play about them, or an audiovisual show? After all, we are talking about intriguing figures. We are talking about artistic freedom. And if anyone says otherwise, we'll sign petitions and turn him into a fascist.

So we are in the middle of a festival, a festival in the service of murderers. Only a few days ago, we wanted to believe that in order to understand the extent of the absurdity regarding murderer Walid Daka – who has inspired a play that is being performed at the Al-Midan Theater in Haifa these days – we should ask ourselves what would happen in case of an "artistic work" glorifying the image of former prime minister Yitzhak Rabin's assassin, Yigal Amir.

And now it's happening. Both Amir and Baruch Goldstein did what they did, as we all know, out of their "love of the homeland." And if we only ask those who share these two men's opinion, they will tell us that they were good-hearted people who were in distress. And their goal was wonderful.

Yigal Amir. What's the next stage? A show about Adolf Hitler's human side? (Photo: Hagai Aharon)

So in order to present the absurdity, there is a need to go one step further. There is no longer a need to compare Daka to Amir and Amir to Daka. It's possible, just possible, that the next stage will be a show about Adolf Hitler. He did everything "out of love of the homeland" too. And if we only ask a few souls in Germany who identify with him, they will tell us about his human sides. You have to know, they will say. You have to understand. He was in distress in light of the evil Jews who were threatening humanity. We know, it was the "Jewish occupation" which took over the economy, the press, the universities. And he, that man, wasn't even a tyrant. All he wanted to do was to save humanity.

In the past, the Jerusalem Film Festival took pride in screening films affiliated with the left. Now, in the name of artistic freedom, a film with a scent of insanity from the right is receiving a seal of approval too. It's safe to assume that the mega-rapist is also waiting for his turn. After all, he has a human side too. He is also someone's victim, perhaps the victim of the defying permissiveness.

If we haven't lost our common sense yet, there is no need to give a stage to hatred. Not at the Al-Midan Theater in Haifa, not at the Jerusalem Film Festival, and not in Munich, which may still put on a play about the life of the tormented Hitler, who had – and how did we not know that – a wonderful soul.