Scene of Friday's terror attack in France. It's not Muslims, it's Islamists
Photo: AFP 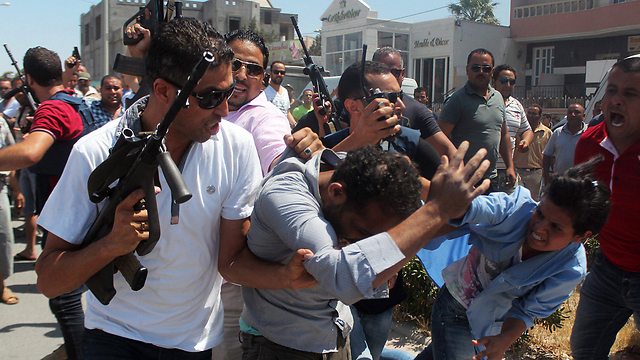 It's time to change the rules of the game

Op-ed: Thousands of young people from Western countries have joined the Islamic Stat's Jihad Army in recent years, and there is no end in the horizon; in order to fight the Islamist terror, the free world must conduct a reassessment.

Terror is a global thing. It has nothing to do with the Israeli-Arab conflict in general, or with the Israeli-Palestinian conflict in particular. Too many in the world – the "forces of progress" brigades, which have a lot of power in the global media and in Western academia – it's still unclear. But last Friday, global jihad sent three additional clarifications – in France, in Tunisia and in Kuwait.

Why? This question is raised repeatedly. What the hell do they want? Some would like to think that it's the West's fault. It's the colonialism, it's the oppression, it's the exploitation, it's the humiliation, it's the discrimination. But there is something flawed in this excuse: There are millions of poor and exploited people in the world, and they don't blow up anyone and don’t commit suicide. Only the Islamists do it.

It's not Muslims. It's Islamists. The excuse of humiliation and distress is becoming particularly foolish, because this terror is mainly directed at Muslims. Terror makes much more headlines when it takes place in the West, but it's only a small part, a particle, of global jihad's terrorist activities.

More than 99% of terror victims in the world in recent years have been Muslim. We don’t know about most of them because they don’t interest anyone. They are definitely not the representatives of colonialism. We usually have no idea why they even being massacred.

Terror in Tunisia. More than 99% of terror victims in the world in recent years have been Muslim (Photo: EPA)

Massacres are not only carried out by Sunnis against Shiites. And not that there is any justification for that. Most acts of terror in the world are carried out by Sunnis against Sunnis. The rhetoric is anti-Western, anti-American and anti-Israeli, but the real activity is anti-Muslim. So the attempt to provide "justifications" for terror, in accordance with the post-colonial school, is ridiculous. It's nonsense.

But the terror is approaching the West. It is threatening. Thousands of young people from Western countries have joined the Islamic Stat's Jihad Army in recent years. According to data compiled by the National Counterterrorism Center (NCTC), we are talking about 1,200 recruits from France, 600 from Britain, 600 from Germany, 1,500 from Russia, 120 from the United States, etc. The numbers keep rising. More than 100 Muslims have even left the faraway Australia to murder other Muslims. And there is no end in the horizon.

As reports of the horror increase, the motivation to join grows. The record actually belongs to one of the most moderate countries in the Arab world – 3,000 recruits from Tunisia. Saudi Arabia is in the second place with 2,500, followed by Jordan and Morocco with 1,500 volunteers each.

The search for logic is doomed to fail. There is no common denominator between the recruits. Some are unemployed reckless people looking for extreme sports, while others are graduates of prestigious universities, engineers and doctors. Sometimes we are talking about self-radicalization through the Internet. Sometimes it's Qatar, which has replaced Saudi Arabia and funds a considerable part of the Wahabi stream's preachers who are active in the West.

In order to fight terror, the free world must conduct a reassessment. If the number of recruits is rising, if the threats are only growing, if there is more radicalization – the rules of the game much be changed.

For example, should incitement and recruitment websites remain active under the protection of freedom of expression? Should the huge funding arriving from Qatar be stopped through legislation? Should activists affiliated with jihad or imams nurturing radicalization be expelled?

The free world knows that the answers to these questions are at its doorstep. It is finding it difficult to deal with them.