There is no peace, no security, and Israel is still voting for Bibi
Photo: AFP 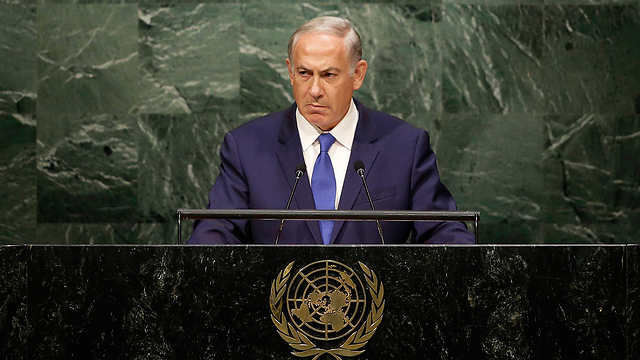 Op-ed: How did Netanyahu succeed in branding himself as the only person capable of giving Israel's citizens a sense of security, while in reality we are moving from one security failure to another?

On Sunday, the eve of Simchat Torah, an El Al plane brought Mr. Security back from New York. The man, who only a few months ago ran in the elections on the security ticket, landed in a country on fire, where the last thing citizens feel these days is a sense of security.

Three days earlier, Mr. Security stood silent on the United Nations podium - a 44-second silence aiming to symbolize the world's indifference to Iran and its silence in light of Iran's threats to destroy Israel. Benjamin Netanyahu is not the first leader to use silence to try to convey a message. It has been used before him by leaders with whom Netanyahu would not want to be compared. But in a sort of dissonance that only a reality like ours can generate, the silence in the glorious auditorium in New York turned into an allegory of Netanyahu's helplessness, weakness, inability and futility of his actions.

That's what happened when the victims' screams, the crying of the babies whose parents died before their eyes and a nine-year-old boy's Kaddish prayer on his parents' graves were drained into this silence within a short period of time. Suddenly, Netanyahu's silence vis-à-vis all this noise became ridiculous, and the new gimmick turned into a bitter joke at the prime minister's expense.

Netanyahu's silence at the UN General Assembly turned into an allegory of his helplessness, weakness, inability and futility of his actions. (Photo: AP)

It's not the world that is silent, Mr. Prime Minister. It’s you who is silent. And you are not just silent. You are not doing anything either. On the holiday eve, in an emergency discussion held at the Kirya Base in Tel Aviv, Netanyahu asked for the opinion of the defense establishment heads. "Is this an intifada?" he asked. "It's not an intifada," they said soothingly, "it's a wave of terror."

In the evening, the coalition chairman and head of the Knesset's Foreign Affairs and Defense Committee, Knesset Member Tzachi Hanegbi, repeated the title given by the security heads to what is happening in the West Bank and Jerusalem these days. "It's not a third intifada," Hanegbi stated decisively in Channel 2's Friday night news broadcast, "it’s a wave of terror." As if the name makes the difference.

The insistence to call what looks like an intifada and acts like an intifada by a different name reminds me of the military and security establishment's insistence to call a war an operation. Former Chief of Staff Dan Halutz insisted on referring to the Second Lebanon War as an operation, and the wars in Gaza were given different names of operations. These "operations" turn into wars only in retrospect, and the public and media are the ones which give them their names.

That is also the difference between an intifada and a wave of terror: A wave is a slightly amorphous issue. It goes up and down. It is sometimes strong and sometimes moderate. An intifada is a war. It threatens. It compels. It requires a special mobilization, special responsibility. And in general, a wave of terror is preferable. After all, we have the No. 1 expert on terror, Netanyahu.

Although all those present in the emergency discussion know from many years of experience that pressure only makes the security situation deteriorate, they nonetheless decided on a series of inspirational moves which can make us proud: Speeding up the demolition of houses, boosting the presence of IDF and police forces, administrative detentions, removing instigators from the Temple Mount.

And we, I must say, thought that this had all been done at the start of this "wave of terror." Wasn't this done in the past few months when Jerusalem was already burning with Molotov cocktails, stone throwing and vehicular and shooting attacks? And if not - why not?

The public feeling is that things are not being done the way they should. Too much time is invested in futile chatter. In politics. Even these days, Netanyahu is being pushed by two opposing political forces, which are looking for an opportunity to benefit from the riots: On one hand, the opposition, which has rushed to accuse the government of powerlessness over things it would not have done differently had it been in power. On the other hand, Netanyahu's allies in the coalition, who are voicing different accusations against the government they serve in, while demanding that it carry out things which would have the effect of pouring a jerrycan of fuel into a fire - speeding up and boosting construction in Judea and Samaria and in East Jerusalem.

And the highlight: Three ministers - Zeev Elkin, Yariv Levin and Haim Katz - who participated on Monday evening in a protest against the government they serve in, after Deputy Foreign Minister Tzipi Hotovely sat with the protestors outside the prime minister's residence. What else is in store? A deputy defense minister protesting outside the Defense Ministry?

This is indeed a mystery with no answer, on how Netanyahu succeeded in branding himself as the only person capable of giving us security, while in reality we are moving from one security failure to another, from a war to an uprising, from one threat to another. Netanyahu has been in charge of the security of Israel's citizens for the past six years. That's a long time not only in Middle Eastern terms. What happened all these years? What changed? Of all the promises we received, the election statements, the pompous speeches - what was fulfilled?