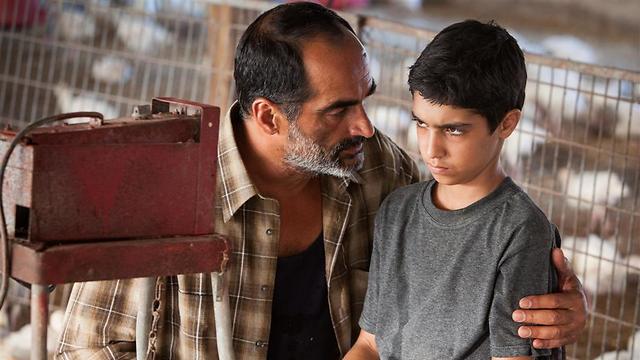 Is Israel's Oscar entry a 'Zionist plot' against Iran?

Iranian media accuse Persian-speaking film 'Baba Joon' of being a Zionist propaganda movie aimed at disconnecting Jews of Iranian descent from their heritage and brainwashing them.

There are two Persian-speaking films this year among the 81 entries in the foreign-language film category for the 88th Academy Awards. One of them is "Muhammad: The Messenger of God," which is representing Iran - a comprehensive epic about the life and work of Prophet Muhammad. The second, surprisingly, comes from Israel - the ayatollah regime's rival in the international arena. The film, "Baba Joon," director Yuval Delshad's first full-length motion picture, focuses on a family of immigrants of Iranian descent.
Stranger than Fiction
Gidi Gov ad nearly causes diplomatic incident with Iran
Yael Walzer
Israeli actor and singer films Bezeq commercial in Kiev depicting Iranians kidnapping civilians when Iranian embassy officials arrive, necessitating some creative thinking.
Gidi Gov ad nearly causes diplomatic incident with Iran
The Persian language should be a connecting and compromising element, at least culturally, between the two countries. But there are those in Tehran who suspect that "Baba Joon" is actually a Zionist propaganda film, which seeks to disconnect the Jews who emigrated from Iran from their heritage and brainwash them. For example, Milad Jalalzada from Iran's Young Journalist Club, who wrote an article about the film, under the headline "The new dish of the occupying chef' with language spices."

He begins his article by stating that "everything the Israelis will do surely contains no good intention towards us," and tries to uncover the secret Zionist plot behind "Baba Joon," a film he never watched, of course. "The first Israeli film in the Persian language is being released within the borders of the regime occupying Jerusalem, and they are trying to conceal their plot. Even if we put aside the assumption that every move made by the Zionists is accompanied by malicious intentions against us, there are still many suspicious points."

After describing the plot summary of "Baba Joon," which tells the story of a teenager named Moti who comes with his family to the "occupied lands" and rebels against his family's tradition, Jalazada wonders: "We should ask who are the people who are supposed to see this film? What is the message that are supposed to receive from watching 'Baba Joon'? Rebel against your fathers' traditions? Your fathers' traditions are not so important? Wow."

According to the writer's theory, which he says is based on the fact that "the Zionists have attacked the foundations of Iranian culture many times," this is an attempt to brainwash Israeli citizens of Iranian descent. "It's possible that most of the Iranian Jews who were encouraged by the Zionists to immigrate to the occupied lands, and now live in that area, still miss their real homeland, and that could be dangerous for the occupying regime. So the Zionist occupying elite must take moves to prepare artistic work, in order to distance this group of immigrants as much as possible from the roots of their fathers' traditions and from their real homeland."

In order to support his baseless theory, Jalazada uses the Israelis' "ethnic demon," stating that "examples of such projects were explained in connection with European and American Jews who arrived there. Clearly, a country with an egoistic regime, whose citizens don't have a grain of love for their homeland, is required to keep them away from their origins - in order to unite the population.

"The government members in the occupying Zionist regime must take measures to ensure that the colors distinctions and the differences between the ethnic groups in the state will be blurred." The writer goes on to say that through films like "Baba Joon," Israeli society is trying to reduce the cultural gap between Ashkenazim and Sephardim. "On the one hand, they want to deprive Persian speakers around the world (especially the Iranians) of their ancient identity, and on the other hand to cut off the accessibility of those who have ties with this culture between the borders of the occupied state," the writer explains. "That's why we see that everything they do against us is usually somehow related to the issues of history and our ancient heritage. We should remember the comments made by Benjamin Netanyahu after his UN speech. Netanyahu, who is considered the most hated leader in the world by our foreign minister, said in an interview to the BBC: 'I am still a student of the history of Iran.' This sentence alone shows what they're up to." Alongside this "reasoned" article, Iranian media have been filled with warnings and arguments against "Baba Joon," and mainly against its American star Navid Negahban, known as the terrorist Abu Nazir in the "Homeland" series. In "Baba Joon," Negahban plays the father of the family, Yitzhak, the owner of a Turkey farm in a moshav in northern Israel. The 47-year-old actor, who made it in Hollywood after fleeing Iran at the age of 20, is accused of being anti-Iranian and anti-Muslim.

Navid Negahban, one of the stars of 'Baba Joon.' The great Satan? (Photo: Yoray Liberman)

Veteran Iranian-born American actor David Diaan is being criticized for his participation in the film (as Yitzhak's brother) and has also been accused of being anti-Iranian.

Some are also questioning the intentions of the film's director, who wrote the script based on his childhood memories in Moshav Zrahia in southern Israel, where the film was shot. One of the Iranian news networks noted that Moshav Zrahia was built in 1955 on the ruins of a Palestinian village.

Director Yuval Delshad. Grew up in Moshav Zrahia, which was built on the ruins of a Palestinian village (Photo: Yoray Liberman)

Meanwhile, the Iranian cultural institutions are keeping quiet and ignoring Delshad's family drama for now. In 2013, after "Argo" won the Oscar for Best Picture, then-Iranian President Mahmoud Ahmadinejad and his people accused Ben Affleck's film of distorting the facts regarding the rescue of American Embassy employees during the Khomeini revolution. A year later, Iran even boycotted the Academy Award ceremony.

"Baba Joon" has yet to be included among the five final nominees for an Academy Award, so the Iranian authorities will unlikely boycott the Oscars once again. There are those in the country, however, who are warning the residents not to be tempted to watch the Israeli film, despite its Persian language.

The Kingpedia website has turned to the Iranian audience, asking it to "take part in the effort to prevent young people and families from watching this Zionist and anti-Iranian film. If you spot this film on any website, you must report it to the legal authorities so that the site will be blocked. That way, we will be able to hit the mouths of the Zionists and the film's director with a powerful punch."