'If we give up our presence in the Temple Mount, the wave of violence wil only intensify
Photo: AFP 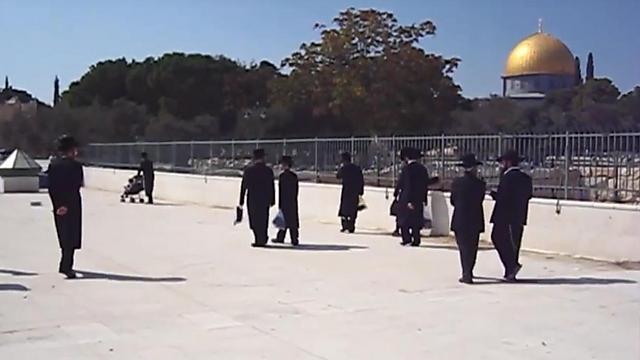 Israel must make no concessions on Temple Mount

Op-ed: If Israel gives up Jews' right to visit the holy site in an effort to prevent further terrorist attacks, the next battle will be against Jews’ right to visit or pray at all Jewish holy sites such as the Western Wall.

If Israel gives up the right of Jews to visit the Temple Mount in an effort to prevent further terrorist attacks, the next battle will be against Jews’ right to visit or pray at all Jewish holy sites such as the Western Wall.

Israel must reject any attempt by the Muslim Arabs in Israel, the Palestinian Authority and Jordan, as well as US President Barack Obama, Secretary of State John Kerry, France, the European Union and the United Nations to diminish the Jewish people's historical rights to the Temple Mount, including Israel's sole sovereignty over the site as well the right of any Jew to visit and worship on it.

I am not an observant Jew, or a settler or any other so-called provocateur, but merely a Jew who still believes in the historical truth that the Temple Mount is still the holiest site of the Jews as it has been for the last 3,000 years, as the place where the two Jewish holy temples stood.

For me or any other Jew, visiting the Temple Mount is not about harming the sanctity of the Mosque or trying to deny the Muslims’ right to pray and worship in the Mosque, or attempting to humiliate or provoke the Muslims. It is to claim my own right, as in any democratic country, to exercise my freedom of travel and religion throughout the land of my ancestors and my past.

Visiting the Temple Mount is not about trying to deny the Muslims’ right to pray and worship in the mosque, it is to claim my own right as a Jew to exercise my freedom of travel and religion throughout the land of my ancestors (Photo: Temple Movements)

Since 1967, Israel has created and maintained a status quo on the Temple Mount, that began when it regained control of the Old City of Jerusalem and voluntarily handed back the administration of the Islamic sites at the Temple Mount, including the Al-Aqsa Mosque and the Dome of Rock to Islamic administrators known as the Waqf.

The status quo on the Temple Mount has been that Jews and Christians have been allowed to visit the site at specific times but are not allowed to pray, while Muslims are allowed to visit and pray there all the times. Despite the campaign of anti-Israeli libel, this status quo has remained the policy of subsequent Israeli governments, and 3.5 million Muslims visited and prayed at the site just last year compared to 200,000 Christians and only12, 500 Jews.

Reality shows that the Palestinian Authority, the Jordanians and the Islamic Movement in Israel are the ones who are determined to change the status quo through a wave of terror to intimidate and blackmail Israelis in order to eventually prevent Jews from ever visiting the site. It was just reported that Jordan and the Palestinians Authority are seeking from Israel, in exchange for restoring calm, the total oversight by the Islamic Waqf of the entire Temple Mount, including control over Jewish visits to the site.

But much worse, Muslim mobs are trying to stop Israeli citizens from even practicing their right to free speech as their fellow Muslim extremists tried to do in France in an effort to stop the cartoonists who dared to draw cartoons of Muhammad. The present wave of terror occurred not because of Jewish or government actions regarding the Mount, but because a minority of Jews in Israel who disagreed with the Netanyahu government, dared to talk publicly about the issue of changing the status quo to allow Jews to pray there side by side with Muslims or to visit the site daily.

To save Jewish lives I am willing not to try to change the status quo at the Temple Mount at the present time, but it is morally wrong to stand by when the Muslims are trying to terrorize not only Israel but the entire Western World from exercising their own rights to freedom of speech, press and religion. The Muslim world is conducting a religious war and demanding total submission from the West to their religious intolerance while the West, including Europe and the Obama Administration, are finding excuses for their violence.

Throwing Israel under the bus while demanding more concessions regarding the Temple Mount will not save Europe or the United States from Islamic terrorism. Israel is in the forefront of that war and must reject those demands which will lead to a slippery slope for all.

The French suggestion in the UN Security Council that UN observers should be deployed on the Mount to supervise the status quo, and the Palestinian Authority demands from UNESCO that it should declare the Western Wall, the Tomb of Rachel and Cave of the Patriarchs as Muslim sites and part of Arab Palestine, must be rejected by all. The Arabs’ actions of terror against Jews and the burning of the Tomb of Joseph, a Jewish holy site, must be categorically condemned.

From 1949 to 1967, the Jordanians controlled the Old City and the West Bank was under their rule. There was no access to Jewish holy sites, including the Western Wall, Cave of the Patriarchs, and Rachel's Tomb. Many ancient Jewish synagogues in the Jewish quarter were destroyed by the Jordanians and the ancient Jewish cemetery was desecrated.

Prior to 1967, as a child, I used to visit my grandfather who lived on Mammilla Street in Jerusalem, very close to the no man zone outside the Jaffa Gate in the Old City. At the time Jordanian snipers stood on the Old City walls and try to shoot any Israeli who was in West Jerusalem. As a four- to six-year-old kid, I used to crawl out of my grandfather's house to avoid being randomly shot by snipers only for being a Jew in West Jerusalem.

I was seven years old when I visited the Temple Mount for the first time, as did thousands of other Jews and Israelis following the Six-Day War. I still remember how exciting it was to step on that holy ground, walking in the steps of our high priests and Jewish Kings from thousands years ago, and freely praying. Later, the then-liberal Israeli government decided to create the new status quo.

When I visited the site during the last decade, the experience became a humiliating disgrace for any Jew. At the entrance to the Temple Mount, tourists wearing a yarmulke were forced by the Israeli security guards to remove it, because it angered the Muslims. My book of Psalms was taken from me by the guards, as if it were a bomb or a weapon, and I was warned not to try to pray loudly or move my lips in any space on the Mount itself. I was followed by the Muslim guards on the mount and was spied on.

I learned my lesson, and the next time I pretended to be an American tourist and hired Arab tour guides who were recommended by the mosque as "experts" on the history of Jerusalem. I had to be exposed to a campaign of anti-Jewish and anti-Israeli historical lies and incitement in order to freely visit the Mount.

They informed me that Jerusalem never was Jewish or the capital of the Jewish state, but only Muslim and the capital of Arab "Palestine"; that there were never Jewish temples in Jerusalem; that it was not Isaac who was almost sacrificed by Abraham on the Mount but Ishmael, and that Abraham was never a Jew but a Muslim. They also stated that the Western Wall was never a Jewish site but the Al-Buraq Wall where Muhammad tied his donkey before ascending to Heaven .

If we give up on our presence in the Temple Mount, the wave of violence will not subside but only intensify into a tsunami, as will the Islamists’ outrageous demands.

Shoula Romano Horing is an attorney, born and raised in Israel. Her blog can be found here: www.shoularomanohoring.com.