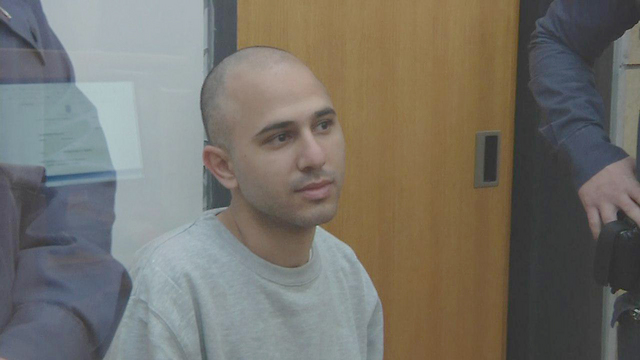 The chilling details of the case of Nadav Sela, who butchered his wife and children, as well as his neighbor’s son in the small town of Migdal, are revealed after indictment is filed against him; Sela accused of quadruple homicide and attempted murder; his motive still remains unclear; indictment details how he kicked one of his victims in the head ‘to make sure he was dead.’

An indictment was filed on Thursday against Nadav Sela, 29, who was arrested late January for the brutally murdering his wife Dor, 23, their two children Benjamin and Yosef, both toddlers, and the neighbors' son Nahman Atia, 11.

He was also indicted for the attempted murder of Nahman's 10-year-old brother Natan.

Sela's remand was extended by three weeks to allow the defense to study the case in greater detail.

A preliminary psychiatric evaluation presented after Sela spent nearly three weeks under observation found that he is fit to stand trial for his alleged crimes. Judge Yifat Shitrit agreed Thursday morning to admit Sela for a comprehensive psychiatric evaluation, as per the request of the district psychiatrist.

The indictment filed against Sela to Nazareth District Court outlines the grisly details of his killing spree, the motive for which remains unknown.

Given the brutality of the details, Judge Shitrit accepted the prosecution's request to publish only a redacted version of it, which omits the harrowing scene of the murders.

On the afternoon of January 28. Dor Crasanti, Sela's wife, was preparing lunch in the kitchen when Sela allegedly walked in, grabbed a chef's knife and proceeded to stab her all over her body. "Dor begged him to stop and even tried defending herself, but to no avail," the indictment describes.

Three of the victims: Dor Crasanti and her two children, Benjamin and Yosef

At the time two of the neighbors' children, the late Nahman Atia and his brother Natan, were playing in the living room. When the two noticed what was happening they tried escaping through the living room window but were spotted by Sela, who ran at them, stabbing Natan repeatedly.

After trying to resist and beg him to stop, Natan was stabbed by Sela in the head, fell down and played dead. Sela then turned to his brother Nahman, stabbed him to death and threw him down the basement stairs.

Sela then slit the throat of his 20-month-old son Yosef, who was also in the living room, and from there made his way to his 8-month-old son Benjamin's bed and murdered him.

The indictment also notes that after noticing Nathan’s body move he returned and kicked him in his head to "make sure he was dead."

"After the accused was assured that all of the people present in the house were dead, he went to his bedroom, changed his clothes and shoes, and escaped through the back door," the indictment reads.

When Natan heard the defendant leave the house, he approached Dor's body and asked if he's alive. Noticing that he was not responding, the terrified Natan began crying before attempting to exit through the front door. However, after noticing that it was locked, he forced the living room window open through which he was able to escape.

"Natan walked several blocks until he reached a main road, where a driver spotted him and stopped to call for help," the indictment continues.

Superintendent Ofer Osta, head of the Israel Police northern district's homicide unit who is leading the investigation, described the case as ”one of the most difficult crime scenes that I’ve witnessed in my long service with the Israel Police."

"The first report was from a citizen who found a bleeding child near the town's minimarket," Osta said. "He just told us that the indicted individual murdered his brother."

Almost immediately after that the police received a distressing call from Eitan Crasanti, Dor's father, who arrived at the house and noticed the open window. When he looked inside, he saw the horrific scene.

Sela escaped to an olive grove at the outskirts of town, and was caught by two patrol officers who were hailed there after they spotted him, gave chase and managed to apprehend him.

Sela was brought to the police station where after checks police found no traces of alcohol or drugs in his blood.

The police have Natan's testimony, as well as hard forensic evidence against Sela proving that he committed the crimes.

"The million dollar question of this case is the motive," Osta asserts. "During questioning, he just repeated, 'I murdered everyone at home because they were Amalekites.'

"We checked the materials he was studying, in the Torah study center as well as in his home. There are mentions of the Amalekites in the holy books he was studying. We tried getting answers from him but to no avail. There is a passage like that in a book he was reading, but he couldn’t explain what it meant."

Forensic unit outside the scene of the murders (Photo: Israel police)

Of the 613 commandments followed by Orthodox Jews, one—based on 1 Samuel 15.3—orders the destruction of Amalekites and says, "Do not spare them; put to death men and women, children and infants, cattle and sheep, camels and donkeys."

Amalek, though sometimes used to describe an enemy of the Jewish people, was actually the name of an ancient nation of semi-nomadic people who lived in the Negev in ancient Israel, thousands of years ago.

They are believed to have no descendants and are therefore already considered an extinct people.

"It's frustrating when you can't find a motive. Four people were murdered here. You see a completely normal family. They weren’t short of anything. We found love letters between the couple. And then you see a scene like this. You ask yourself a thousand times: why? What drove him to do this? It's something I'm going to keep asking myself for a long time."

Superintendent Osta claims that Sela seemed sane to him, saying that he spent 19 hours with him during his arrest, during which Sela displayed behaviour of sanity, if somewhat detached from reality.

Nevertheless, Sela has since claimed insanity. Hela been brought before the court four times following the murders.

During the first remand hearing, he begged God for forgiveness. In following hearings he exhibited even more peculiar behaviour, saying "I'm a cat" and attempting to stand on all fours while mumbling various Bible passages.

Between the hearings, Sela claimed that in his car accident a few months ago "god protected me, and so I followed his orders 'till the day of the murder."

According to the prosecution, there are several testimonies claiming that during the days before the murder, Sela had contacted individuals in town to apologize for various things.

The testimonies were coherent with statements by Dor’s mother, Ravit Crasanti immediately after the killings, in which she said she was certain that her son-in-law had planned his actions in advance.

"He went and said goodbye to everyone," she said. "On Friday night he sat with me at the table and asked for forgiveness. He said, 'I'm sorry if I hurt you, I'm sorry if I said anything bad about you.' He did the same to other people in the community," she said.

Shortly before Thursday's indictment hearing, Crasanti burst into the hall carrying pictures of her daughter and her dead grandchildren and repeatedly called on Sela to look at them. "You low-life murderer! Just look what you took from us!," she shouted.

Ora Atia, the mother of Natan and the late Nahamn Atia, stated Thursday that she and her remaining family members are not interested in reading the indictment. "We're not interested in picking at scabbed wounds. We're trying to believe that there are intentions here we cannot understand—decisions from up above, that only our creator could explain."

Meanwhile, Natan, the sole survivor of the slaughter, is slowly convalescing from the incident; both physically and mentally.

His father, Israel, says that they believe God will help him recover. "Like he showed mercy for him that day, that is how we will see him heal with God aid’s."

Sela’s father says that he prefers to think about him as little as possible and focus on Natan's recovery.

"All that's written in the indictment is horror and madness. The environment we live in, unfortunately, raises the bar from one incident to the next," Israel added, ending with "I don't believe there is a punishment he can receive in this world, given by any man, that can answer his evil and the pain he caused our family, for whom he showed no mercy.”