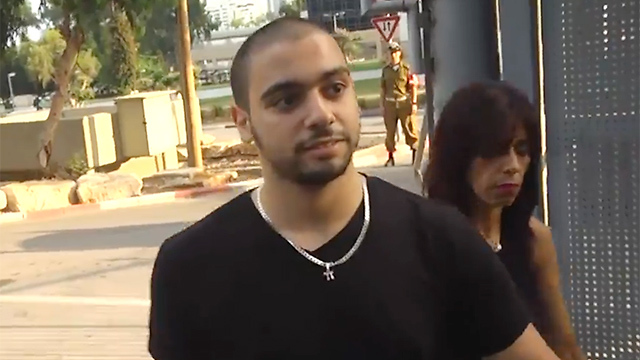 After two-day deliberation, Military Court of Appeals throws out former soldier's request to wait until IDF Chief Eisenkot decides whether or not to commute his sentence; Azaria to begin serving his sentence on Wednesday at Prison 4.

Military Court of Appeals President Maj. Gen. Doron Piles rejected Tuesday a request by former IDF soldier Elor Azaria to postpone his prison sentence of 18 months after being convicted of manslaughter of a neutralized terrorist in Hebron in March 2016.

Azaria is scheduled to arrive on Wednesday morning to Prison 4 in Tzrifin to begin serving his 18-month sentence.

Last week, Azaria asked IDF Chief of Staff Gadi Eisenkot to substitute his sentence for community service, noting, "if I had known in advance what became apparent in hindsight—that there was no explosive device on the body of the terrorist—I would not have shot."

Eisenkot will only be able to discuss Azaria's request after September 7, when the verdict becomes peremptory. For this request to be taken into serious consideration, Azaria would need to both express remorse for his actions and take responsibility for them, neither of which he has done thus far, not even in his request to the IDF chief.

Regardless, Eisenkot is obliged to consult with the Chief Military Advocate General, Brig. Gen. Sharon Afek, for a legal opinion first as well as consult with Azaria's commander before responding.

Azaria entering family car decorated with Israeli flags with his picture and the text: 'Elor Azaria born to be free' (Photo: Shaul Golan)

During the morning hearing Tuesday, the military prosecution expressed its objection to the request.

The disagreement between the two sides revolved around the question of whether the verdict can be defined "peremptory"—meaning it is considered final and cannot be appealed.

Only after the ruling becomes peremptory can Azaria ask the IDF chief for clemency. Despite that, the former soldier made his plea to Eisenkot last week.

Azaria's lawyer Yoram Sheftel claimed Tuesday that because this was "an extremely unusual case, the decisions in it should be unusual. There hasn't been a case in which, while the verdict is still being read out, the IDF chief issued a public statement that if Elor turns to him, he would seriously consider mitigating the punishment. This is a public invitation for Azaria to turn to him for clemency. If our request to convert the prison sentence to community service is accepted, he would not have to go to jail."

He asked for a three-week delay in carrying out the verdict, with the IDF chief making his decision by September 7.

The military prosecutor, Lt. Col. (res.) Nadav Weisman, argued there was a "clear distinction between the legal procedure and the clemency procedure. Azaria's verdict has not yet become peremptory. A convicted felon cannot make a verdict peremptory by announcing he would not appeal (to the Supreme Court). The verdict becomes peremptory only at the end of the period of time determined by law (between September 7 to October 7)."