Hamas leader in Gaza, Yahya Sanwar. Trying to have it both ways
Photo: AP 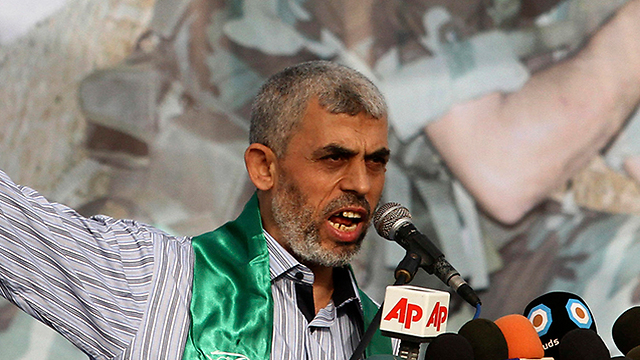 Analysis: Half a year after Hamas pumped new blood into its leadership, the Palestinian terror organization is deepening its strategic ties with the Iran-led Shiite axis and establishing a new foothold in Lebanon, while simultaneously maintaining relations with the Egypt-led Sunni axis.

Shin Bet Director Nadav Argaman noted Sunday during a briefing to the cabinet that Hamas was deepening its strategic ties with the Iran-led Shiite axis and establishing a foothold in Lebanon with Tehran’s support.

The change in Hamas’s axis began half a year ago, when the organization received a new leadership. The previous leadership, led by the domineering Khaled Mashal, consistently chose the Sunni axis led by Saudi Arabia and Egypt. Hamas put a lot of effort into improving its relations with Cairo and Riyadh, at the expense of the Shiite axis.

At first, the leadership left Damascus following the civil war in Syria, after the organization turned its back on the Assad regime and supported the rebels, who were much more homogenous at the time than they are today.

The leadership’s move to Qatar, as well as some other countries, marked the beginning of the decline in the relations between Hamas and Iran, as well as Iran’s allies—Syria and Hezbollah. While the relations between Iran and Hamas were not completely frozen, there was a significant drop in the aid the terror organization received from Tehran, much to the dismay of the military wing.

In a leaked telephone conversation, which was likely intercepted by an intelligence agency in the Middle East, senior Hamas member Moussa Abu Marzouk was heard slamming the Iranians over their failure to help the organization and accusing them of being all talk and no action.

The internal election process in Hamas was completed in February, and the organization’s new political bureau—the leadership body—received new leaders and new blood. The meteoric rise of the militant Yahya Sinwar to the position of Hamas’ leader in Gaza, and the election of some of the members of the pro-Iranian axis, like Saleh al-Arouri, signaled the beginning of a thaw in Hamas’ relations with Iran. Sinwar is also one of the closest people to the Mohammed Deif, the head of Hamas’ military wing, whose interest lies in Iranian aid.

Later on, following external pressure, Qatar decided to deport some of the Hamas leaders who had settled in the country. Those expelled were members of the organization who were offering military guidance to Hamas cells in the West Bank that were operated by al-Arouri.

Al-Arouri left the Gulf with other senior Hamas members and moved to Lebanon, where he began establishing the new foothold. About a month ago, he arrived in Tehran with a senior Hamas delegation and met with top government officials. The visit was a watershed in the relations between Hamas and Iran. Hezbollah, the Islamic Republic’s protégé in Lebanon, likely received an order from its patron to help Hamas settle in as much as it can.

Another indication of the thaw in Hamas’ relations with the pro-Iranian axis was the unusual condemnation statement issued by the organization following the attack on a chemical weapons production facility in Syria last week.

Despite moving publicly and secretly closer to the pro-Iranian axis, Hamas is still trying to have it both ways and is doing everything it can to please Egypt in its battle against the Islamic State in Sinai, in a bid to receive carrots that are unrelated to its military power building efforts.